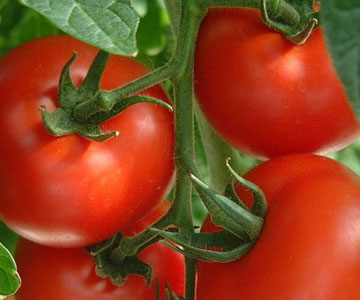 Kearneysville, WV. Every summer from mid-July through early September I become a glutton. I suppose that means I have a weakness. A character flaw that I should be concerned about. To tell the truth, though, I don’t make any effort to control this particular passion. In fact, I indulge it with delight. The object of my affections is the tomato.

I suppose a good share of the blame belongs to my parents. They were avid gardeners and tomatoes were a significant part of the large gardens they grew. I recall some meals in late summer where everything on our plate was either grown in the back yard or killed in the mountains: pan fried elk steak, boiled potatoes, flour and milk gravy made with the drippings from the steak, green beans, corn on the cob. And of course, thick-sliced tomatoes sprinkled with salt and pepper. When I think of that meal, I think of my childhood. It tasted fine.

I enjoyed the food when I was young, but I despised the garden work that made the food possible. I even was so bold as to swear that when I grew up I would never have a garden. Alas, I began growing tomatoes in pots on the deck of our townhouse when I was in graduate school. A few years later we purchased a house with a garden spot. We moved in on May 15. In less than two weeks I had the garden planted: nearly twenty tomato plants, along with plenty of jalapenos and basil. I had in the years since leaving home learned of more ways to prepare tomatoes and couldn’t wait to grow my own. So much for childish vows.

A year or two after my wife and I married (and before the tomato pots on the deck) someone gave us a gift certificate to a small Italian restaurant called “Food for Thought.” The chef was from northern Italy and was a fine ambassador of his nation’s cuisine. To me, having been raised on elk steak, potatoes, and sliced tomatoes, this dining experience was a revelation. Bruschetta. I’d never heard of it. Diced tomatoes with copious amounts of minced garlic and basil on a thin slice of French bread that was dried enough to support the topping. This was followed by homemade cheese tortellini fairly swimming in a creamy pesto sauce with artichoke hearts and of course more garlic. Server: “Would you like more bruschetta?” Me: “Yes, please. It’s delicious.” Feverish aside to my wife: “Do you think we could make this at home?” Now we do.

Tomatoes must be one of the easiest of garden plants to grow. Stick them in a hole, and put a stake or a wire cage in the ground to support them when they get bigger. Give them plenty of water and sunshine, and then wait. My annual goal is to get a ripe tomato by the Fourth of July, but thus far I have failed. A couple of years in a row I purchased plants during a warm spell in April convinced that summer had arrived early and I would get a jump on the season. Twice my tomatoes died of frost, which meant I gained nothing and lost some dollars. The lesson: Be patient. There is a time to plant and a time to harvest. Such reasonable advice is hard for a glutton to swallow.

Fall in Montana. The scent of wood smoke in the crisp air. Hard frost presaging the coming of winter. Green tomatoes hanging on limp vines destined never to turn red. Red tomatoes on the vine turning brown. The garden is done. The only thing left is to pull up the plants and get things ready for winter. However, this also signals the beginning of “the great tomato war.” When the tomatoes are no longer fit to eat, they are still fit projectiles. The green ones, small and solid as rocks, hurt when they hit. The spoiling red ones go splat with a satisfying mushy sound. Slingshots are an excellent alternative to throwing. I vividly recall one skirmish. My Dad shot a tomato at me and missed. I was loaded for bear. He knew it and took off running for the house. His back was a perfect target and the tomato, as mushy as it was, sailed true. I can still see the tomato hitting him between the shoulder blades and splatting across his white shirt. Oh, the thrill of victory!

The remnants of tomato wars at my house now have yielded peculiar results. This year a volunteer tomato plant came up in the sandbox. My wife and oldest son transplanted it to the garden and we’ve been eating its fruit for several weeks now. It produces cherry tomatoes, little nuggets of red wonder, perfect for snacking or, as we do every summer, for dehydrating. Throughout the winter these chewy morsels grace our pastas and pizzas.

We alternate between bruschetta and salsa. My wife’s peach salsa (plenty of ripe tomatoes, onion, jalapeno, fresh peaches, cilantro, red wine vinegar, and olive oil) is enough to base a meal around. I often separate a smaller bowl of diced tomatoes and stir in a couple teaspoons of pureed chipotle peppers in adobo sauce and a sprinkle of cumin. It’s spicy and smoky at the same time.

Most lunches in August I indulge my passion without remorse. Three or four large tomatoes sliced onto a large plate. Drizzle liberally with olive oil, sprinkle with course sea salt and place one leaf of basil on each slice. Perhaps a glass of wine (at lunch!) and a couple slices of pungent cheese. When the tomatoes have been eaten, be sure to tip the plate to your lips and let the olive oil mixed with tomato juice and salt stream down your gullet and dribble down your chin. This is summer at its finest.

By mid-September, the wild craving has subsided. Tonight I ate a plate of sliced tomatoes, but I can tell that after nearly two months, the edge of my passion is dulled. Soon the garden will yield its last tomato and it will rest as will I. The nights are cool now and I can feel a tomato fight approaching. My boys throw pretty well now, and I will not escape unscathed. But I’ll get my licks in as well. And who knows where the volunteers will pop up next year?

My wife and I sometime talk about building a greenhouse. That way we could have fresh produce all year. I like the idea. What tomato glutton wouldn’t? But I fear something would be lost in the process. My season of gluttony is preceded by months of anticipation. Of waiting. Of watching the weather and the calendar to determine the time to plant. It requires careful tending of tiny plants. More waiting. Faithful watering. Anticipation. Expectation. Finally after nearly ten months of fasting, the feast begins. At first only one or two per day but as my fifteen or twenty tomato plants start producing in earnest, I make every effort to keep up, but I can’t, so we can some and share our bounty with the neighbors. A greenhouse would make it possible to feast all year long, but is the meaning of a feast forfeited when the fast is no longer observed? Can the joys of feasting be realized when the limits of the fast are overcome or ignored? For now, we’ll enjoy the fruits of our labor in season, and I will once more set my hopes on a mid-July advent. I’m not sure I have what it takes to be a year-round glutton.