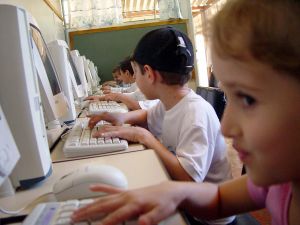 My wife, Shirley, wrote this op-ed for our local newspaper.  Her disagreement is not with any particular school.  It is with our society’s trendy embrace of technology as The Answer to our problems.  She is questioning our obsession with means while neglecting or forgetting the end.  One of Shirley’s sources is The Flickering Mind: The False Promise of Technology in the Classroom and How Learning Can Be Saved by Todd Oppenheimer (Random House, 2003)  This is written about public schools, but I assume private schools and home schools are also susceptible to well-meaning but misguided fads.  -Jeff

Jacksonville, AL.   [ BY SHIRLEY TAYLOR ]   School has started, and students are again “cracking open the books.” Based on recent news reports, this expression may soon become as quaint as asking for a handkerchief.  It seems often there are stories about a new project or a federally-funded program which promises the way to increase student achievement is through the use of more computers.

This wave of technotopia reminds me of a quote: “In 10 years, textbooks as the principal medium of teaching will be as obsolete as the horse and carriage are now.”  Thomas Edison spoke these words in 1925 about the power of the motion picture as the new method of classroom instruction.  Eighty-five years have passed since this prediction was made by a very smart person.  Today, textbook publishers are going strong, students still moan under the weight of heavy backpacks, and curriculum committees pore over review copies.

The good news is that our embrace of technology has enabled researchers to gather data easier and faster than ever.  And guess what?  The data does not always support technology as the quick fix for academic achievement.  The Maine Learning and Technology Initiative in 2001 was the first statewide initiative, with a price tag of nearly $120 million.  Follow-up reports in 2005 stated that overall performance on the 8th grade Maine Education Assessments had not changed appreciably since the inception of the program.  The Journal of Technology, Learning and Assessment has a special issue on laptop programs, and while they mention positive results, they do confess that most programs show only “modest increases in student achievement.”

In June, scholars at Duke University’s Sanford School of Public Policy found that efforts to put computers in every home would actually widen the achievement gap in math and reading scores.  The study included more than 150,000 students, and the data gathered allowed researchers to compare the same children’s reading and math scores before and after they acquired a home computer.  Students in grades 5 through 8, particularly those from disadvantaged families, tended to post lower scores once a computer arrived in their home, the study showed.  It seems kids are kids. They used the computers to play games and socialize, not study.  The researchers concluded that the presence of a parent who assisted the student on the home computer increased productivity.

A recent technology-immersion project in Texas was funded by $20 million in federal money to study comparison data over four years.  The study looked at 22 middle schools where teachers and students received laptops and 22 middle schools that did not receive laptops.  The study, released in January 2009, found that “across four evaluation years, there was no evidence linking technology immersion with student self-directed learning or their general satisfaction with schoolwork.”

Several times in the report, effects on aspects of learning were stated as “statistically insignificant.”  Technology-immersion schools had significantly lower school attendance rates in the first three years compared to students who didn’t have laptops.  I wonder if anybody checked the students’ Facebook pages and Twitter accounts on the days they were absent.  Evidence from the Texas classroom observations suggested that laptops and digital resources would allow students in technology-immersion schools to experience more intellectually-demanding work.  Nevertheless, results for all observed teachers indicated that lessons in core subjects generally failed to intellectually challenge students.

One area where students did make gains was in the area of computer skills.  Catherine Maloney, director of the Texas center, told The New York Times that the schools did their best to mandate that the computers would be used strictly for educational purposes.  Most schools configured the machines to block e-mail, chat, games, and websites reached through searching by objectionable keywords.  The keyword blocks worked fine for English-language sites but they didn’t work for Spanish ones.  “Kids were adept at getting around the blocks,” she said.  Did I mention kids will be kids?

I must disclose that all the studies showed some positive results.  Sometimes you will see results showing that students in laptop programs liked school more, or that discipline problems went down, and certainly that computer skills increased.  But if you wade through the reports and look for results on academic achievement scores, you will find that data is scarce.  You must also think about the researchers who are writing these reports and think about the tremendous pressure they are under to find data that supports spending millions of dollars on laptops, depending on who paid for the study.

It is important to make clear that I like computers. They are powerful and essential tools.  There are two computers in my home.  One of them is a laptop.  As a librarian, I cannot imagine working without an automated library system, Internet access, and online reference databases. I am particularly fond of the Alabama Virtual Library, paid for by our tax dollars.  I hope you visit that site after you finish reading the newspaper.

I also think computers in homes are great.  How could a person create a resume without a computer in today’s world?  With a typewriter?  That is in the attic with the box of handkerchiefs.  When applying for a job you may find that many companies only accept online applications.  Certainly, most employers are looking for employees with computer skills.  This is an area where the real digital divide affects low-income homes.  Here I must plug the free computer resources provided by local public libraries.  Stop by your library and you will see the bridge spanning the digital divide.

I even think it is alright that federal money is spent on technology programs as long as there is data gathered to measure the programs’ effectiveness.  How else can we determine if other schools should try similar programs or what to expect for a $20 million price tag when the results on student achievement are “statistically insignificant?”

If a school wants to provide laptops for students, okay—but don’t sell it by promising higher test scores.  The data is just not there.

Shirley Taylor has worked in public and school libraries for 16 years.  A native of South Dakota, she has a Secondary Education degree and a masters in Library Science.

Avoiding “A World Without Women,” or Porches