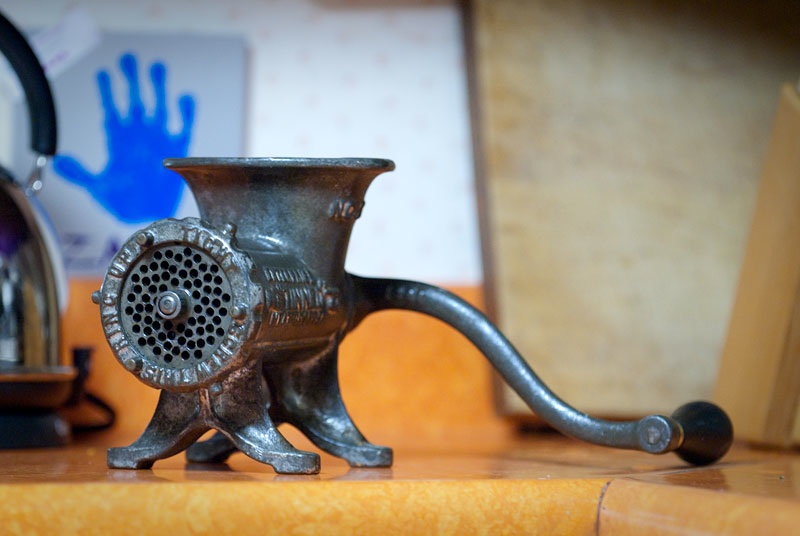 NOTE: This is an article by my wife’s cousin, Jerry Halstead.  Jerry refers to Shirley’s family farm in the opening paragraphs.  I’m a vegetarian, so I won’t be making sausage any time soon, but I find its emphasis on place, family, and tradition to be appealing.  The grandmother Jerry writes about is Christina (Opp) Knapp, who died at the age of 109 years in July.  She was a Christian of the German Reformed variety, with a Lawrence Welk-type German accent.  (LW, from across the state line, played a barn dance which Christina attended when she was young.)  We used to stay at her house when we visited Shirley’s hometown of Eureka, South Dakota.  Grandma Knapp took care of herself in her own home until she was 100.  She was a strong and spunky woman who liked gardening and cooking.  We had a brief family reunion with Jerry and other relatives when we went back home for Grandma’s funeral.  Jerry’s original article can be found here.  He has an interesting how-to website here.    -Jeff

Lebanon, NH.  (By Jerry Halstead)   A number of years back, I inherited my grandma’s old meat grinder.  As life often transpires, I never really took the time or found a project to use it on.  There’s something mysterious and unapproachable about old cooking gear.  Being unfamiliar, you aren’t sure if all of the parts are there.  Did people really use this stuff?  Maybe it is too old to use?  Knowing Grandma, who passed away at the age of 109 this year, she probably used the grinder for fifty years or more.  They were from a generation where nothing was wasted, everything could be repurposed.  Shelves in the garage held stacks of plastic gallon ice cream containers.  Once they lost the ability to store foodstuff (cookies, kuchen), they were relegated to roles in household repair or gardening.  I learned how to straighten and re-use nails from my grandpa.  He had an ice cream pail of bent ones waiting for a new purpose.  In the front yard stood an ancient plastic squirrel, its tail held on with a frugal strip of electrical tape—a beacon to getting the most out of everything.

We spent part of our summers up there at the tippy top of South Dakota, an area once declared the Wheat Capital of the World.  Part of the stay was with the grandparents and the rest was out on the farm with an aunt, uncle, and four cousins.  It was a working farm, meaning you’d feed (and help slaughter) chickens, milk the cows, kill gophers (up to a five-cent reward per tail from the county agent), and help pull rocks out of the fields.  You pretty much were always stepping in something you’d regret, the dog usually had a necklace of ticks, and the Midwest sun beat down as relentless as did the inevitable thunderstorms rolling through each evening.  It was hard, tiring, smelly, dirty work; especially for kids who only did it while on “vacation.”

What made up for it were the meals.  You could never, ever go hungry.  A typical meal might consist of fresh fried chicken, beef sausage, various cheeses, cucumber salad, corn on the cob, beans, fruit jello, a couple forms of bread, and fresh milk followed by an equally rich dessert.  Astonishingly, we never ate enough to satisfy them.

I know for sure that we didn’t appreciate the bounty or what went in to making it.  Everything came from their farm, from their own hands and minds and diligence.  I realize that this is how they were raised and everything was ingrained from years of doing it and there wasn’t much choice.  Still, it is awe inspiring to think of what it takes to raise a family of six when eighty or ninety percent of what you eat is born, raised, slaughtered, and prepared right there on your land.  No quick trip to Walmart or Burger King.  You head down to the cellar for a jar of something you pickled, or slice into a slab of meat cured and smoked last fall.

I reflect on those childhood days whenever I try a new project like sausage making.  If I ever were to invent a time machine, or a way to peek into the past, going back and observing my relatives would be the first stop.  Learn how they made cheese.  See how they cured and smoked the sausages and dried beef.  When did they do it, what equipment, how was the smokehouse made, where did they cure things?  Lots of unanswered questions.

In the last month, I’ve been experimenting with the old meat grinder and learning to make sausage.  It’s a very interesting process that can be summed up with this quote from Art and Practice of Sausage Making: “Sausage making is a continuous sequence of events.  Each step in the proper sequence is important to a successful operation.”  I chuckled the first time I read that, as I did with their term “thermal processing.”  But on reflection it really is a good description and since you aren’t always “cooking” the meat, depending on the type of sausage, thermal processing is a more apt term as well.

The first challenge in making sausage is figuring out what to make and which recipe to follow.  So far I’ve been combining a bit of “This looks interesting” with “I have these ingredients” when making a selection.  This weekend I started off intent on some kind of sage-flavored sausage and ended up making an Andouille because it looked more interesting.  My cooking style involves studying a bunch of recipes, figuring out the salient points and ingredients, internalizing the concept, and then using recipes as aids in choosing quantities.  More bluntly: I wing it with some help from the Internet.

My sis gave me a ceramic cooker/smoker for my 50th, which I’ve been using a lot.  It’s really good for a variety of cooking styles, including the low and steady heat needed for hot smoking sausages.  Saturday was Dad’s day off, so in addition to yard work and other chores, I de-boned a four pound hunk of pork and cut the meat into small cubes.  It didn’t have enough fat (they suggest around 20% for sausage) so I picked up a bit of salt pork—it being the only thing the local store had available—and cubed that up.  For spicing, I mostly followed this recipe, although I’ll admit the quantity of cayenne pepper was cut down considerably so the rest of the family would enjoy it.  Once the spices were all ready, it was mixed into the bowl of meat chunks and put into the freezer for a while.  Having the meat really cold, almost frozen, does two things.  First, it makes it easier for the grinder blade to do its job and secondly it keeps the fat from getting soft and melting from the mechanical action.  Some recipes go so far as to suggest the grinder be chilled and the bowl to receive the ground meat set in another bowl of ice.  My zealotry doesn’t extend that far . . . yet.  After a good chilling the meat went through the grinder and then was covered up and put into the fridge for an overnight infusion of meat and spices.

The next afternoon, once I got Zane down for a nap, it was time to fire up the smoker and stuff some sausage.  Charcoal lumps were loaded and a small bit ignited by an electric coil.  A few big chunks of pecan wood had been soaking in water overnight and would be added just before the meat was put on.  The grinder was screwed onto a plank of wood and that wood then C-clamped onto the kitchen table (rustic setup!), everything cleaned and made ready.  Hog casings had been soaking in water for the last hour and got a final rinse before being eased over the stuffing horn.  Then, with my lovely wife assisting, we started the simple yet complex task of squeezing all of the sausage meat into the thin, almost transparent, animal intestine.

The meat broke through the casing a few seconds into the process, about six inches down the casing. We took note, adjusted pressures, and soldiered on until we had exhausted the meat supply, a few feet of stuffed sausage coiled on the catch pan in our wake.  To fix the break we pulled out the nearby meat and ran it through the stuffer again.  Then both ends were tied off.  We carefully squeezed and then twisted the sausage into links, perhaps a little overcautious after the earlier break.  Frankly, I was surprised at how well it went.  Earlier sausage had been stuffed into large, fibrous casings that they use for summer sausages, manually filled with a spoon and squeezed into place by hand.  For our first natural casings with a sausage stuffer, it went incredibly smooth and quickly.  Of course, in the short time that it took we managed to make a whole pile of dirty implements and dishes, with bits of meat scattered seemingly everywhere (c’mere dog!).  The extra meat we couldn’t push through the stuffer was turned into a patty and fried.

The grill was at a good temperature, pecan chunks put onto the coals, and the temperature probes all ready.  I eased the sausage onto the grill, placed one temp probe in the center of a link, propped the other to hang in “space” so as to measure the internal stove temperature, and closed the lid for the next couple of hours.  The temperature started low, around 160 F. and slowly made its way to 190, where it stayed for most of the cooking, a steady stream of smoke wafting out the vent.  I loosely subscribe to the mantra from a YouTube bbq video: If you’re lookin’, it ain’t cookin’. About two-thirds of the way through, I opened it up to snap the photo.

And that was pretty much it.  Unlike smoking a pulled pork which can take up to twenty four hours, this was done in a couple.  It smelled and tasted wonderful.  For dinner, we paired it with homemade corn bread, sauerkraut, french fries, and fresh cooked collard greens from the garden.  The sauerkraut was the only thing out of place.  It couldn’t compete with the sausage flavor.  Oddly, the collard greens paired up nicely.

That was our first handmade, casing-stuffed sausage.  It’s a lot of work and cleanup, which is probably why you want to make large batches when you do this.  If you are ever interested in giving this a shot, I highly recommend it.  You can make sausage out of all types of meat (even fish), with the spicing and additional flavors tailored to match what you and your family like. There’s a wide variety of resources on the web, with the page over at Art and Practice of Sausage Making being a good starting point.  I picked up the book Charcuterie: The Craft of Salting, Smoking, and Curing a while back, and it is an easy and interesting read, along with a good source for techniques and recipes.  The equipment isn’t too expensive, but you don’t even need all of it.  You could get fresh ground meat from your local butcher and just as easily make patties instead of links.  There’s no rule that you have to stuff sausage, although it does lend a certain familiar aesthetic.

I’ll probably never find a time machine, but as we sat down for the meal and cut into the first sausage, there was a distinct moment when a familiar smell or texture took me back in time, ever so briefly.

Back to the Land Economy

Which Came First, the Chicken or the McNugget?