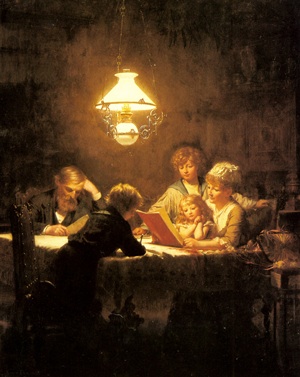 Kearneysville, WV. Recently my wife and I stepped into a new wine shop in a town near where we live. The shop was very small and we were the only patrons. The young lady minding the store was friendly and talkative. We chatted about various wines and about the fact that in our state people tend to favor beverages with names like Bud and Coors over Merlot and Chardonnay. As the conversation drifted away from wine, the young lady, Kate was her name, told us that her fiancé owned the shop but he was occupied that day with his primary job. Her summers were free because she taught at a local elementary school. My wife then mentioned that we homeschool our three boys.

I’m always interested to watch the reaction of people when they learn this fact. Quite often the response is enthusiastic. Once my neighbor sadly shook his head and told me that my wife and I were lucky that we were educated enough to teach our kids at home and keep them out of the local schools. Kate, for her part, smiled and nodded and then she asked the question that I sometimes think has been put to rest but for some reason lingers on as one of the central criticisms of homeschooling: “What about their socialization?”

Kate’s sincere question got me to thinking. What is this thing we call “socialization” and why is there a perception that this is best achieved in the classroom and thwarted by homeschooling? I suppose that socialization means that a child is comfortable with other people and is able to get along with them in a way that portends successful adjustment to the world of adults.

My thoughts turned to my own public school education. I remember a boy named John. In high school he was skinny and gawky and wore a crew cut in a time when long hair was the style. Invariably he was attired in a ratty blue ski jacket and he didn’t take it off inside the building. He didn’t talk much and his nose was constantly running. So was he. He was picked on a lot. He would pull his jacket up around his head and run down the hall somehow avoiding lockers and other students. I think he was trying to avoid getting punched or teased, and perhaps he was simply trying to avoid people in general, for kindness from his peers was not something he knew much about.

My wife also attended public school in a city where students were bussed across town in order to achieve some kind of racial equality. My wife tells of voluntary racial segregation that included hallways where only black students ventured and of another hallway where young ladies were frequently groped.

Of course, anecdotes do not prove that a healthy socialization is not possible in a public school, and there are many success stories that establish the possibility. But the horror stories do seem to blunt the blanket criticisms of homeschooling. The real question that should be asked is not whether a child will be socialized but how the child will be socialized.

It is, to be sure, efficient to divide children into age cohorts and to educate them as a group. Doing otherwise is virtually unimaginable and would require a return to something like the one room school house where children of various ages were educated together. When education is conducted on a large scale such an arrangement would be simply untenable. Yet, it seems almost unavoidable that educating children according to age cohort invariably socializes them to think of themselves as part of a certain group designated by age. That is, at best, a limited preparation for an adult world where one ought to be capable of dealing with people of a variety of ages.

Centuries ago Plato argued that children are essentially mimetic creatures. They will imitate what they see, and what they imitate they will become. If we are not scrupulously attentive, when we educate children in groups of peers, the models they are confronted with are primarily other children. And all too often these cohort groups organize themselves in a hierarchy in which the strong—the physically strong or those with an acerbic wit and often both—are at the top and the weak are marginalized and often tormented. These peer packs create a context where socialization occurs, but at best the results are a mixed bag.

Educating children at home does not guarantee well-adjusted children who become happy and successful adults. But it does offer at the very least more time in which parents can model what a competent adult is. Furthermore, where there is more than one child at home, children naturally learn to interact with people not of their own age cohort.

Two of my most satisfying experiences as a parent have occurred when my oldest son, Seth, has proven himself to be, well, I guess the word is “well-socialized.” One was the first time he sat on the couch flanked by his two younger brothers while he read aloud to them. The second occurred recently when Seth attended a summer sports camp. Also in attendance were some kids who were big and loud and disrespectful of the camp counselors. There was, as there always is, a small boy who was not very athletic, and he was, of course, the object of the bullies. Through the mother of another child, word came to my wife and I that Seth stood up to the bullies. He told them to stop picking on the small boy and then he made an effort to befriend him.

Incidentally, the reason my wife and I were free to linger in a small wine shop on a Saturday afternoon was that our boys were at a birthday party where a rather lively group of children were playing whiffle ball, having a water balloon fight, and swimming in a backyard pool. Most of the children were homeschooled. When we arrived to pick up the boys, all the children were having a great time. I didn’t notice any child who seemed socially ill-at-ease or who wandered by himself playing solitary games with an invisible playmate. And one young man even shook my hand.

How Shall We Train Up A Child?: The View From One...