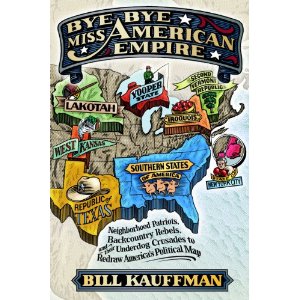 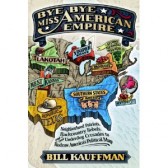 The subtitle of Bill Kauffman’s new book doesn’t reach Rod Dreheresque levels of mouthfulness but it comes close.  The themes implied by the words ought to warm the hearts of Front Porchers.  For good reason.  As always with Bill’s writings, Bye Bye, Miss American Empire: Neighborhood Patriots, Backcountry Rebels, and Their Underdog Crusades to Redraw America’s Political Map is an excellent read.

This is a book about secession.  A little of the past, a lot of the present, a dash of hoped-for future.  If nullification—the topic of Tom Woods’ new book—is a tough sell to the realistic-minded, secession is much more so.  To his credit, Bill admits this: “Yeah, sure, I know: Breaking away is impossible.  Quixotic.  Hopeless.  So was dancing on the Berlin Wall.”  He’s got a point.  No one saw that one coming.  But one near-impossibility becoming reality is not necessarily the harbinger of another occurrence.

Still, the unsustainability of the Union of Soviet Socialist Republics may bode ill for our own imperial union.  As Bill puts it, “You can’t bloat a modest republic into a crapulent empire without sparking one hell of a centrifugal reaction.”  Yes, but don’t underestimate the power of bread and circuses.  The Roman Empire lasted for 500 years.  Perhaps the Kremlin paid too little attention to buying off the poor and entertaining the masses.  In America, we have welfare for everyone—poor, middling, and wealthy.  Financial dependence, and its attendant co-optation, is an equal opportunity federal project.  Hollywood and Madison Avenue numb what can’t be bought.

So I don’t know about the prospects of secession.  When decentralists begin to fill arenas and stadiums instead of hotel conference rooms and public library meeting rooms, then we will know that something major is afoot.  One of the things I like about Bill Kauffman is his indefatigability in the face of stiff odds.  He exudes a cheery optimism in regard to lost causes—which seem to be most of his causes.  He, veteran of the Pat Buchanan and Ralph Nader campaigns.  The lover of small towns, obscure statesmen, and intellectual railway stations long abandoned by the mighty train of Progress.

From the perspective of political science and history, I am interested in the subject of secession, especially as related to the CSA and to the USA’s imperial acquisitions three decades later.  As a Midwestern transplant to the Heart of Dixie, I find Bill’s chapter on the League of the South particularly fascinating.

I want to praise Bill as a writer.  He’s a master stylist.  He brings encyclopedic knowledge to each of his books.  The breadth is often astonishing.  It’s not just the unfamiliar, presumably antiquarian, words.  (“This was once an active member of the English language?!”)  It’s the pop culture allusions, the arcane biographical details, the rich political history.  Coupled with an understanding of context.  How things fit together.  You also get a foundation of wisdom.  The eternal and the temporal matters that really matter.  Love.  Justice.  Peace.  Place.  Liberty.  Family. Community.

It’s all wrapped up in a style that is fluid.  Never labored.  You don’t sense a thesaurus at work for the sake of being clever.  There’s wit.  There’s a little vulgarity in the service of righteous indignation.  There’s good humor even when dealing with enemies.  Individuals who come in for strong, well-deserved, excoriation are not dehumanized.  You don’t sense hatred or bitterness.  He has a bold yet good-natured stance, even weaving his own life experiences into the narrative.

It’s refreshing.  Some of my favorite subjects, examined from a good perspective, with panache.  I could see someone enjoying a Kauffman book even if he or she has little initial interest in the subject.  It pulls the reader in.  I suppose some may find his frequent asides and parenthetical detours annoying, but I don’t.  It’s the way the human mind, and human heart, tend to work.  In the age of hyperlinks, such moving from one subject to a related one is a familiar activity.  As a political essayist, Bill Kauffman ranks right up there with Dwight Macdonald and Gore Vidal.  I can see why Vidal is an admirer.

The subtitle of an earlier Kauffman book—Look Homeward, America: In Search of Reactionary Radicals and Front-Porch Anarchists—inspired the name of our website, albeit in diluted form.  Over at the left-wing CounterPunch site, Christopher Ketcham has recently given us a fine overview of efforts by liberal secessionists in Vermont.  He even mentions the publisher of Bill’s book: Chelsea Green Publishing of White River Junction, Vermont.  Of course, it takes more than a relative handful of thoughtful activists on the Right and the Left to make a majority, or even a sizeable enough minority to effect political change . . . especially of a dramatic nature.  That’s the challenge for those of us who believe in grassroots democracy, political decentralization, and community-based economics.

Bill has been called (to his eternal delight) “the Sage of Batavia,” but really that’s too formal a title for a man who likes to be photographed holding a can of Genessee.  I prefer to think of him as a much-needed dumpster-diver of American history.  He is particularly willing to dig for those forgotten or thrown-away arguers for political liberty and limits, to his great credit.

As the book’s reason for being is to present the arguments for secession and dissolution, we hear from those who didn’t want to add states beyond the lower 48, who resisted the fiscally advantageous but politically impotent no-man’s-land of territorial status for Puerto Rico, and who grieved at the calls for secession in the 1840s and 50s but preferred divorce to invasion and pillage.  Like a sand castle in the midst of the Bay of Fundy, their causes were flattened by the strong tide of “progess,” business opportunity and empire.  But if the champions of these lost causes left no victories, they left a record, and Bill has done his best to remind us of it.

Bill profiles recent secessionist movements as well, small and oft-berated as they are.  Jeff raises the question—and he will not be alone—that given the unlikelihood of any secession movement getting anywhere even in the polls, even in Vermont, why write about it?  Why would Bill spend his limited time researching the topic, or why should we read about it?  One must read to see; the book makes a strong case for the necessity of its subject.  It is important to remember how undemocratically Hawaii and Alaska entered the union.  Or how recently it was a jailable offense to fly the Puerto Rican flag in Puerto Rico.  Or how many of the political arguments used against the South in the early and middle 19th century have justified expansionism and empire in the century and a half since.

While Bill is a rabid fissionist (he’d take two New Yorks in a heartbeat) he is not a willing secessionist, other than being happy to release the noncontinguous states 49 and 50.  Like his relatives who fought on the winning side of the Civil War, Bill is a Unionist at heart, and forgetting that no state has a pristine record on racial matters, he cannot mention a Southern state or Southern man without reminding the reader of what is unforgiveable in our past.  Every single time.

Still, Bill quotes the best arguers for Southern secession living and dead, and many of his best quotes on the right functions of statehood and the risks of empire come from Southerners.  And that should be no surprise, because nullification and secession are the necessary outs in our political system for any state that finds the federal government all too willing to meddle and control what that state deems to be its own essential business and welfare.  The fact that such arguments have been used to defend policies some of us greatly dislike does not make the arguments less justifiable.  Without nullificiation and secession, federalism has no teeth.  I’ve argued that before, and I’m glad to read a book that gives me occasion to argue it again.

Finally, I have to mention Bill’s love for a ten-dollar word.  He didn’t ask me for a quote for his dustjacket, but if he had, here’s what I would have written:

“Out of the Cimmerian political fog in which we live, rising like an eidolon rived from the center of the gelid dark, this paen to the fissiparous sounds a tocsin of old, and contumaciously tossing aside the cerecloth of our not-dead-but-sleeping Republic, it disdains the mingy orts and crusts tossed to quiet us by the yeggs who offer us nothing but a Connecticut nutmeg in exchange for the auric freedoms our forefathers bequeathed us in this our virid and pleasant land–our United States (takes a plural).”

I value a writer who makes me read with a dictionary.  Godspeed the man with a memory.

In reading Kate’s fine contribution, I see that I may have left the impression that secession is not worth writing about because it’s unlikely.  That wasn’t my intent.  To quote Jefferson Smith, in one of my favorite movies, lost causes are “the only causes worth fighting for.”  Theologically, we know this isn’t completely true because the Kingdom of God will eventually triumph once and for all.  But, in the present age, noble causes are often on the losing side.  There’s no waste in writing, thinking, and acting on good principle, in fair weather or foul.  Bill Kauffman knows this, and this is why he likes underdog crusades.