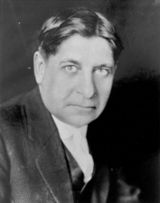 It has been observed of many of the early twentieth century progressives that it was difficult to say whether they were on the far left or the far right or both simultaneously, but you were safe to identify them as radical, whichever political directions the wind took at the moment. They certainly weren’t the sort of consistent free marketers that would have satisfied the von Mises criteria, but they were often great decentralizers and opponents of any large scale concentration of power. Such was the case of a largely forgotten, but colorful and articulate United States Senator from Minnesota, Thomas D. Schall.

Schall came from a broken family before broken families were cool, so to speak. In the early 1880s his father took off for what he believed would be sunnier climes in the Missouri boot heal and left his wife of almost twenty years with three children to feed in the small town of Reed City, Michigan. She did, but barely, and young Tom never set foot in a school until he was 12 years old after the family had migrated to the Minnesota-North Dakota border country. He made rapid progress as a young scholar, but perhaps more as a young pugilist, baseball player, and competitive orator. He worked his way through Hamline College in St. Paul by organizing his own laundry service, and always had an eye for profitable exchange of goods and services.

After two years at Hamline he transferred to the University of Minnesota, graduated without any particular distinction, and then went to the Minneapolic College of Law, one of many night schools for aspiring members of the bar. He went into personal injury law, and it was commented that he had a stable of reliable friends who did nothing but witness accidents of various types while in progress. He was on his way to a successful and financially rewarding career and then in 1909 catastrophe struck.

He was arguing a case in Fargo, and went out for lunch. He stepped into a cigar store, purchased a stogie and attempted to light it with a new electric cigar lighter. Although he didn’t notice at the time, he plugged the 110 volt lighter into a 220 volt outlet. He was immediately shocked and suffered from double vision . Within three months he had completely lost his vision and within the year had gone through the money that he had saved during the seven years of his legal practice. With the support of his wife of only a year he then decided to plunge back into the practice of law. This he did with notable success and then decided to take a whirl at politics.

Rather than presenting himself as disabled, he portrayed himself as receiving those gifts reserved for the blind.

“From 27 to 30 I practiced law with marked success. From 30 to 37 I have been in total darkness. I have demonstrated that I can still take care of the interests of my clients against the best legal minds of this or any other state. The heart’s the source of power. Men are as great as their hearts are great. Not in reveling palaces nor pillared halls are the deepest emotions felt, grandest conceptions born, or most vital truths discovered. But from Sinai’s slopes from the felon cell at Bedford, from the chamber of blindness in London have come the inspirations that have blessed mankind.”

Not bad for someone who couldn’t read at the age of 12. Schall’s politics were not altogether consistent, to say the least. He was an admirer and friend of Congressman Charles A. Lindbergh , father of the aviator, from nearby Little Falls, Minnesota. Minnesota had a sizeable Non-Partisan League presence, which emphasized the need for the small farmer and entrepreneur to organize for their own, not for corporate, interests. Some went left into the Farmer-Labor Party and others, like Schall, seemed to distrust government as much as any other large power.

The new blind congressman called himself a Lincoln-Roosevelt Republican, and had enthusiastically supported the Roughrider in 1912. He never seemed to be a roughrider however. He represented a far more cautious, even noninterventionist approach to foreign policy. He cast, as a Progressive, the deciding vote, for Champ Clarke, the Missouri critic of Wilson’s foreign policy, as Speaker of the House. The rationale was that during time of war a president should have his own party in control of Congress. A debatable premise, but the one Schall used.

During the war Schall spent much of his time attacking Gen. Pershing, who he associated with virtually all the wealthy elites. Of Pershing he said, The only men I have heard applaud him are his puppets, who owe their present positions to him not to efficiency or bravery in action, but to serve in his behalf, and who would personally profit by his elevation. Any soldier who ranked him or showed ability, or a dangerous ability to think for himself was eliminated by his imperial order, that no one might divert a beam of light from the great man. With the aid of the Creel Bureau Pershing built up a colossal advertising and propaganda machine. Schall then accused these two organization of creating a …mawkish, un-American sycophancy, folstered by mediocre men, which has lickspittled and moved until it is a wonder that members of Congress have been deceived.

In 1924, after ten years in the lower House, Congressman Schall ran for the United States Senate. He was opposed by the establishment Republicans who thought that he was a rough-cut radical and didn’t represent the image that they thought should attach to Minnesota republicanism. Schall was unimpressed and went on to beat their chosen candidate, a much respected but older jurist whose pastel approach could hardly compete with the sightless sideshow that Tom Schall was providing Minnesota. Schall then went on in the general election to defeat Magnus Johnson, a popular Swedish born Minnesota political figure. At least a part of the campaign centered around Schall’s accusation that Johnson would not effectively fight American membership in the League of Nations and the World Court. Johnson, in his broken and none too gramatical English usually bungled his responses, but Schall was unforgiving and unabashed. In his stump speeches he would repeat the accusation that it was likely that Johnson was not above having sold his vote to international interests. A few days before I left Washington a gentleman came into my office with a highly perfumed cigar. He put his hand on my shoulder and said, “Tom, if you go back to Minnesota and work for the World Court, I have $25,000 for you.” Did Magnus see the man with the highly perfumed cigar and the $25,000? Johnson would respond by declaring his opposition to the League of Nations but approval of the World Court because he “believed in peace”. His defense was never as vivid or captivating as was Schall’s depiction of the gentleman with the “highly perfumed cigar”.

Come the presidency of Franklin Roosevelt and Schall went into high gear with his invective. And not just Franklin but Eleanore and Fallah as well. The denunciation of the various parts of the New Deal as a kind of American bolshevism was unremitting. By 1935 he said on the Senate floor that FDR was “…the first communist president of the United States and was acclaimed in the communists Russian newspapers”. He became a more generalized critic of the Democratic Party, and for a proud backer of Theodore Roosevelt even became more overtly critical of American participation in World War I, blaming it for laying the groundwork for the economic troubles that hit in 1928. He saw the Reconstruction Finance Corporation as being an instrument by which the government took control of what had previously been private corporations and then on the occasion of a “…planned or artificial emergency , under which Congress can be scared or stampeded into making FDR a dictator”.

Senator Schall was planning an aggressive campaign for reelection in 1936. His most likely opponent would be the popular and charismatic Minnesota governor, Floyd B. Olson. Olson was a self-admitted radical and an outspoken FDR supporter. The lines had been drawn and the strategies had been fixed for the coming election season. Roosevelt had agreed to come to Minnesota to campaign for Olson. No surprise there. But Tom Schall had arranged to have Democratic Senator Huey P. Long of Louisiana come and campaign for him and against both Olson and FDR. The campaign would have entertained the people of the Upper Midwest for the full campaign but fate intervened. In September of 1935 Huey Long was cut down with an assassin’s bullet in the Louisiana capitol building.

Just a little over three months later Tom Schall was killed by a speeding motorist in Maryland with a history of reckless driving, and in the spring of 1936 Floyd B. Olson was diagnosed with the stomach cancer that took his life in August. Of the four principals of the promised campaign, only one survived until the election, FDR. Tom Schall was in many ways an inconsistent figure, not without his own ethical lapses, but he transformed from a fairly innocent Lincoln-Roosevelt Republican into a non-interventionist in foreign policy and a defender of smaller and less intrusive government on the domestic side. He believed in freedom for the individual and increasingly saw it endangered by the forces of concentrated power, whether by huge corporations, international banking cabals, or statist politicians. This blind senator from Minnesota deserves not to be forgotten by those who today share his passions.

Perils of the Stationary State