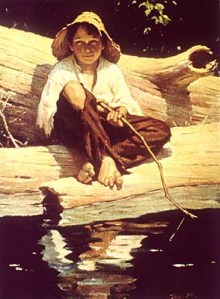 I think it is unquestionable that of the two Homeric epics, it is the Iliad which is the finer work of artistry, a judgment shared by the author of On the Sublime, who likened the Odyssey to a setting sun, “whose grandeur remains without its intensity.”  That said, it is probably the Odyssey which captures the ethical ideals of the ancient Greeks more unambiguously, particularly in the way it emphasizes the necessarily communal basis of any such ideals. The work is essentially one long hymn to the centrality of home, understood as both place – “Ithaca, crown of islands” – and, more significantly, the network of one’s relationships of mutual dependency, the sphere of one’s duties, and therefore the foundation of one’s moral identity.  One cannot begin to enter into the imaginative world of the Odyssey until one grasps the extent to which love of home motivates Odysseus and his son Telemachus; none of their major actions in the story is the least bit intelligible except in the light of such motivation.  It is of the first importance to the proper interpretation of the epic, that when we read of the flight from Ogygia, or the journey to the underworld, or the passage by Scylla and Charybdis, we are witnessing the adventures of a man intent on reaching home, who willingly encounters those perils precisely because they are unavoidable trials on the path to his home.

When we first encounter Odysseus in the story, we find him peering longingly across the sea, weeping with nostalgia for the kingdom from which he has been absent some twenty years.  He is detained in Ogygia against his will, by the beautiful and ageless goddess Calypso.  Homer represents her island domain as a kind of demi-paradise, adorned with every natural luxury the mind could conjure (including the relentless erotic attentions of the goddess herself), and so astonishing in its outward beauty that the messenger god Hermes, alighting there to deliver an order of Zeus, is dumbstruck in wonder, though he himself resides in the precincts of immortal Olympus.  This depiction of unlimited natural abundance is presented to us in direct contrast to an earlier description of the island of Ithaca, for when Menelaus offers Telemachus a gift of horses to take with him upon his departure from Sparta, the young prince replies that there is no room for horses to graze in his homeland, on account of its rocky barrenness.  Yet it is to this place – which is, objectively speaking, vastly inferior to the place of his present dwelling – that Odysseus desires, with all his heart, to return.

That return is – as Odysseus knows it must be – fraught with every sort of suffering and misery which can afflict a man.  The catastrophic condition of the hero is best illustrated by the fact that he is repeatedly required to declare himself a suppliant – to the Cyclops Polyphemus, to the river-god on the coast of Phaeacia, and to King Alcinuous and Queen Arete.  To be a suppliant means to reveal oneself as utterly without power, and it is the contrast between this helplessness and his former (and future) regal authority that impresses upon us, the readers, the depths of the man’s wretchedness.  But the cause of that wretchedness is simply his absence from his home. There is no kingship without a kingdom; there is no identity outside of one’s communal relations.  So when Odysseus tells Polyphemus that his name is Nobody, he is devising another masterful ruse, to be sure, but he is also attesting to the fact that, at this point in the story, exiled from the soil in which were planted the roots of his own self-understanding, he has become divorced from his true self, – in the words of Keats’ Saturn, he is “gone away from his own bosom.”

We can say with confidence, then, that for Homer and his Greek audience, Odysseus’ condition in the course of his journey home is represented as the most miserable state in which a man can find himself.  The wanderer, the exile, the suppliant – these are the words one uses when one wishes to identify the very nadir of human fortunes.  And it is precisely for this reason that a very fruitful contrast may be made between the great epic poem and that standard of the American tradition, The Adventures of Huckleberry Finn, because in this latter work, the very same state of wandering and homelessness is depicted, in rather unambiguous fashion, as the very height of human happiness, and the necessary precondition for moral flourishing.

The river journey of Huck and Jim is, like the journey of Odysseus, beset with danger and hardship, but it is danger and hardship that is encountered in a flight away from home – away from Huck’s abusive father and from Jim’s enslavement.  The novel ends with Huck stating his intention of “lighting out for the Territory” to avoid being civilized by Aunt Sally, so that even as the story concludes, he remains effectively without a home.  The raft, which was for Odysseus the vehicle of his torment by the offended god Poseidon, becomes for Twain’s two heroes the scene of salvation, the means of liberation from their oppressive past:  “We said there warn’t no home like a raft, after all.  Other places do seem so cramped up and smothery, but a raft don’t.  You feel mighty free and easy and comfortable on a raft.”  It is when they leave their raft behind, and wander among the people who live along the Mississippi River, that their troubles begin, whether at the homestead of the Grangerfords, or the Phelps’ farm.  According to Twain’s vision, it is the communal world of men that is the arena of agony, the secluded exile of the river-journey that is the scene of repose.

Most significantly, it is from the time which he shares alone with Jim that Huck comes to grasp the common humanity of this man, whom all the rest of the world perceives as mere property.  None of the adults in Huck’s world – from his obscene father, to the conniving King and the Duke, to the apparently learned but truly obtuse doctor who treats the gun-shot wound of Tom Sawyer – can see beyond Jim’s race to recognize the person.  Huck himself fails to do this consistently until near the book’s conclusion.  But when he is finally able to gain this insight, it is as a direct consequence of attending to his own instinctive decency, and, most crucially, by divesting himself of the prejudices of the community in which he was raised.  The prerequisite for Huck’s moral growth is a departure – intellectually, as well as physically – from his home, and everything that defines it.

So we can fairly say that the journey of Huck and Jim is a journey of liberation, but what they are liberating themselves from is their community.  Their good fortune lies in the fact that they have successfully affected that severance by the story’s end.  In the same way that the Odyssey effectively serves as a celebration of the well-ordered community, we can say that Twain’s novel serves as an encomium to the moral primacy of the individual.  And of course, it is precisely because this uncompromisingly individualistic ethos lies at the heart of the book that it has attained its status as the great American story, as seminal to our culture and thought as the Odyssey was to the culture and thought of the ancient Greeks.  But it is this very fact which should disturb us.

Consider Alasdair MacIntyre’s history of the Aristotlean-Thomistic tradition of moral inquiry.  What MacIntyre emphasizes – first in After Virtue, and later, with greater elucidation, in Whose Justice? Which Rationality? –  is the way the Homeric epics inaugurated this particular tradition, by bequeathing to subsequent thinkers a vocabulary and conceptual schemata of ethical and political thought.  Foundational concepts like dikae and time are employed for the first time by Homer, and receive their significance from the way they shape the actions of his heroes.  Later authors, as various as Thucydides and Aristotle, will reexamine and reinterpret these concepts in highly disparate ways, but their starting point will always be the work of Homer, and this indicates that his poetry served subsequent thinkers as, among other things, a guide to political reasoning, understood broadly as the art of constructing a well-ordered community.

But quite clearly, Twain’s novel could never serve us in the same manner.  On whatever other grounds we may value his book, it should appear quite obvious that it bequeaths to us no such conceptual legacy, and possesses no such political relevance.  It could never initiate any serious tradition of inquiry regarding the nature of justice or honor in a well-ordered community, because its underlying theme is a hostility to community as such, and a conviction in the intrinsically malign influence of man’s communal life.  Political reasoning can begin from no such premises.  So we must say that when we engage in serious political reasoning, we will have no cause to refer to Twain’s book.  And what is true of The Adventures of Huckleberry Finn is equally true of Walden, of The Great Gatsby, and a host of other books which we are accustomed to regarding as classics of our national literature.  The fact is that we Americans inherit a literary tradition which has very little wisdom to impart to us concerning the right ordering of our communities.  What Homer was to the Greeks, what Dante was to the Italians, what Shakespeare was to the English – the well-spring of civilized values and the foundation of authentic moral inquiry – no author has ever been to us.  And I think our politics has suffered as a consequence.

It is highly significant that our national literary hero is an untutored adolescent, who believes that an individual can flourish in the absence of a home and its significant relationships.  We have, until this day, indulged in our individualistic reveries, imagining that we are always free to “light out for the Territory” and leave the ills of communal life behind us.  What surprise can there be, then, that we have a political discourse which is often misguided and ineffectual?  What we need is a new national story, one that captures in a manner unique to our history and location, the abiding truth that what is most desirable to human creatures is a home, and that all of our journeys remain incomplete until they have led us to this destination.