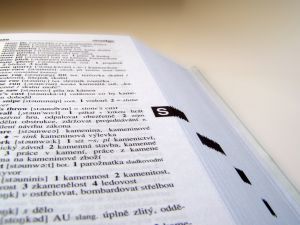 Grove City, PA . The rule of three. Do you know of this? It might be a movie, a book, a band, a whiskey-label but if on three random occasions it gets repeated one is obliged to go see or read it, give it a listen or a swallow. Once, you see, and it does not even register. Twice is the sphere of coincidence. But three times means something. Karma. Providence. Kismet. Whatever. Well, two things I have noticed recently have come up twice, but before either of them comes up a third time, here they are. (Wait, if I mention them, does that make a third?)

First and least interesting, the matter of “gossip.” A good hour between urban centers in either direction, where I live is a media broadcast no man’s land. Scanning the car radio, I hit upon Glenn Beck. I don’t have cable, so I’ve never seen or heard him. Really. Heard of him, yes. Apparently, he is a phenomenon of sorts. So I’m curious. And then confused as Beck prattled on about the etymology of “gossip” and how King George sent spies into our land telling them to “go sip” in the pubs with the Colonial rebels and thereby gather intelligence. That’s how “gossip” came to mean what it does according to Glenn Beck. I did not find such ignorance remarkable.

Then I get an email forwarded to me. I know what you’re thinking, but this was from a trusted source always dependably judicious. It was a list of words, phrases, and idioms with their “surprise” etymologies. Lo, and behold there was “gossip” and the same bogus derivation from “go sip.” The only thing missing was the espionage on our beloved Founding Fathers (now at least I could appreciate Beck’s contribution). Now this coincidence was remarkable.

But anyone who has studied any foreign language knows that words usually do not come to mean what they mean in this way. That is, words that mean one thing, such as “go” and “sip,” do not combine to form a word, in this case “gossip,” that means something else entirely. Usually there is some derivation from Latin or Greek or Shakespeare or something. Maybe you can even look it up. Because I am highly trained professional, here’s the short cut to the full skinny—the Oxford English Dictionary. Once virtually inaccessible, the OED is now accessible to all “free” and online 24/7 at www.oed.com. There one would learn that gossip has nothing to do with sipping ale in Colonial taverns nor with Latin, Greek, or even Shakespeare. Well, there is a little Shakespeare. “Gossip” derives squarely from the Old English for god-parent, one’s sponsor at baptism, a family intimate. And gossip about their god-child, naturally, becomes a primary occupation.

Let us now dive into the second and more interesting coincidence. This from today’s sports page: “…that stretched the lead to 46-40 after Sampson dived for a loose ball.” Dived. The English language, of course, even from its earliest Anglo-Saxon roots has always used what linguists call dental endings,  –t, or –ed, to convey past tense for certain kinds of  verbs. But strictly in terms of the history of English, the verb “to dive” is not of such a kind. So what happened to “dove” as a past tense verb? Nothing apparently: “when the shooting started Saturday, he dove to the ground…” Coincidentally, both quotations appear in the very same newspaper, but we cannot blame sloppy editorial practice or the lame prose stylists of the sports page who went with “dived.”

We cannot blame them because neither is at fault. In fact the respective writers as well as their section’s editors could have grammar-checked both forms. Or at least let their computers check for them. Both “dove” and “dived” are considered grammatically acceptable. Try it right now with your grammar-check brought to you by the powers that be. See.

Now we must delve into the abyss of genuine grammatical ambiguity, which is a sort of Rorschach test for some. To some such an abyss does not exist; either it is “dove” or “dived,” and the other must be wrong. This is the fundamentalist mind. To others, who acknowledge the legitimacy of both forms, some careful distinction must govern their respective use. If such a rule does not exist this sophomoric sort of person will make one up – for instance, the supposed proper uses of “further” and “farther.” This pedantic type borders on the obsessive/compulsive and tends toward becoming 8th grade English teachers, librarians, or NFL assistant coaches. Or French (recall even centuries before communism the frogmen actually established a Committee to decide such matters). The relativist mind, on the other hand, embraces the ambiguity eagerly. In fact, they might even legislate the equitable alternation of “dove” and “dived” for justice’s sake. Looks like their policy is already in effect at the newspaper I quoted from above.

We should properly fear them all.

To the Front Porch state of mind, however, “dived” v. “dove” suggests at least two things (and I heartily welcome more): 1) ambiguity is a kind of liberty, and liberty always has her limits, but those limits and who determines them are deliciously ad hoc, practical, communal, and local; 2) English—mirabile dictu—ain’t French.