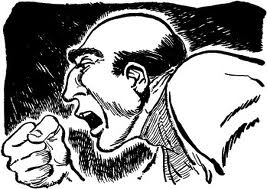 Inflammatory rhetoric must be purged, some say.  Not necessarily a bad idea, provided would-be arbiters of civil discourse begin by questioning the enshrinement of writer Susan Sontag in college rhetoric textbooks.  It would, after all, take a most peculiar notion of civility to endorse Sontag’s 1967 declaration that “[t]he white race is the cancer of human history”.  Somehow, nevertheless, those who object to being labeled “cancer” find that their objections are ignored while they themselves are expected to take seriously speeches by pundits professing hatred of hate speech.  Evidently the only real problem with The Matrix’s misanthropic Agent Smith is that he fails to confine his animosity to those of European descent.  Should he clean up his act, perhaps he could land himself a job with some nice office of diversity affairs somewhere:  And we… are the cure.

Yet fairness demands credit where credit is due:  Sontag did at least own up to Western liberalism’s collaboration with Communist atrocities.  As early as 1982 she conceded that many “people on the left” — including Sontag herself — had “willingly or unwillingly told a lot of lies” during the Cold War:

Imagine, if you will, someone who read only the Reader’s Digest between 1950 and 1970, and someone in the same period who read only The Nation or The New Statesman. Which reader would have been better informed about the realities of Communism?  The answer, I think, should give us pause. Can it be that our [conservative] enemies were right?

Critics of Sontag may of course demand where, after having admitted this, she still had the nerve to continue pontificating about world affairs for the remaining two decades of her life.  But at least she was honest enough to confess her part in a great wrong, which is more than can be said for others.

To put that wrong in context requires going back to the USSR’s origins and looking at another activist who was at least as intellectually rigorous as Sontag — Vladimir Ilyich Lenin.  Candidly disdainful of his country’s intelligentsia, Lenin scorned Russian intellectuals’ claim to be “the brains of the nation”:  “In fact they are not its brains but its shit.”  Likewise blunt regarding the prosperous peasant-farmers known as kulaks, Lenin saw such peasants’ resistance to land collectivization interfering with his effort to control agriculture.  Hence in one memo he ordered the hanging of over 100 of them “to be accomplished in such a way, that people for hundreds of miles around will see, tremble, know and scream out:  let’s choke and strangle those bloodsucking kulaks.”

Thus the conventional claim that the revolution was humane until Stalin betrayed it proves difficult to support.  As a potential threat to Russian Marxism the Orthodox Church was specifically singled out for a beating, with 1,000 priests and 28 bishops executed in the first five years following Bolshevik ascendancy.  A shrewd political operator, Lenin deftly turned famine caused by Bolshevik collectivization policies into a political weapon against religion.  In a letter to the Politburo he insisted that “[w]e must pursue the removal of church property by any means necessary in order to secure for ourselves a fund of several hundred million gold rubles,” and observed that mass-starvation provided a perfect pretext for seizing consecrated vessels and religious art:

Now and only now, when people are being eaten in famine-stricken areas, and hundreds, if not thousands, of corpses lie on the roads, we can (and therefore must) pursue the removal of church property with the most frenzied and ruthless energy and not hesitate to put down the least opposition.

Needless to say, the wealth stripped from the churches did not transform Russia into a paradise of well-fed happy workers.  What Lenin’s regime did achieve was the birth of the vast GULAG network, beginning with the establishment of a labor camp at the Solovetsky Islands in 1923.  It was at Solovki where new techniques were devised and perfected for the management of prisoners:  Men were fed based on their productivity, while inmates who fell afoul of the guards were liable to be stripped and then bound to a tree, thereby offered up like sacrifices to insatiable clouds of mosquitoes infesting the region.

Other facilities were plain death-camps.  At Butovo during the Great Terror a night-shift tasked with the liquidation of political prisoners worked from dusk till dawn.  Prisoners were shipped in by truck, their papers were checked, and then they were escorted one by one out to a pit where each received a single bullet through the back of the neck. In the morning the pit was covered over by bulldozers while the executioners endeavored to relax with vodka.  From August 1937 to October 1938 the Butovo facility eliminated over twenty thousand persons — mostly peasants, priests, White Army officers, and bourgeois.

Although Stalin’s era marked the worst of these sorts of excesses, Soviet oppression no more ended with Stalin than it began with him.  In 1972 Ukrainian poet and dissident Vasyl Stus was arrested and imprisoned; he was later released, only to be re-imprisoned in 1979.  Due to the combined stress of a hunger strike and solitary confinement his health fatally failed at last in 1985, shortly after he had been nominated for the 1985 Nobel Prize in Literature.  Defiant to the end, Stus makes for an intriguing contrast with Pablo Neruda, 1971 recipient of the aforementioned Swedish honor.  Though his sensual, romantic poetry in praise of Woman has caused many a heart-flutter in the language arts classrooms of WASPy Catholic girls’ schools, Neruda’s 1953 ode to the recently-deceased Stalin rarely receives the attention it deserves:

To be men! That is the Stalinist law! . . .
We must learn from Stalin
his sincere intensity
his concrete clarity. . . .
Stalin is the noon,
the maturity of man and the peoples.
Stalinists, Let us bear this title with pride. . . .
Stalinist workers, clerks, women take care of this day!
The light has not vanished.
The fire has not disappeared,
There is only the growth of
Light, bread, fire and hope
In Stalin’s invincible time!

If his glowing endorsement of Stalin has in any way hurt Neruda’s reputation on the Left, the damage is utterly indiscernable.  In an enthusiastic tribute printed in the July 2, 2004 issue of The Chronicle of Higher Education, Illan Stavans of Amherst College briefly notes Neruda’s embarrassing devotion to Stalin, yet insists that such details should hardly dampen our admiration for the great “torchbearer”:

The beatniks made him a role model. On campus in the 1970s he was a favorite. If the neoliberalism of the 1980s seemed to turn him into an anachronism, Michael Radford’s 1994 film Il Postino, based on a novella that included Neruda, by his compatriot Antonio Skarmeta, renewed his appeal.  The festivities surrounding his centennial are adding to the enthusiasm. Launched last year in the United States at a poetry reading and photographic exhibit in New York, the celebration has continued with events at numerous universities.

“Students everywhere embrace Neruda because he sought fairness and didn’t shy away from resistance,” concludes Stavans, musing: “How would [Neruda] have reacted to the current threat to civil liberties in our country? To the contradictions of the war on terror?”

In an age saturated with false dichotomies, it bears repeating that one need admire neither the Bush administration nor its ill-conceived “war on terror” to ask questions quite different from those raised by Professor Stavans.  For instance — how morally vacuous must a society be for Stalin’s eulogist to get invoked as an authority on civil liberties?  For its educators to call upon the alleged wisdom which had adored one of the world’s most murderous tyrants?

Not to be outdone by Neruda, W.E.B. Dubois expressed his love for the Soviet ruler in prose:

Joseph Stalin was a great man; few other men of the 20th century approach his stature. He was simple, calm and courageous. He seldom lost his poise; pondered his problems slowly, made his decisions clearly and firmly; never yielded to ostentation nor coyly refrained from holding his rightful place with dignity… He was attacked and slandered as few men of power have been; yet he seldom lost his courtesy and balance…Such was the man who lies dead, still the butt of noisy jackals and of the ill-bred men of some parts of the distempered West.

Those reluctant to recognize the full appalling nature of such statements offer excuses that an honest mind will see only as a bad joke.  His indignation over civil rights violations drove Dubois to Stalinism; his passionate crusade against racially-motivated injustice blinded him to the torture, enslavement, and murder of countless Slavs.  In reality such Pyrrhic defenses call into question the claim that Dubois stood for anything more magnanimous than an ethnocentric realpolitik.

The canine motif employed in Stalin’s obituary may also be found in existentialist Jean-Paul Sartre’s assertion that “[a]n anti-Communist is a dog.”  As insults go, Sartre’s may not be particularly shocking; some anti-Communists might even perceive it a compliment, arguing that a good dog is more estimable than a French leftist.  But with equal clarity Sartre explained his thoughts regarding enemies of revolution and what to do with them:

A revolutionary regime must get rid of a certain number of individuals that threaten it and I see no other means for this than death; it is always possible to get out of a prison; the revolutionaries of 1793 probably didn’t kill enough people.

While the current writer is almost certainly the sort of “noisy jackal” who “a revolutionary regime must get rid of”, his intention is not to casually dismiss Dubois’ literary talent nor Sartre’s contributions to philosophy — nor even to dismiss Neruda’s skill as a poet, regardless of how badly sycophancy may have sometimes marred that skill.  What should be dismissed — or rather mercilessly ridiculed at every opportunity — is the progressive’s callow delusion that his slogans sprinkle him with the magical pixie-dust of ethical superiority.  Why do so many continue to act and speak as if history’s atrocities have always been committed in the name of God or Nation, never in the name of Liberation or Equality?  To this day the gravest sin of the Cold War era is made out to be not Sartre’s suggestion that reactionaries be put up against the wall nor even actual Bolshevik implementation of that policy, but rather McCarthy’s attack on Hollywood.  At the typical highbrow cocktail party more scandal would be caused by attributing the Red Scare to Red scariness than by expressing admiration for a ruthless killer like Lenin.

It is unsurprising when a society that makes such absurdity the norm turns out to be morally bankrupt and shot through with nihilism.  It is unsurprising that youths who grow up watching the Western ideal of justice shamelessly exploited and perverted should then mistake holy justice itself for a superstition, and adopt the heresy that life is a void to be filled through power.  It is unsurprising, though no less unfortunate.

The Moral Implications of Dictionaries