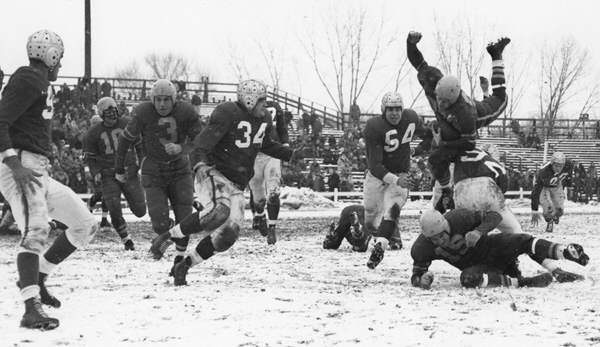 As I watch the confetti fall on the newly crowned 13-time football World Champion Green Bay Packers, my mind drifts back to what was the beginning of my football season: June 12th. On that late spring day I returned to the Fatherland – Green Bay, Wisconsin – with my father following my brother’s wedding on the Carolina Coast. We came for a few days of family history, fried cheese curds, and the Packers. The short cab ride from the Austin Straubel International Airport to the hotel allowed enough time for me to get into an argument with the cab driver about Brett Favre’s legacy. Remember, this was June, but it’s always football season in Green Bay.

A couple days after landing we joined several hundred Packer faithful, gazing at the last team workout before they departed for summer training camp at St. Norbert College in De Pere.  While expectations were great for the “Green & Gold” when the season started, it would still have been a stretch to acknowledge, as we saw these young men running plays in shorts and shirts, that we were witnessing the formation of a world championship team. Still, this is “Titletown, U.S.A.”

The first American Pete Peterson arrived in Green Bay the late summer of 1853 from Hardinger, Norway.  Learning the sea in his native land, he worked on various schooners sailing throughout the Great Lakes delivering wood, coal, and other staples. Within a decade Peter had begun building schooners as well as sailing them, including the ship, “City of Green Bay”, which launched in 1872. His profile is noted in the 1899 classic, History of the Great Lakes: “Something of the old Viking blood must flow in the veins of this hardy sun of Norway, who is known all around the Great Lakes as an able and fearless seaman.”

Marrying the Dutch immigrant, Joanna Van Denboomen in the year Lincoln was elected, the Peterson’s would raise 10 kids in Green Bay – the second generation of four to live in the small Wisconsin city. My dad and aunt were the last two Peterson’s born in Green Bay, and my grandmother was the last to live there just prior to the turn of this century.  As a child, my father remembers visits to his house by family friends, Curly and Marguerite Lambeau, for occasional drinks and conversation.

It began in 1919, when Lambeau, a recent graduate and star athlete at Green Bay East High School, was home from Notre Dame where he had played for the great Knute Rockne. While there was football in America, there was no professional game to speak of – tens of thousands would throng to see college battles, while hundreds or dozens would attend “professional” contests where players would split ticket fees.

A hometown hero, Lambeau ran into George W. Calhoun, the sports editor for the Green Bay Press-Gazette. Calhoun spoke with Lambeau about starting a football club there in town. Lambeau would play and coach; Calhoun would manage the team and help find players. Scrambling for financial support, Curly asked his boss at the Indian Packing Company if he would sponsor the team in return for naming rights. The company wrote the check for $500.00, and the Green Bay Indians football team was born.

The team became an almost immediate success…on the gridiron. Trouncing opponents from Ishpeming, Beloit, and Menomonie, the Indians racked up an impressive record, but when the Indian Packing Company fell on hard times, the future of the franchise was in doubt. In 1921 the Acme Packing Company bought Indian, and when the charming Lambeau asked company officials for their financial backing to buy a franchise in the budding American Pro Football League, they couldn’t say no. The Indians became the Packers.

Continued dominance on the football field still failed to yield financial stability, so in 1923 an idea was struck that forever changed the relationship between the city by the bay and its football team: Curly decided to “take the team public,” registering the team as a non-profit corporation. During a standing room only meeting at the Green Bay Elks’ Club, 400 residents bought non-interest bearing “shares” in the Packers valued at $5.00 a piece. Purchasing five shares offered a season ticket pass.

A non-salaried 15-man Board was established, and an agreement was struck that all profits not returned to football operations would go to Green Bay’s Sullivan-Wallen Post of the American Legion (a rule that remained until fairly recently). One thousand shares were sold that day, and while teams like the Dayton Triangles, Muncie Flyers, and Rochester Jeffersons soon landed on the muddy heap of football history, the Green Bay Packers marched on.

During three other times in team history, the organization went back to fans to raise more funds through share sales – the most recent being 1997-1998.  Today, there are over 110,000 shareholders. Their annual July meeting must take place outdoors in Lambeau Field as it draws around 10,000 people.

The Curly Lambeau decades gave way to the Lombardi era when the serious Brooklynite arrived in Green Bay in 1959. More than a football legend, Lombardi became an American icon, leading the Packers to five championships in eight seasons, including the first two “Super Bowls.” His incredible achievements as a coach led to the eventual re-naming of the championship trophy to the Vince Lombardi Trophy.

The Packers 1961 championship win over the vaunted New York Giants – a David and Goliath match-up on several levels – engendered the new moniker, “Titletown,” after Press-Gazette advertising manager, Jack Yuenger, had signs painted with the name before the home game. It was an obvious dig at the team from Gotham from a city that wears its smallness not as a chip on the shoulder, but as superhero’s cape. You can have your skyscrapers; we’ll take the championships.

It’s not enough to compare the Packers with other franchises in pro football – there really is no other organization like it in American pro team sports. Along with being the only publicly owned team (a practice that is technically illegal by current NFL regulations), Green Bay – with its population of just over 100,000 – is not only the smallest city by far to own an NFL team (Buffalo is second with more than twice the population), it is also smallest municipality to own a pro team in any of the four major sports. How small is Green Bay? A look at recent census figures ranks its population just below these metropolises: Gresham, OR; Frisco, TX; High Point, NC; Peoria, IL, and Billings, MT to name few.

But it’s the passion for and relationship between the city and this team that is most remarkable. The Packers have sold out every home game since the Kennedy Administration, and the waiting list to get season tickets stretches into the 22d century. To go to a Packers’ game in Green Bay – something I’ve been very fortunate to do on a couple occasions is like no other spectator experience in sports. The entire city is consumed by the event. The team’s stadium is situated amidst a sea of ranch houses with most opening up their front lawns for cheap parking on game day. The hearty smell of barbecues wafts through the air, giving the town an almost collegiate atmosphere.

The Green Bay Packers – like America itself – are a study in ironies: the smallest city owning a franchise in the largest professional sport, a non-profit corporation in one of America’s most commercial businesses. It is fitting, then, that they should win the championship in Dallas – home to the Dallas Cowboys – that most market-driven of sports franchises. The Packers’ Super Bowl victory taking place on the artificial heath in the Cowboys’ glimmering new domed stadium that looks as if it were a backdrop for the movie, Blade Runner.  While the Cowboys may claim the name “America’s Team,” the Packers exist only through the love and participation of its community – and what’s more American than that?

Today the Packers return the Lombardi Trophy home – to a blessed realm with thousands of front porches: Titletown, U.S.A.

The Right Way to Kick a Football