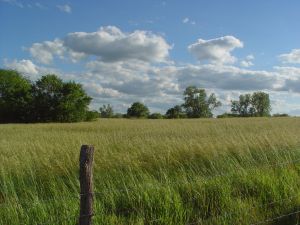 Louisville, Ky. When Wendell Berry and Wes Jackson took a proposal called The 50-Year Farm Bill to Washington almost two years ago, they had no illusions that they were going to get a Senate sponsor out of the trip or hear some of their suggestions immediately proposed for Congressional debate.

What they did hope was to start a conversation, here and there all over the country—conversation that might lead us to solve the nagging problem of how to feed both ourselves and the multi-billions of people worldwide our future is likely to hold, and away from wranglings over farm subsidies to Manhattanites and the food stamp program (now called SNAP, and whose funding takes up the wolf’s share of the federal Farm Bill allottment).

Those two items deserve some discussion, granted. But we would do well to remember that if we take every subsidy cent away from nonfarmers, and finance the Supplemental Nutrition Assistance Program to the level of its proponents’ fondest hope, none of that will matter if we can’t grow enough food to feed ourselves.

It is food production—also known as “farming”–and land use that are the core issues in any debate about food itself, be it local or international, slow or fast. Yet so often discussions of food-and-farming devolve into discussions of food-only–and often into debates about gourmandism, which is a very nice job, when you can get it. I like a good meal myself. But before Julia Child could lift a pan off her kitchen pegboard, or Marcella Hazan raise her rolling pin above a lump of pasta dough, somebody had to grow the raw materials. And while tonight’s roast chicken is soon to be a happy memory, tomorrow’s need for yet another dinner looms apace.

Do your eyes glaze over at any discussion of farming? (Ah, dear readers, I have seen some of you yawning.) In that case do as Dr. Jackson cheerfully suggests, and think of the 50-Year Farm Bill as a 50-Year Eating Bill. Because I feel sure you like to eat. And without the one you cannot do the other.

Here is the plan in a nutshell: The 50-Year Farm Bill proposes the government set aside $50 million annually for eight years to sponsor 80 plant breeders and geneticists to develop perennial grain, legume and oilseed crops, plus 30 agricutural and ecological scientists to develop the needed agronomic systems. (I should say here that Dr. Jackson and his co-author Fred Kirschenmann of the Leopold Center do not want money for their own organizations.  The Land Institute will offer its germplasm to other researchers for free.)

Why perennial? To keep our land farmable. Wes Jackson likes to say that farming is akin to mining, and that we’ve been living for thousands of years off the energy formerly locked in our soils. Now the seam is running out. In an effort to marry farm practices to sustainable soil use, the Land Institute has been working for thirty years to develop perennial crops that can be grown in fields of mixed species, closely paralleling the way plants grow in nature—closely mimicking the great prairie, actually. It’s no accident the Land Institute is in Kansas.

Researchers there have concentrated on grains, legumes and oilseeds because about 2/3 of our calories come from them. Man does not live by bread alone, but he does eat an awful lot of it.

Is perennialization possible? Dr. Jackson thinks so. He says his group is about eight years from being ready to send out seeds of a perennial wheat relative–an intermediate wheatgrass called Kernza™. (Once in a while you can get a sample.) Other crops in the works include a perennial grain sorghum, a soybean substitute called Illinois bundleflower, sunflower, and rice.

But there is no quick turnaround for this enormous project. While Dr. Jackson and his colleagues hope to have the wheat substitute in less than a decade, he expects the other crops will require 25 years to develop. In the 50-Year Farm Bill, the rollout for those other perennials is 2044. He and Mr. Berry, for two, will not live to see it.

I’ll ask it again: Is perennialization possible? I don’t know myself. In a world with so much hunger, and with so much human pressure on our arable land, it seems worthwhile finding out—and to start by having a conversation about it, among land grant universities, farm and environmental organizations, and within our political parties, too. There isn’t much of a farm constituency anymore; it’s limited to a few states and a remarkably small number of counties nationwide. But as Mr. Berry and Dr. Jackson have pointed out, every voter has to eat.

Embattled: The Story of the O’Hanlon Fresco