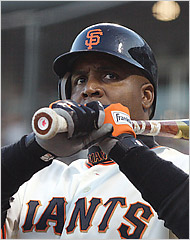 With the Barry Bonds’s trial ending with a slap on the wrist for the lesser charge against him and a mistrial on the greater charges, it is time to divulge now the true secret or secrets to Bonds’ success on the ballfield.

Barry Bonds is probably not using them anymore.

But everyone noticed when he first started using them.

His late-career home run surge coincided with his use of them.

He certainly wasn’t the first ballplayer to use them.

In using maple bats, of course.

It’s not Bonds’ use of the hardstuff that best defines him but his choice of hardwood.  That’s the first secret. In addition to his experimentation with lumber, the history of baseball and the epic tradition combine to reveal a yet another and more astonishing innovative feature of Barry Bonds’ epic feat of becoming home run king: Bonds is the first to do it without a nickname.  Whether it’s Homer or homers the meaning of maple and of monikers only becomes clear when you take the long view through baseball and epic lore.

First, every epic achiever sports a fitting appellation. Sometimes alliterating, sometimes rhyming, sometimes ironic, a good epithet at least reveals some key aspect of an epic character.  And so it sticks. Which makes it ironic that nothing has proven adhesive in over twenty years to a man named Bonds. Further highlighting this glaring lack, was that Bonds outhomered —mirabile dictu—Hammerin’ Hank.  Bonds may have surpassed the numbers but never that name, which Aaron’s peers often reduced to the brilliant and more concise kenning, ‘Hammer.’

And who in Hell is George Ruth, but ‘The Babe?’ Speaking of the underworld, where every doer of epic deeds visits at least once, how will Bonds introduce himself to the swift-footed Achilles, crafty Odysseus, Stan the Man Musial, or the Splendid Splinter Ted Williams: “Hi, I’m, um, Barry from San Francisco?” Of course, Teddy Ballgame through no fault of his own is frozen, but that is always a possible fate for edgy epic temperaments e.g. Han Solo or Satan in Dante’s Inferno. The mention of Satan should make us pause and give the Devil his due in the case of Bonds. Whenever Bonds made his deal with the devil, old Beelzebub certainly paid up with Bonds both having become the new home run king and now getting this mistrial.

Bonds, however, has always been a novelty. The strange thing about Bonds going down to the crossroads: he already was the greatest combination of speed and power the game had ever seen. But he was never going to be the greatest in either steals or four-sackers. His pursuit of Aaron, in addition to the ethical lapses, the disregard for personal health, and the moral turpitude, fittingly involved several novel technologies. And so we come to the meaning of maple.

While Hammerin’ Hank hammered with ash, Barry Bonds bashed with maple. This is new. All heroes wield ash: from Beowulf to The Sultan of Swat, Hector in the Trojan War to the Iron Horse in Yankee Stadium. For Aaron and for generations of big leaguers, ash was the only available choice. Bonds, on the other hand, is part of a new generation with new performance enhancing technology previously unknown to baseball. The proliferation of maple bats in the late 1990’s was one such technological innovation. Previously, bat manufacturers could not guarantee the soundness of maple bats, but new scanning technology overcame that obstacle and maple became the new thing.

Maple, nota bene (and unlike some of Bonds’ other novelties), is perfectly legal, approved by the league, offers no discernible advantage to the hitter, and imperils only the one-in-a-million bystander or baserunner. What maple provides, in light of the epic tradition, is an objective correlative, an emblem, to the enigma that is Bonds. Queen Elizabeth’s epic bard, Sir Edmund Spenser, develops in his epic what has been called the ‘maple tree principle’—things are not always what they seem. A solid piece of maple is a choice hardwood, but historically one could never know if it was truly solid. What seems solid could be rotten at the core. Thus Spenser describes maple as “seldom inward sound.” This notorious unreliability that frustrated Elizabethan joiners and craftsmen is what stymied baseball bat manufacturers for decades. For Spenser it becomes a motif for all forms of contradictions and hypocrisy: false seeming true, inner weakness disguised by outward strength.

The use of maple then is all too apt an emblem for the inner corruption of a sure-fire Hall of Famer’s faustian bargain: he with the sweet swing and the sour attitude, a clean and sober son of an alcoholic yet a steroid-junkie, an impotent Hercules, the Natural turned unnatural. He’s no Hammerin Hank, but Bonds must be dubbed something. (Dear readers, show us what you got! You pitch ‘em we’ll catch ‘em!) Perhaps “Maple Barry” hits the nail on the head. Those who long for poetic justice, for all to be right again in the universe, for Bonds to somehow reap what he sowed, need look no further than the utter joylessness of his triumph.