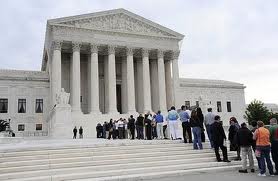 Dahlia Lithwick and Ezra Klein are a couple of my favorite pundits in the whole blogosphere. Lithwick is snarky, and Klein is wonky, but they’re both smart, opinionated, insightful, and informed. They’re also both pretty standard members of the progressive, bourgeois liberal class, which means that, in their own different ways, they’re pretty committed to making things work the way their own senses of enlightened rationality tell them they should. Which is why they’ve just written two of the most forehead-slapping posts I’ve ever seen from them: it appears that it’s very frustrating for them to have to look at the forest rather than the trees.

The forest under consideration here is nothing less than the U.S. Constitution itself. Specifically, it’s Article 3 they’re looking at, the part of the Constitution which gave us the Supreme Court; that, and at Marbury v. Madison, the 1803 Supreme Court case that established the principle of judicial review, the principle which allowed the justices on the Court the power to overturn duly legislated acts of law by judging said acts to be unconstitutional…and which, over time, has made the Court what it is today: a dominant, ofttimes domineering, and decidedly undemocratic player in our continuous national debates over what powers the different levels of government should have, and what freedoms individual citizens enjoy, and how to balance the two. The issue is, of course, the Affordable Care Act, and the claim that one of its key features–the mandate that individuals obtain health insurance through their employers, buy it on the open market, or obtain it through subsidized exchanges–violates the limits placed upon the powers of the federal government. For Lithwick and Klein, as well as for most judicial scholars, it’s a no-brainer: of course it doesn’t! All the individual trees–Congress’s power to regulate commerce power, the necessary and proper clause, the taxing power, all of them–appear to line up so as to make the case obvious: the Affordable Care Act is a legitimate democratic decision, which makes use of legitimate government authority, to achieve a legitimate (not to mention moral) public end. 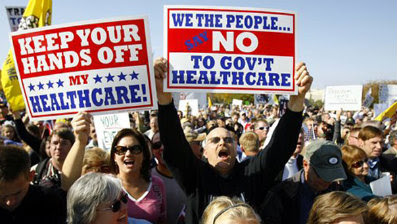 Ah, but then there’s that pesky forest–a forest which is filled with people who, rightly or wrongly, have apparently decided that this particular expansion of federal power (and it is an expansion, no doubt about that), especially coming at this particular political moment, is a bridge too far. The time has come to draw a line in the sand–and if five judges on the Supreme Court choose to so draw, even if the precedents clearly point otherwise, who is to dispute them? Under our present system, apparently nobody. That is what opponents of the ACA are counting on, and which makes Lithwick and Klein–and other good members of the liberal establish–experience some genuine existential angst.

Lithwick, in considering the kind of explicitly partisan arguments–that is, explicitly invoking a particular set of party-organized and party-articulated constitutional arguments–that are being brought forward in this dispute, arguments which have so far been rejected by majorities of three federal courts and embraced by majorities on two (with the results have tracked perfectly with whether the judges in question were Democratic or Republican appointees), shakes her head. She confesses herself to be a “lifelong believer in judicial review,” but that what she sees as the “absurdity” of the arguments being made, it makes her wonder if it isn’t time to stop “believing in the integrity and infallibility of the judicial branch” and take seriously the case against a political system that places such enormous power–and thus creates such hysterical stakes–on the decisions of nine unelected political appointees. Klein may not be struggling with quite as much a crisis of faith, but still admits that everyone has apparently “substantially underestimat[ed] the partisanship of the judiciary on a big, polarizing issue like this one,” and is fearful for our constitutional system itself, as “it’s bad for the judiciary…[to look] less and less insulated from politics.”

The Supreme Court, insulated from politics? How can anyone actually write lines like that with a straight face? Hasn’t there been more than enough research on this topic already? The U.S. Supreme Court, just like every other federal or state court, is a political institution. That’s not to argue that upholding the ideal of the law as a neutral adjudicator in the midst of a politically divided and pluralistic nation has no relevance to maintain a stable body politic; it surely does. But the fissures which have emerged over the Affordable Care Act are reflecting something much larger than the breakdown of the sort of consensus which folks like Lithwick and Klein, and many millions of others, have apparently long assumed to be natural; it’s the democratic tension of creating a polity premised upon self-government, and then extending and contorting and corrupting that polity to such a degree, over such a long period of time, that the more egregiously undemocratic elements of it can’t help but become focal points of crisis. Not a total, immediate crisis, to be sure; the cynics and doubters of democracy will observe that most people, most of the time, would just rather not have to think about what is involved in governing themselves, in caring for their own community, and paying the costs of such, and the fact that the obviously skewed nature of Supreme Court decisions over the years haven’t much affected the overall legitimacy of the Court in the eyes of most Americans might be taken as evidence of that fact. But the additional fact that, in the wake of the passage of the ACA, we have seen moves of the sort which the dominant figures in our political class would have considered utterly scandalous only a few years ago–with nearly a quarter of the states in the union talking seriously about reviving nullification, a constitutional idea of state sovereignty that had its last hey-day during the struggle over the desegregation of public schools–suggests that the forest may be on the move, and contented defenders of the individual trees within our national forest need to wake up to that fact.

My position is that, with every additional bit of timber which is thrown on the constitutional fire, I see more and more wisdom in writers as different as Bill Kauffmann and Peter Levine–two thinkers who, despite their likely huge disagreements, both recognize that the problem isn’t with the trees in the forest, but the size and shape of the forest itself. We all need to continually re-educate ourselves in what it means to take responsibility for our lives, our families, our neighborhoods, our public spaces–but we also need to find or build contexts where conceiving of that responsibility is even a possibility. It just may not be possible in a continent-wide nation, where authority is centralized and participation is made overwhelmingly dependent upon access to elite expertise, restricted venues of access, and most of all money. Perhaps there are “progressive” (though I would call them populist or communitarian) routes to empowerment, or perhaps secessionist solutions are the only ones still on the table. Or perhaps there is still some tinkering that can be down around the edges of our constitutional system, to make it slightly more governable. (Matt Yglesias is right that part of the reason why the Supreme Court has been able to make itself into such a dominant entity is because our legislative branch, particularly the Senate, is marvelously dysfunctional.) Those kind of meliorist solutions have an appeal to me, as an academic–and therefore, as much as I try to get myself and my students out into the real world right next door to us, and as much as I try to expose them and myself to radical alternatives, pretty much a member of the bourgeois liberal political class right alongside Lithwick and Klein as well. And so, for better or worse, I’ll probably keep supporting those solutions, and keep reading those authors; after all, they are good writers, and they do have good ideas, sometimes. But overall, I confess I have less and less confidence in the way we’ve “constituted” this particular American forest every day.

The leaders we deserve