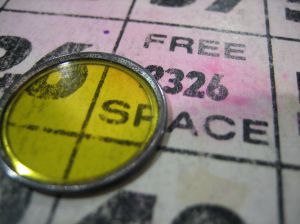 In the ethnic community where I was raised there was a ritual that strangers used when meeting for the first time. It was called “Dutch Bingo” but was actually more like Twenty Questions. Picture it! You meet someone you have never met before and after exchanging names you begin taking turns asking questions about where you were raised, where you went to school, and what your mother’s maiden name is. Quick as a flash you are talking about brothers and sisters, uncles and aunts, old teachers, past neighbors, until finally you find a line of links to someone you both know. That’s Bingo. There’s something oddly satisfying about it.

I used to think that this ritual of ethnic Bingo was a peculiar habit of the Dutch, but not long ago I was the interested witness to a round of Latino Bingo. I was visiting at the home of my daughter’s friends. They call me “Tia Maria” because they know me too well to call me by my surname, but they would not think of calling me by my first name. Afterall they are my daughter’s friends. It’s an ethnic thing.

My daughter and I were the only “Europeans” at the dinner table. All the others were from various countries in South and Central America. Not all of the other guests knew each other, but it did not take long before they had discovered that the future in-laws of one young man lived in the same town as the aunt of one of the young women. Two of the guests had attended the same university in the United States and had a cluster of acquaintances in common although they themselves had not met before. And so it went until everyone at the table was securely on the map. So was I. By the end of dinner they were all calling me “Tia Maria.”

Ethnic Bingo illustrates the difference between a sociocentric and an individualistic sub-culture. In Bingo-land it is not appropriate to talk about yourself until you have found some shared link. In general it is more acceptable to talk about who you are (your social fabric) than what you do (your claim to fame). Even a faint hint of bragging is awkward because more important than your own achievements is placing yourself on the relational map.

I can recall times in my own past when being in the presence of people playing Dutch Bingo embarrassed me. It was awkward. A little like opening your wallet and counting your cash in front of someone who did not know you well. If done at all, sizing up the contents of your wallet should be done discretely and in private. But being hidden was not the point of Bingo as I remember it from my own past. In a community of immigrants social capital was important. We huddled together in enclaves to take on the challenges of surviving in an adopted country. We were definitely sociocentric, and our survival depended on it.

Neighbors knew about each other’s struggles: who was ill, who had died, whose father got injured at work, whose mother had a nervous breakdown, whose child was in trouble with the police, which couple had finally split up, whose house burned down, or whose business went broke. There was always tragedy in the news circuit of the community, and everyone knew when “one of ours” was in difficulty.

What we expected from within the group was not the same as what we expected from outside of it. “Outsiders” did not understand our way of life. We liked some of them, but we did not know what to expect of them. We did not treat them unfairly, nor did we expect them to be unfair to us. The separation between us was not due to animosity, it was due to lack of familiarity. We did not really know each other. The way we were related to outsiders and the way we were related to insiders worked on different assumptions.

There is an old English expression that catches something of the way we lived. We knew the value of “kith and kin.” Your kin are your relatives, the members of your tribe: mother, father, brothers, sisters, aunts, uncles, cousins, and more. Your kith are those whom you know. They may not be related by blood, but they are joined to you by the honor system of duty. You treat your kith with kindness. That goes beyond being nice to them; it means you fulfill your duty toward them as if they were your kin. Five hundred years ago that was also the meaning of kindness. It referred to the way you fulfill obligations to your family and tribe.

Sometimes it is comforting to be part of a community, and sometimes the contradictory messages that clatter around the group are confusing. Keeping the commitment is not easy. Others in the group make choices you would not make. Others are acknowledged for work when you are taken for granted. Belonging to a group involves dissonance, an inconsistency between what we think of ourselves and the way we see ourselves when we are participating as one of the group. The fit is seldom perfect, but at the bottom line it feels better to be part of the group than outside it. That is what it means to be sociocentric.

In an ethnic community “insiders” are not necessarily people you like. Often you don’t. But they are the people who play by the same rules you do, and they are the people least likely to misinterpret you. You trust them, and they trust you. Those outside your circle would not need to know if you were in dire circumstances, but those within your circle know without your needing to tell them. In some way or other they come to your aid. If their fortunes take a down turn you do the same for them.

There is no need to romanticize the kindness in sociocentric communities. It is not like the generous neighborliness of Little House on the Prairie when Caroline Ingalls goes to her troubled neighbors with a picnic basket of warm soup and freshly baked bread. Often the dutiful kindness of kith and kin is offered without excess of sympathy or sentimentality. It is neither heroic on the part of those who give it, nor is it flattering to those who receive it. But it is strong. There is a deep sense of security that grows from the implicit commitment to survive together.

I am grateful to my daughter’s Latino friends for inviting me to share a dinner with them. Watching them map their social connections stirred some nostalgia for my own ethnic group with which I have less interaction over time. Now and then I still play Dutch Bingo with some old friends, but usually we do it with a good dose of humor and even a little embarrassment because it is no longer serves an essential function for us. Still after the dinner with my daughter’s friends when I opened an email addressed to Tia Maria I felt touched. What can I say? Bingo!