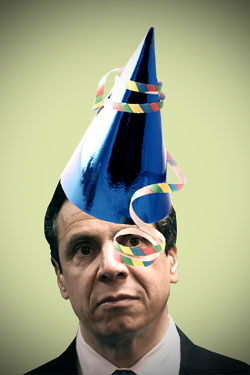 Devon, PA. As my latest pair of essays on FPR scrolled across the screen, New York Governor Andrew Cuomo was keeping the family legacy alive of undermining the obligations of public officials, Catholics, and all persons to live, act, or govern in keeping with the natural law.  For reflections much more informative and significant than the motorcycling glee about the Stonewall, I direct the reader to the following articles.

In an interview with National Review, Robert George weighs the significance of New York’s institution of “Gay Marriage.”  The legislation effectively ends marriage as a reality in a state whose populace had de facto ceased to recognize the centrality of marriage to the life of persons and society long ago.  George observes of the two most powerful executives in the state:

Gov. Andrew Cuomo and Mayor Michael Bloomberg, the state’s two most powerful and influential politicians, plainly buy much, if not all, of the ideology of sexual liberalism and publicly lead their lives in accordance with it. Although they claim to be supporters of marriage who merely want to “expand” the institution (or expand “access” to the institution) out of respect for what they regard as the civil rights of people to have their romantic partnerships (whatever their shape) recognized and legitimated by the state, both are reported by New York media to openly cohabit with women with whom they are not married. They do this not in defiance of their stated beliefs about sexual morality and marriage, but in line with those beliefs. Neither supposes that he and his mistress are setting a bad example for children or undermining the public’s faith in important marital norms. As orthodox sexual liberals, neither the governor nor the mayor believes in a conception of marriage in which marriage is normative for sexual partnering; indeed, neither believes in norms of sexual morality as traditionally conceived, even apart from any question about same-sex partnerships. Both regard “civil marriage” as nothing more than the legal blessing of romantic partnerships, and neither gives any indication of ever having remotely considered an alternative view. Both have so thoroughly absorbed the premises of sexual liberal ideology that the possibility of an alternative doesn’t cross their minds. For them, it is all a matter of “us urbane, sophisticated, tolerant, open-minded, defenders of civil rights, against those ignorant, intolerant, hateful homophobes.”

Reflecting on the similar strategies pursued by the homosexualist movement in Canada, which has largely reordered public life in that society as a perpetual therapeutic boosterism of deviance, and that of the United States, Canadian writer, John-Henry Westen, wisely returns our attention to the central question of all our public debates on marriage — and what should be the central question on all our debates regarding sexual ethics, namely,

to teach the truth that homosexual acts are perilous to the body, and especially to the soul. To fail to do this would be to fail to address the heart of the matter.

In most people’s minds, arguments about the goodness of (heterosexual) marriage and raising children can be accepted right along with homosexual ‘marriage.’ Arguments that gay “marriage” will be a detriment to society, or that we should not alter traditional definitions, are tangential. The core issue is the Church’s loving concern for those individuals who are putting their bodies and souls in danger with illicit and dangerous sexual practices, and society’s encouraging such behavior with the title of ‘marriage’.

Do we care enough about our friends, neighbors, and family members to save them from this and other dangers to body and soul?  Or do we follow Locke, Jefferson and Mill in reducing morality to the “break-my-leg” test?

The argument against homosexualism is fundamentally a contest against the reign of voluntarism, the reign of desires furnishing their own justification against reason, the natural purposes of our being, and the conditions in which we dwell.  For those who doubt that the homosexualist ethos wounds the soul and kills the body, I recommend (per an FPR reader), this painful personal essay by a Catholic who has lived with homosexual tendencies for many years and who has suffered greatly in consequence.  The candor and poise he is able to maintain in the essay is greater than most of us could manage.  Speaking from long experience, Ronald G. Lee writes,

I would rather my essays for FPR attended to questions that more obviously addressed the interests, much less met with the approval, of those who would undertake the preservation and promotion of local culture, local agriculture, and livable urban and rural communities.  But these things cannot be maintained on their own; important though they are in themselves, they have largely been destroyed through the libido dominandi that leads to the denaturing of the human person from orientation toward the one true happiness, and the deracination of human desire through the globalization of a state and marketplace that is in principle governed by amoral laws.

Unless we restore devotion to the foundational units of human existence — the family clan as moral arbitor and domestic church; the local parish as the oracle of God and the templum reserved for the contemplation of absolute truth; and the small community as the stage on which we fulfill the inveterate ambitions of our political natures by debating the nature of and means to the Good Life — then we may possess nothing else good in this life.

In losing these binding communal institutions, we may of course gain apparent goods.  One can live in a world made to the order of one’s unbridled will for days or decades.  And one can transfer one’s worship of the God of Order, Love and Justice to one of license, “fairness,” and “equality.”  But we are all called to more than this as social animals and rational animals: as beings, in other words, made in the image of God and incapable of living well with anything less than a certain vision of the Trinity — those Persons who model for us what a real and perfect community looks like.

We are called to a condition of self-giving rather than one of wilfull domination.  The most ancient wisdom has always taught us as much, but our age reveals us to be a distinguished people: one even less capable of learning from past wisdom than from the present truth of our rational souls and limited bodily natures.  As we tarry in this condition, we spend the cultural capital of Christendom, and sooner or later we are, to paraphrase Maggie, going to “run out of other peoples’ cultural capital.”

Matthew Schmitz justly argues, in a new essay on the First Things site, that the significance of the events in New York and elsewhere lies not in the apparent victories of those who would destroy by redefining marriage.  Such persons will not exactly be perpetuating their ways by having many children.  The significance of the marriage debate, then, lies chiefly for those who are having children, who do believe in the meaning and moral significance of human life, and who care about perpetuating the great legacy of Christian culture.  Such persons have the opportunity to respond to the outrages against vocabulary and nature by recovering the battered traditions of family, parish, and town.  As a society declines, it is only the faithful remnant who prepare for its regeneration by finding new ways to give voice to ancient wisdom.  Given that most Americans still believe, in principle, in the integrity of marriage and recognize, however vaguely, the costs of the sexual revolution, we have reason to hope that the seeds of such regeneration, given time, will take root and flourish.

The Death of the Family

Deracinated Meritocrats and the Marriage “Debate”

You Say Liturgy, I Say Lechery