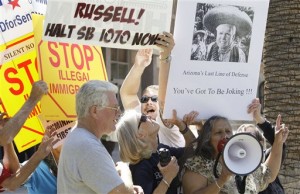 In the days leading up to this year’s Major League Baseball All-Star Game, which will be held in Phoenix on July 12, there is sure to be a renewed a focus on Arizona’s SB 1070, which reached its first birthday on April 23. From the moment SB 1070 passed, opponents promised that the game would be surrounded by protests, and they have worked vigorously, but to no avail, to get MLB to move the game out of Arizona.

Thus far, much of the law is held up in court. A U.S. District Court judge barred the implementation of many key provisions, including the law’s stipulation that police determine a suspected alien’s status before releasing him. The Obama administration famously decided to sue Arizona over the law. And last month, the U.S. 9th Circuit Court of Appeals refused to overturn the district court’s ruling. Arizona is appealing.

There is little to be added to the discussion of SB 1070 at this point, I suppose. The national debate has, like most of our debates, been characterized by rational, well-informed discussion, not to mention civility, charitable respect for opponents’ views, and a sturdy refusal to use the law for as a platform for personal gain.

Or . . . maybe not. I did not support the law’s passage, for various reasons: there is no crisis of illegal-alien violence on or near the border, despite some recent tragedies; I do not wish to give more power to the state, including megalomaniacs like Joe Arpaio; the real problem is the phony and scandalously counterproductive drug war; and I do not wish to see the reasonably good relations that exist between Arizona’s white and Hispanic communities become poisonously California-ized. Even so, soon after the law’s passage I became somewhat embarrassed not to have been for it, given the hysterical, unhinged, self-righteous, hypocritical, asinine reaction of out-of-state opponents. I’d wager that few of them have ever given two seconds’ thought about real flesh-and-blood Arizonans, including the brown-skinned ones with their embarrassingly retrograde social views and kitschy religious practices.

Here’s what really interests me, though. For decentralists who believe that Arizonans should decide what kind of Arizona they want, and Vermonters the kind of Vermont they want, and Minnesotans the kind of Minnesota they want, the threat of boycotts, taking away the All-Star Game, canceling conventions, and the like should drive home an important point: decentralizing political power, even if it were achieved (and I think we can agree that we aren’t exactly on the threshold of success), will have little impact, in terms of making a community’s self-governance truly possible, if it isn’t accompanied by a corresponding increase in our tolerance of other citizens’ political choices.

Since the interdependence of state economies is unlikely to be reduced — I don’t even know of anyone who wants such a thing — and since every hot-button issue is instantly nationalized by pressure groups (thanks to the digital technology that some people, incredibly, continue to think has meant a flowering of independent voices), states will still be cowed into towing the politically correct line every bit as effectively as they are now controlled by federal regulations, the federal purse, and federal courts.

Here’s the truth about early-twenty-first-century America: We are as shackled by thou-shalt-nots as any Victorian ever was — despite the myths we tell ourselves about being free — and even achievement of the decentralist political dream would help little, in and of itself, to rectify the situation. It is a golden age for genital freedom. We have lived to see the Triumph of the Penis, the Victory of the Vagina! But this freedom serves only to distract us from the larger, more profound, and utterly stultifying orthodoxy that grows more rigid with each passing day. The centralized state has less to do with our slavery than we think.

Under the Mogollon Rim