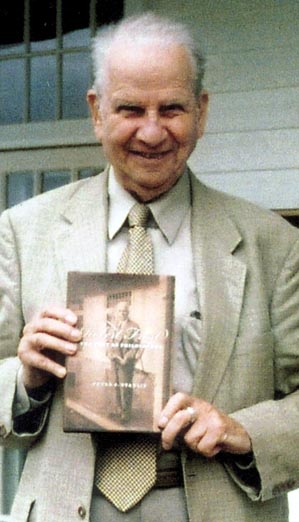 It was a dark and stormy night when I first met Peter Stanlis. The year was 2000. I had recently become senior editor at ISI Books, and he had just arrived for our first-ever author event. I was glad to see him—primarily because I was glad to see anyone not wearing an ISI nametag. It was a sopping-wet evening in Chicago, and no more than five other people showed up for the lecture. Stanlis, God bless him, had driven all the way in from Rockford. The thought of reneging on his affirmative RSVP seemed not even to have occurred to him.

Peter Stanlis must have been eighty then—an old man, hard of hearing, but mentally and physically vigorous, opinionated, and determined to finish his life’s great work, an authoritative study of Robert Frost’s philosophy. Stanlis died on July 18, having accomplished his goal.

He is not now and probably never will be best remembered for his Frost scholarship, as impressive and original as it is. That honor is reserved for the study of Edmund Burke that he published in 1958 under the title Edmund Burke and the Natural Law. That was an era in which American scholars, and especially the new conservatives, were rediscovering Burke and reinterpreting him for their own purposes. Stanlis’s contribution was as important as anyone else’s, not excepting Russell Kirk’s.

Kirk, of course, cast Burke as the progenitor of modern conservatism in The Conservative Mind: From Burke to Santayana (1953). He was not the only dissenter from contemporary liberalism to look to Burke for intellectual orientation. Francis Canavan, Ross J. S. Hoffman, and Carl Cone were also making a Burke revival on the right. But before Stanlis’s work appeared, virtually no one had dared to portray Burke as a natural law advocate. Burke was the model of a prudent statesman, an incisive critic of Enlightenment rationalism, but surely nothing so philosophical as an exponent of the moral natural law. Quite the contrary: for generations he had been grouped with David Hume as a natural law skeptic.

Stanlis’s scholarship challenged and, in many quarters, ultimately changed that conventional wisdom—and he was self-consciously proud of that fact in a way that somehow came off as endearing rather than vain. Kirk and Will Herberg, among others, championed Stanlis’s work, and it quickly became a standard reference point in the postwar conservative canon.

Did you catch the year? That was 1958—fifty-three years ago. Already Stanlis had conceived his next great project, a project that, he was confident, would do for Frost scholarship what his previous book had done for Burke studies. Stanlis, a Middlebury College alumnus, had met Frost at Bread Loaf while an undergraduate. He began to conduct extensive interviews and a correspondence with the poet. They became friends, and in 1944 Stanlis promised Frost that he was going to write the “best book on” him that “he had it in him to write.” Frost was encouraging.

The decades went by. Stanlis enjoyed a long teaching career at Rockford College, engaged in the intraconservative debates of his time (he was staunchly in the traditionalist camp), served as a Reagan appointee at the National Endowment for the Humanities, and worked on his big Frost manuscript. For whatever reason—perhaps because his scholarly style was marked more by dogged thoroughness than virtuoso brilliance—he had trouble finishing it. People began to wonder if the thing would ever appear. I was among them.

It was Frost that brought me back into Stanlis’s orbit. When I arrived at ISI, it was understood that ISI Books would publish the Frost book, assuming Stanlis ever turned it in. After that first meeting in Chicago, Stanlis would write me, periodically, to update me on his progress and to suggest periodicals and reviewers to which we must be sure to send galley copies. I admired his forethought, but this rather seemed to put the cart before the horse.

In October 2003 (I know it was then, because I am tormented by a vivid memory of sitting at a Tucson resort’s bar, crying out in anguish as I watch the doomed Steve Bartman reach over the railing . . .), Stanlis convened a Liberty Fund colloquium on Frost. At such colloquia, fifteen or so participants sit around a table and discuss an assigned text. Stanlis, however, was by nature not a discussant. He knew Frost better than anyone in the room—perhaps better than all but a few dozen folks in the country—and who were we to challenge him? We spent two days tentatively advancing theses about Frost’s meanings, intentions, and beliefs, then sitting back to await Stanlis’s ex cathedra pronouncements as to who was right and who was wrong. It was a memorable weekend.

Finally the day arrived when a manuscript—still not quite complete, but almost—arrived in the mail. At least two daylong meetings with the exacting Stanlis followed, in which we covered everything from typesetting to marketing. Revised versions of nearly every chapter arrived at maddeningly irregular intervals. Clarifying phone conversations with the quasi-deaf Stanlis had to be held at Harley Davidson decibel levels. I despaired of keeping things straight and made the whole thing my colleague Dan McCarthy’s problem.

Thanks to Dan and others, Robert Frost: The Poet as Philosopher, came out in 2007. It did not have the impact of Stanlis’s Burke book. It couldn’t have. We were not, in 2007, on the cusp of a new intellectual/political movement whose proponents could claim Robert Frost as inspiration and forebear. Nor is the intellectually unsystematic Frost as clubbable for conservatism as was Burke or as Stanlis seemed to think—as at least one reviewer pointed out.

Nevertheless, Stanlis’s book is doubtless the authoritative study of Robert Frost’s philosophy. Stanlis  characterized that philosophy, somewhat confusingly, as dualism. He did not mean to suggest that Frost was a Cartesian, but rather that he was neither an idealist nor a materialist. “Frost regarded spirit and matter as the basic elements of reality. Human nature was composed of spirit and matter, body and soul.”

At least in part because of Frost’s influence, Stanlis believed the same. And whether or not his volume ultimately succeeds in challenging the conventional wisdom that surrounds Frost, he had kept his promise to his old friend and mentor.

He was good at that.