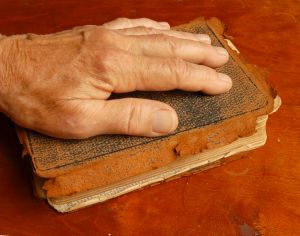 What has happened to the obligation to tell the truth? What consequences are there for asserting an alternative to the truth, something no longer considered a lie but rather another point of view? It seems that the obligation to tell the truth is out of fashion, and speaking falsehoods in our own interest has become acceptable behavior with few consequences.

A few generations ago rules about telling the truth were among the first lessons parents taught their children. They were close in line with other basic rules like those about not running into the street and not hitting your sister. Stealing a cookie from the cookie jar was a small misdemeanor with a small consequence, but lying about it was an offense on a different scale. Parents could understand the temptation to steal the cookie because kids get hungry, and cookies taste good. Telling a lie, on the other hand, was a sign of weak character.

Something has happened to the rules about lying. The Little double-speaks of fibbing have always been part of the social code. Parents of the homeliest babies are told their little ones are darling even if it is only their toes and belly buttons. A bride who is a match for Frankenstein gets called lovely, even if it is only her dress or bouquet. These are social forms we all understand, and the deceit is minimal. What has changed is the permission to tell real honest to goodness lies, and a growing acceptance that everyone has the right to engage in deceit if that is what it takes to defend self interest. Our culture has become cavalier about lying because we’ve become self-centered. The daily news stream is littered with examples.

When public figures tried to boost their prestige by claiming military honors they had not earned, Congress passed the Stolen Valor Act, a law that makes it a crime to lie about military service or medals of honor. If this sort of thing were rare it might have been passed off as insignificant, but self-promoting lies are not rare. There are over sixty cases in which individuals have been charged with violating the Stolen Valor Act, and over a thousand reported cases are still under review.

Even more shocking than the fact that people lie about valor is the fact that the U. S. Court of Appeals for the 9th Circuit decided the law prohibiting these falsehoods is unconstitutional because lying about heroism is free speech and protected by the First Amendment. The judge reasoned that if the judicial system did not make allowances for some kinds of deceit, the law would end up “criminalizing lying about one’s height, weight, age or financial status on Match.com or Facebook, or falsely representing to one’s mother that one does not smoke.”

In addition to offering an opinion that counterfeit valor is legal, the judgment of the court also raised doubts about whether these sorts of lies have anything to do with being a good citizen or a good person. Some degree of lying, it seems, is accepted as a legitimate way to serve self-interest, and increasingly the right to serve self-interest has become a high standard for judging behavior. That is quite a shift from the old fashioned view that telling the truth is necessary for getting along with others, and that getting along with others is necessary for having a good life.

False bravado about valor is not the only sort of lie to which we are becoming accustomed. Millions watched as a member of Congress looked into the camera and said he did not know if the crotch shots posted on line were really his. When that lie did not hold up he went on to suggest that a hacker had stolen the shots and posted them. Once he was cornered and out of excuses he was compelled to leave Congress so he could go home and deal with his distressed wife. Despite the fact that politicians in his party moved away from him like rats leaving a sinking ship, there were many supporters in the general public who sympathized with him. As one person commented: “What’s a guy gonna do if he gets caught with his pants down?”

Roger Clemens is another tarnished hero. After winning some of baseball’s highest awards he was accused of using steroids and human growth hormone. When confronted at a Congressional hearing by the testimony of one of his most trusted teammates, Clemens claimed that his accusers had “misremembered.” This time deceit got a hero in trouble, not because he lied in the first place but because he lied again under oath and before Congress.

Liar of the Year award should go to Casey Anthony. The public was outraged that the mother of a missing daughter invented a fictitious babysitter and accused her of kidnapping the child who had been missing for over a month. If those lies were not preposterous enough the public was also treated to the claims of her defense attorney who had the right to present the court with an alternate fiction that incidentally destroyed the reputation of Casey’s mother, father, and brother, who will have no chance to vindicate themselves. The Anthony trial is one of those occasions when ordinary folks who want to trust common sense begin to question whether courts have anything to do with morality and justice.

The need to lie is often defended as a right we each have to protect ourselves from attacks by others who want to make us look bad. The counterfeiters of valor try to level the playing field in a popularity contest. Anthony Weiner tried to defend himself against criticism for “electronic relationships.” Roger Clemens tried not to look bad after looking so good. And Casey Anthony was trying to sidestep an accusation that could send her to death row.

They aren’t the only ones mixed up about lies. It has become increasingly difficult to distinguish the rights of free speech from the moral obligation to speak the truth. Many are willing to argue that if it’s legal it’s moral if we think it is, because morality is an entirely personal and individual matter. And what makes a deceit illegal? Only if it is expressly forbidden by law. When it comes to lying it appears there is a lot of wiggle room.

Alan Dershowitz, an attorney who has made himself famous by defending high profile clients who seemed indefensible, stepped up after the Anthony trial to remind the public that the courts only determine what the law requires. He went on to say that if we are concerned about what is moral we should ask our priests and rabbis. And if we are concerned about how to define justice we should ask philosophers. Of course there are few consequences for disregarding the advice of priests, rabbis, and philosophers. The institutions in which their views are expressed have been fractured by the relativity of conflicting opinions. Their views may be interesting, but do they not make much difference in the real world of human consequences?

It appears that the advice of our parents has long ago been washed under the bridge, and the rules of thumb that used to support our trust of each other have been replaced by new rules better fitted to an age of self-interest. With regard to telling the truth they fall roughly along these lines: If you must lie, measure it against your own self-interest and make sure it is legal, and if at all possible try not to do it under oath. That is what we are left with unless we are willing to recommit ourselves to the belief that conscience matters and that living honestly and speaking truthfully is the better way.

The Triumph of the Datum