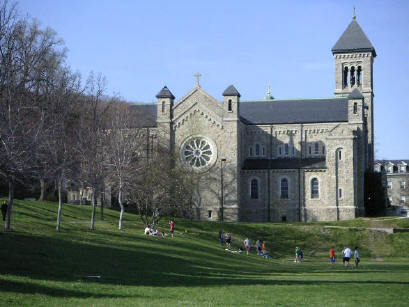 For those of you who were not able to be in Emmitsburg on Saturday, you missed a wonderful day. The rain stopped sometime in the night and the early morning sun burned away the low clouds. Well before 9am, people began to arrive at the Knott Auditorium at Mount St. Mary’s University. Soon, the trickle became a much more. When we began planning this conference, we really had no idea if anyone would show up. We told ourselves that 60 or 70 people would count as a success. By the morning of the conference, 151 had pre-registered, and a good number registered at the door bringing out attendance to nearly 200.

Needless to say, we were delighted and encouraged by such a turnout. Emmitsburg is not exactly on the beaten path, so it required some effort to attend. People traveled from as far away as Ohio, Vermont, and New York. Some drove in on Friday and stayed in a hotel. Others got up in the middle of the night to arrive at Mount St. Mary’s for our 9am start.

It was great to meet reader and others interested in human scale and healthy communities. It was especially gratifying to meet folks who up to now have been know by their names or nicknames in the comment boxes. Indeed, nothing substitutes for face-to-face reality.

The panels dealt with various cultural, economic, and political elements needed to build healthy communities as well as various impediments to achieving that goal. The audience was treated to talks on how liberal assumptions and technological innovations serve to keep us endlessly on the move. Another panel included a discussion of the economics of localism as well as a PowerPoint presentation by Jason Peters (aka The Bar Jester) describing how he has helped incorporate training in the “domestic arts” into a college curriculum. In the afternoon, panelists discussed the role of religion in creating strong communities and how a liberal education can attend to matters of place. And finally, speakers showed how strong communities can be fostered by state governments, farmer’s markets, and by implementing the principles of the new urbanism.   Our lunch speaker, Bill Kauffman, gave a stirring tribute to the goodness, decency, and, attractiveness of his particular place and encouraged us all to look for the same in ours.

Early on, when FPR was still in the planning stages, most of us thought of our little enterprise as a bit quixotic, definitely more fringe than mainstream. Events in recent months have conspired to put questions of human scale at center stage. Too big to fail is simply too big. The enthusiasm for globalization has been dampened by systems too big and complex for anyone to understand much less manage with intelligence. It is becoming clear that a return to human scaled enterprises and institutions is the only way to extricate ourselves from some of our most acute problems.

In short, and with all due modesty, it appears that current events are showing that the ideas that brought FPR together–political decentralism, economic localism, and cultural regionalism–are the future. We thank all who helped make Saturday’s conference such a success. We are already at work on the next event as well as other projects by which the ideas of FPR can be advanced. While difficult times may be ahead, the future of human scale communities looks bright.

Recordings of the conference will be available shortly.