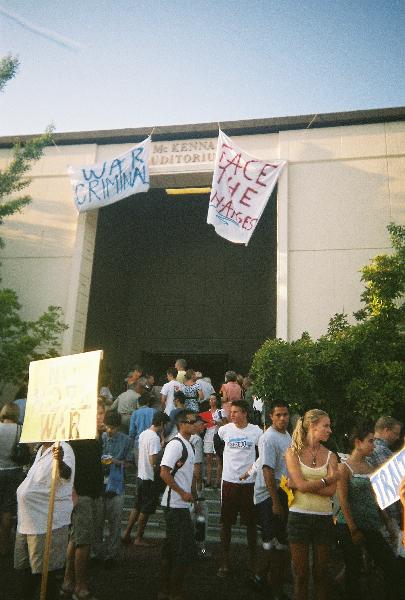 People in America are currently very concerned about education. To George W. Bush’s memorably phrased question—“Is our children learning?”—the overwhelming response, a decade later, is a grim “they aren’t.” From Arne Duncan, making suspect changes to the already unwieldy “race to the top” program, to Bill Gates, admitting recently that school reform was a little harder than he thought it might be, to Amy Chua of “Tiger Mother” fame provoking consternation with her biting critique of parental mollycoddling, American notables are engaged in hair-tearing and lamentation. And, according to polls, many “ordinary” Americans are disturbed by the steady drip of grim educational statistics, taking them as yet another strain to add to the now-pervasive narrative of national decline. Yet, to my mind at least, the current discussion about education is a limited one, because we are talking about it in almost solely market-based terms: i.e., will the next generation remain globally competitive?

I think that there’s a strong case to be made for considering the educational crisis from a political, not just an economic, perspective. American education was started, after all, to produce citizens who could fulfill the task of perpetuating a republic. So it seems reasonable to ask, are students learning values of citizenship, such as engagement, empathy for others, and critical thinking about pressing issues of the day?

If this group lacks such awareness, what does it mean about our current environment and collective future? I’m not an expert on education policy, nor do I have reams of statistics to offer, but I can bring several years of up close observations of college students—and specifically their relationship to politics— to take a step toward exploring those questions.

I attend Pomona College in Southern California, where the weather is warm and the politics are Liberal. The two biggest political events in the past three years were the mass protests when Karl Rove came to speak at a neighboring college, and Election Night 2008. But the Midterm Elections of 2010 did not make the grade for “significant happening”: that award went to a non-political event, the opening of the newest Harry Potter movie, later in the month. Students spent the night of November 2 studying, with the exception of a dozen or so people who turned out for a glum election-watching “party.” The next day, there wasn’t much talk about the new congress. The prevailing attitude seemed to be one of casual dismissal: in the words of my favorite facebook post of November 3, “Well, America, you disappoint me. But at least you’re consistent about it. That brief stint in 2008 was really unnecessary, though. Got my hopes up for nothing. So, in the future, just stay stupid and spare my feelings.”

Of course, college students aren’t known for being stable participants in the public sphere, but the ease from which utter jubilation changed to absolute indifference seems to me troubling. (And this trend didn’t just occur at Pomona: friends from Southern Illinois University, Illinois State University, Washington University and many other colleges described similar situations, though the mass jubilation and mass withdrawal switched years depending on the college’s political leaning.) Self-identifying as Liberal or Conservative, it seems, isn’t consistently adhering to a sacred cause or a system of beliefs. Rather, it’s an entry onto a facebook status that helps round out a self-portrait. Certainly, no obligations come along with this declaration. Voting, the most basic and un-encumbering example of engagement, is not only legally but emotionally voluntary.

None of this, from my not-unbiased perspective, is the fault of college students: most of the people I know who attend college are smart and responsible. I think it’s more persuasive to say that our collective attitude of conditional political participation results from living in an environment in which individual votes—and voices—are largely irrelevant, values are relative and the focus is on private freedom rather than on public responsibility. After all, in a society which emphasizes constructing a unique identity—“being yourself”—above all else, and which offers a wide range of choices by which to form that elusive self, it’s hardly surprising that trafficking in values should become just another consumer activity (the same as, say, deciding whether to spend $15 on Harry Potter 7.1). This is not 1890, when ideological adherence was synonymous with ethnic and social identity and the fulfillment of duties to those groups. It’s 2011, when the free market has atomized society, pluralism has rendered overarching morality nonexistent and individual autonomy reigns supreme as the ultimate social good.

That type of environment, in turn, affects the terms on which people are willing to participate in politics. The fact that people at Pomona responded most strongly to Barack Obama’s election as president and to Karl Rove’s appearance on campus seems to suggest that political participation today depends not on ethnic solidarity or a sense of civic duty as were sometimes present in our past, but rather on emotional stimulation. This lines up with research by philosophers Hubert Dreyfuss and Sean Kelly, who suggest in their new book “All Things Shining” that when people lack shared intellectual assumptions, they turn to emotions for a sense of closeness. Thus moments of intense and shared elevation—found at political rallies, sports events and protests, among other occasions—offer the most meaningful experiences in a pluralistic society. Dreyfuss and Kelly call these experiences of collective emoting “whooshing up.”

That “whooshing up” has become an unspoken determinant of political participation has, I think, two implications. Firstly, it points at least in some degree to the triumph of spontaneous sensation over well-thought conclusions when thinking about politics, even among the echelon of society which is supposed to traffic most in the activities of the mind. This is, needless to say, a dangerously low ground from which to conduct democratic life. Human beings don’t always measure up to the ancient Greeks’ aspiration that reason should triumph over passion in matters of state, but this trend seems to be stacking the decks in the other direction. Secondly, the fact that “whooshing up” determines students’ relationships to politics means that they’re not really thinking critically about politics and its role in our republic at all. Questions like “Why do we orient our lives around production and consumption rather than around political participation?” aren’t just going unanswered, they’re not being asked. If education is supposed to be about, above all, encouraging people to step outside the conventions of their society and examine it with a critical eye, then it seems to have failed when it comes to politics.

Of course, as I’ve mentioned, a crisis of political education is not a popular topic at the moment for obvious reasons. In the midst of a recession, with peoples’ livelihoods actually on the line, who wants to hear about twenty-two year olds lacking the motivation for something as soft-sounding as civic engagement? I think, though, that this crisis is at least equally important in the long term, because the fact that America’s rising generations live lives based largely on individualist, consumerist assumptions and predicated not at all on the participatory art of citizenship has clear implications for our collective future. For, in a nation where economic language (words like “productivity” and “efficiency”) increasingly sets the terms of our everyday existence, the political notion of citizenship provides a crucial counterweight to a dominant value system predicated on radical inequality of outcomes.

Our economy, after all, operates based on the notion that some—often a lucky few— people will, thanks to genes, upbringing and a number of other contingencies over which they have little control, simply be more productive and efficient than others. The notion of citizenship, on the other hand, presupposes the currently less-than-popular, if often cited, ideal that all people are equal, because loving, diligent engagement with one’s surroundings is a possibility for everyone. Regarding one another as citizens reminds us all that we share crucial commonalities as human beings: we are born, can feel pain and humiliation, and will, eventually, die. There are not, to borrow a phrase that Zadie Smith used in a different context, Human Beings 1.0 and 2.0, distinguished from each other by their level of technical productivity. Rather, a common humanity exists, one which encumbers us all with both rights and obligations. But in a nation of civic disengagement—and one in which people are working tirelessly to construct unique selves out of a culture which rewards those who have been more productive and are thus wealthier, with better options for self-construction—the notion of a common humanity tends to fall by the wayside.

Most of my friends, at Pomona and elsewhere, are kind, giving people who feel genuine concern about broader society. Nor does the attitude towards politics I’ve mentioned prevail among everyone I know. But most of my friends and acquaintances’ attitude toward politics do suggest a trend among college-age students in general: that new generations of Americans, however generous or responsible they might be, conceive of their environment in economic and necessarily atomizing terms rather than in political and therefore collective ones. That this process extends and perhaps is exacerbated among our future high-earners and world-shakers, like many of the people at Pomona, is probably the most disturbing element of this trend. The fact that the people who will likely occupy the top of the socio-economic chain—and whose decisions will thus set the terms of most Americans’ existences—have little room for the necessarily leveling notion of citizenship is our most significant and least discussed educational crisis.

Matt Wolfson is a senior politics major and history minor at Pomona College. He studies political philosophy and intellectual and cultural history, with a focus on America. He was the recipient of a Summer Undergraduate Research Grant from Pomona College through which, assisting Professor Susan McWilliams, he researched the political philosophy and formative experiences of the signers of the Declaration of Independence, Articles of Confederation and Constitution. He is currently writing a thesis exploring the ideological origins of the Tea Party movement. A proud midwesterner, Matt hails from Springfield, Illinois.

An Appeal to Millennials: Don’t Waste your Vote on the Lesser...

The Monday Morning Brass Spittoon: Roundtable on the Elections