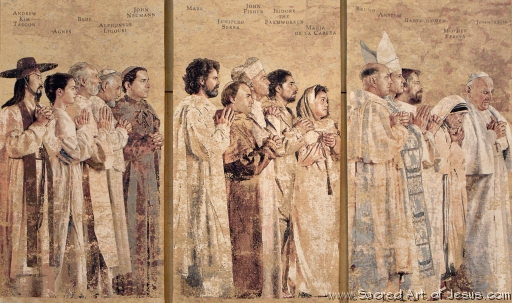 Wendell Berry might well be the patron saint of Front Porch Republic.  Or at least –when we attended FPR’s first conference at Mount Saint Mary’s University in Emmitsburg, Maryland this past September – many of the speakers seemed to want to make their world look as much like Berry’s as possible. That’s not entirely fair: Berry himself would surely tell us suburbanites to “drop our buckets where we are”, and conference speaker Caleb Stegall has said as much as well.  Nonetheless, we can be forgiven for feeling a little sheepish among the agrarians, for we’ve dropped our buckets in Alexandria, Virginia and Bethesda, Maryland — in some ways about as far from Port Royal as you can get.

We’re all for “place, limits, liberty”; that’s why we were at the conference.  But when our friend Patrick Deneen invited us to share our responses to what we heard that day, we found ourselves wanting to face head-on the common critique that our localist views might be merely a nostalgic niche sensibility.  We know the localism expressed at Front Porch Republic is much more: it’s a cultural and political sensibility grounded in love of place, and the particular, and the personal.  But for all sorts of sound prudential reasons, neither of us will ever live that sensibility in a place like Port Royal, nor can we retreat to the land in pursuit of something like Rod Dreher’s “Benedict option”.  While we admire those exemplars of localism, we’d look forward to seeing more reflection on other exemplary ways of living in the Front Porch Republic.  We’d also be interested in further discussion of the mediating institutions that can help build a real sense of place — even within spitting distance of the Beltway.

As Catholics, we think a lot about good exemplars, and we celebrate them in both their particularity and their variety.  We have this great cloud of witnesses—the communion of saints—whose highly differentiated lives all embody patterns of Christian holiness that are each worthy of imitation.   So we pay attention to their lives throughout the year, celebrating the saints on different days and giving some of the most prominent among them feasts.  While Christ is the one true exemplar of holiness, for Catholics there are as many ways to be a saint as there are people prepared to conform themselves to Him.  Often these saints have been nourished by living according to different rules, living in different kinds of places, and receiving their daily bread in different ways – one thinks of Benedictines committed to the land, or mendicant friars who are not, or Jesuits committed to highly mobile missionary work and to local institutions of higher learning — all prominent exemplars who nevertheless participate in the same reality.

In a similar way, we know that most Front Porchers live lives that seek to embody commitments to place and limits and liberty.  But we doubt that many live the same kind of life.  And we’re fairly certain that few live the life of Port Royal.  We don’t think readers should lament that their buckets dropped where they did.  Nor should any of us lament that our lives do not resemble the agrarian charism of Wendell Berry—as important as Berry’s vision is to our own vision of how to cultivate the good life.  Rather, we know that there are FPR readers who live exemplary lives in different kinds of places and in different kinds of ways.  We look forward to learning of exemplars who live in the middle of large cities, or in suburbs; we look forward to hearing from people whose front porches might not be bordered by pastures, but who nevertheless live a kind of localism that we’d all admire.

This leads to our second point.  We’d also look forward to additional reflection on robust mediating institutions and the ends to which they’re ordered.  Here as well we think Catholics have a lot to offer localists. As Front Porchers know, for Catholics, the principles of subsidiarity and solidarity work together – largely through sustained reflection on mediating institutions like the family, the parish, and the school—in ways that benefit places large and small, urban and rural.  For instance, when Pope Benedict has spoken to Italian bishops about the global economic crisis, he’s recognized that “the problem is not only economic, but above all cultural”, and noted that in light of this, “there is a need to recognize and support forcefully and actively the irreplaceable social function of the family, heart of affective and relational life.” Similarly, in Caritas in Veritate the Holy Father discussed the role of local micro-lending practices originating in the Church and their role in helping respond to the global economic crisis.

Even more important than broad statements on these issues, the Catholic Church offers localists the example of mediating institutions not only rooted in place and in time, but also rooted in the sacred: the countless robust parishes that exist in cities and towns and suburbs and rural places across the country.  In such parishes people live and move and have their being, and holiness is rooted in the everyday.  By grounding the holy in a particular place, holiness is made visible in everyday life; by educating the young and helping the needy and supporting families across generations, our rootedness in the place of the parish brings us into solidarity with other families; by living out the call to love God and our neighbor in particular places, parishes can cultivate true communities—even in places like Bethesda and Alexandria.

Recounting his decision to return to St. Francisville, Louisiana, the place of his birth, Rod Dreher recently wrote that “I have been so busy theorizing about constructing an enclave to withstand the battering of the Dark Age barbarians upon us that I did not see, until now, that there is already a place on this earth where I can take my stand, if only I had the wisdom and the humility to see it and to know it and to make it my own once again.”  That rings true to us as well, even if the places we live aren’t much like St. Francisville.  We hope that by living out the discipline of place here where we’ve landed – by raising our families and building our neighborhoods and grounding our lives in our parishes — we can make these places our own for the time that we have been given.

Kim Daniels is a consultant on domestic policy issues, and resides with her family in Bethesda, Maryland.

Chad C. Pecknold, author of Christianity and Politics: A Brief Guide to the History (Cascade, 2010), is a professor of theology at Catholic University of America, and resides with his family in Alexandria, Virginia.