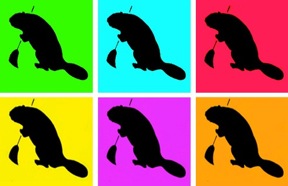 “The greatest thing a human soul ever does in this world is to see something, and tell what he saw in a plain way …”

I do not know William “Beaver” Watkins, supervisor of a bucolic township where broad, green landscapes are interrupted by streets studded with antique shops and churches. But, like all who entered Cambridge, New York, this fall, I came to know Supervisor Beaver through symbols, signs and coupled words. 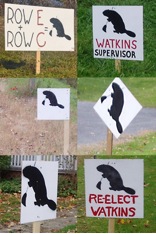 “Symbols are natural spontaneous products. No genius has ever sat down with a pen or a brush in his hand and said: Now I am going to invent a symbol.”

When my wife first saw one of the election signs, she thought it was an ad for a cleaning service: it was kitschy, an inside joke Xeroxed dozens of times in this small town near the Vermont border. She didn’t get it. This specific political signage had a different effect on me. The construct of the symbol pierced my soul, calling forth primal instincts. The sign was Beaver’s creation; it was Beaver. Without a doubt, this was the wildest political campaign sign I’d ever seen, immediately identifiable with a particular person and place.

Beaver’s method was Pop Art churned out with assembly-line efficiency: stark black blots on white plywood cohering to the form of a large beaver holding a broom. Many versions of the signs exhibited lone beaver symbols, absent any words. Other variations riffed on word puzzles. For instance, the beaver image plus “Watkins” equals: “Beaver Watkins.” Nifty.

Myth sage Joseph Campbell believed that for a symbol to effectively transmit meaning it must be understood by both sender and receiver. Locally, the community got the message: It was election time, Beaver was running for town supervisor again, once more on the platform of sweeping away the failed policies of the past. Probably.

Influenced as I was by traces of my own suburban snobbery, I conjured a creation myth of how Beaver summoned forth his art:

A thunderbolt from elsewhere, an ancient impulse from the ground arose in Beaver. The primal urge worked through land and place, worked itself into the man, and Beaver went to work inside a worn cow barn. In a fog of black haze, Beaver and his followers sprayed paint across homemade stencils on white plywood or whatever was available. The incumbent Cambridge supervisor and his friends crafted their assembly-line signage to the twangs of Froggy 107.1, the local country station. Clawing cans of red, white and blue Bud in one hand and black spray paint in the other, they talked big talk. That must have been how it was done. It didn’t matter how it was done; it was done. A political sign was made, a screen-printed beaver holding a broom. Finish sweeping out them good old boys – that’s what this Beaver aimed to do.

“A price has to be paid for anything worth while: to redirect technology so that it serves man instead of destroying him requires primarily an effort of the imagination.”

In the business of political campaigning, calculations are made, budgets are weighed. A war chest is accumulated; Orwellian swag is dangled across websites. Candidates’ eyes sparkle at the stuff their name could brand. Nail files to swing the ladies, showy car magnets for the guys, shiny buttons, cool water bottles, imprinted pens, balloons for children to follow, paper fans to refresh the country fair crowd: people in the know call these vote-getters and volunteer chum “collateral.”

Collateral and swag are gobbled up early, before the real political campaign is engaged, before greater opportunity costs are considered. The bling of the stuff makes candidates beam. Then there’s the signs: proof of vitality for modern suburban and rural campaigning.

What color should they be? Well, white really pops at night. Go with the knockout font. Use upper- and lower-case lettering, allowing the eye in a speeding car to trace the word shape, configure and process the brand and name. Devour the negative space with the letters of the last name, or perhaps the first. The political office ought to be on there, too, not as big, but big enough. Have it clean, no slogan, no party. Skip the doodles and symbols. And: What does color say about me? Am I red or am I blue? Does green communicate in code to the preservationists? These are the endless choices in creating the personal brand.

There are no affordable mass producers of signs nearby. Everyone goes out of state to get a good deal. Orders are handled online, the electronic handshake is executed, and the deal is struck. This assembly of men and machines synergize and produce the demanded product for the consumer. The wire frames used to secure the signs to the ground and build up your candidate are gathered, counted and loaded for delivery. The weatherproofed corrugated plastic signs run through machines to be screened. Pallets, forklifts, plastic ties whirl around and are loaded onto eighteen-wheelers for their destination back here, for the local election.

This is how a political message is produced in homogenous America. This is how most campaigns – regardless of party affiliation or place – are all the same.

“If there is to be a citizenship in the useful and creative sense of the word, it must have its footings in the groups, associations, and localities in which we actually spend our lives.”

Maple Ridge Farm sits back nicely beyond fieldstone-lined walls, announced with handsome signage lit when stars wake, its Victorian architecture toned in shades of syrup is sheltered with blurred berry and gray mosaic slate atop it. Moving past the dominant figure of the residence, weathered barns rusted in color and condition are set against open fields and treed hills. The farm was opened to the public for “Landscapes for Landsake Art Exhibition,” a regional benefit to help purchase development rights from farmers. It was across from here that I first saw the Cambridge election signs.

The Cambridge Valley itself is a landscape exhibition with implied stories; generations of families were born, buried and labored in this scenic land. These New Yorkers have staked their dueling allegiances across this landscape: one parcel lined with the Pop Art animal spirits of Beaver and his pack, another testified to the large-scale sentiments of Andrew Wyeth’s lush American landscapes. No one here ordered lawn signs from another economy, elsewhere, like everywhere else. They made their own with what they got from the local merchants, stuff inherited and unearthed from the soil underfoot and the imaginative soul within.

Positions were taken, sides were drawn, narratives drifted out of the public square into personal affairs to be settled behind November curtains. All would abide by the wishes of the most, choosing one to speak for the membership. After all, somebody had to run “the show” – local-speak for the choruses of chaos rupturing monthly at the town meeting. Decisions had to be made. When would the town hall finally get Internet access? How do we stop that fallen barn from falling into the road? A conductor of “the show” needed to be chosen, and was. The membership cast their lots: 385 to 361. Beaver got himself another two years as Cambridge supervisor. Picture that.