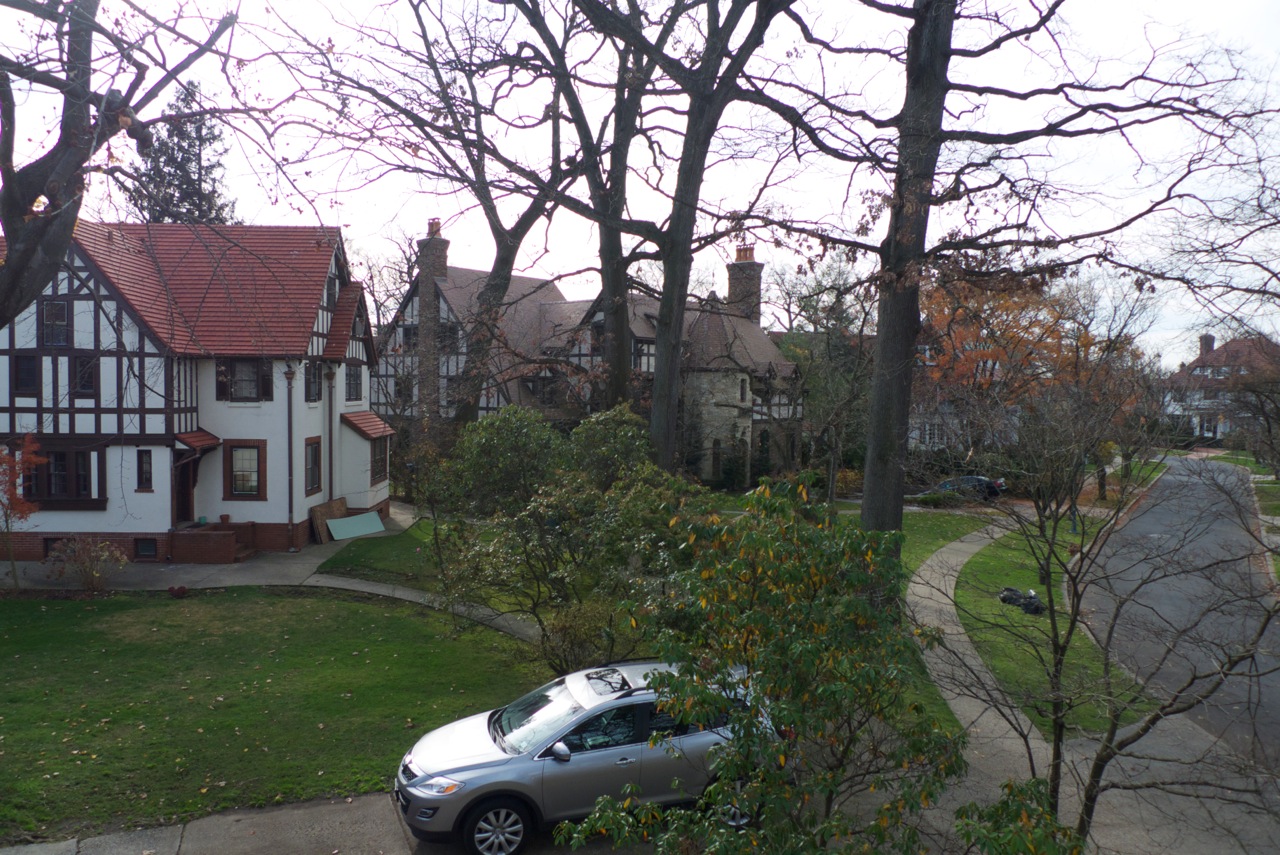 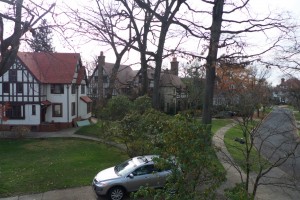 Queens, NY — The idea was to design an English village from scratch, within railroad-commuting distance of Manhattan.  It was meant to include homes for families of different income levels, and so in addition to the big houses, there are apartments in handsome buildings near Station Square, attached townhouses, and two-family houses like the one I live in. Forest Hills Gardens is, as it was designed to be, lovely.  What my great-grandparents bought, in the 1920s, was a piece of the Garden City movement, one of the first attempts at a planned community in America; Station Square was to house a bustling shopping area, and the churches and the public elementary school were put in to round out the community.  All five of the children in my grandmother’s generation went to PS 101, as well as many in my mother’s generation; at family reunions, everyone who went there stands up and recites the Ephebic Oath. You apparently had to learn this by heart when graduating from eighth grade, although the variant my family recites is a bit quirky, and (per my grandmother) has to be said in a very particular, Katherine Hepburn-like mid-Atlantic accent.  It begins something like “We, the graduates of PS 101, upon receiving our diplomas from the City, now affirm our commitment to her;”  and it ends “…and we will strive to transmit the City greater, better, and more beautiful than she was transmitted to us.”

When I take a run towards Forest Park, I pass the church where my grandparents were married; I pass the shrieking kids on the PS 101 schoolyard; and I pass the alley behind the schoolyard where, in the ’60’s, my Uncle David, age eleven or so, once stood guard over a piece of dry ice that had fallen off of a delivery truck and was steaming and foaming in a puddle that had formed in the dip of the road.  He felt that the ice was a public danger, and he was, that year, Captain of the Safeties.  Since then my Uncle David has spent a career as an environmental lawyer fighting GE’s refusal to dredge the Hudson River; when it rains, that puddle still reappears.

Station Square is not any kind of commercial center, although there is a Thai restaurant and a nail salon and a dry cleaner’s, as well as Dirty Pierre’s, a little bar in the pigeon-haunted underpass that defines one edge of the square.  People sit at little tables outside Dirty Pierre’s during every month of the year with their dogs and, in the case of one woman, a parrot; in the winter, the proprietors decorate with a huge inflatable Santa Claus.  But shopping within the Gardens is a nonstarter, if you do not want to buy mixed drinks, French manicures, cold storage for furs, or chicken satay.  Instead I do my shopping at the SS Natural on Austin Street, which is run by Uighurs and patronized by Ukrainian matrons.

Oh, but it’s private.  The NYPD does not patrol: we have a mercenary outfit instead, called Epic Security.  Until just before I was born it was in fact what is politely called a “restricted community;” when, in 1966 or so, my father came to the house to meet the family, my great-grandfather (according to family legend) looked at him and said “So. You’re the Jew.” It is still predominately WASP, but on Saturdays, the Orthodox papas lead their old-world families through the streets as a detour on their way to and from synagogue.

Early last fall, we had what my family has taken to calling the stormado.  It ripped up trees by their roots — huge old oaks that had been planted exactly where the younger Olmstead had wanted them — and sent branches crashing through roofs.  My uncles descended on the house the weekend afterward, delighted at the chance to use chainsaws, and turned the tree that had fallen on our roof into manageable chunks.  I persuaded them to stack these on the front lawn, and put a sign on the stack saying that this was the communal firewood pile for the street; anyone who wanted to get their own windfall wood off their lawn could stack it there, and then take wood from the stack to burn as they needed it.

I was spoken to by a neighbor lady.  “This is not West Virginia,” she said.  “You cannot have a woodpile on the front lawn.” For about five minutes I was angry, embarrassed; I had fantasies of moving to Rego Park in protest.  But she was just telling the truth.  Her family is used to antisocial behavior from mine; her husband told me about one of my uncles storming through his leaf pile, once, forty years ago.  My cousin came by later on to help finish splitting the sections of the tree into firewood in exchange for stabling his motorcycle in the garage for the winter. Now the wood is stacked against the side of the house; after fourteen months of seasoning, it’s just about ready to burn.

FPR is looking for portraits of life in your communities, no matter how plain or quotidian. Want to share one? Just e-mail a photograph of the view from – not of – your front porch to frontporchviews@gmail.com, together with a brief written reflection. Writing may be lightly edited. We’ll gladly withhold your name if you ask us to.