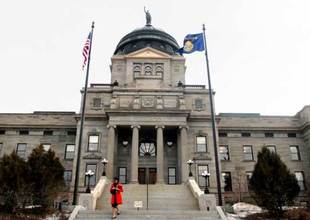 This is the kind of states’ rights I like:

Montana’s Supreme Court has issued a stunning rebuke to the U.S. Supreme Court’s Citizens United decision in 2010 that infamously decreed corporations had constitutional rights to directly spend money on ‘independent expenditures’ in campaigns.

The Montana Court vigorously upheld the state’s right to regulate how corporations can raise and spend money after a secretive Colorado corporation, Western Tradition Partnership, and a Montana sportsman’s group and local businessman sued to overturn a 1912 state law banning direct corporate spending on electoral campaigns.

“Organizations like WTP that act as a conduit for anonymously spending by others represent a threat to the political marketplace,” wrote Mike McGrath, Chief Justice of the Montana Supreme Court, for the majority. “Clearly the impact of unlimited corporate donations creates a dominating impact on the political process and inevitably minimizes the impact of individual citizens”….

The Montana Court then launched into detailed explanations of sufficiently compelling state interests to merit sustaining the century-old law. The majority opinion read like a history lesson that recounting how the state, especially in the decades following its founding in 1889, struggled to restrict the power and influence of mining corporations. In 1906, the citizenry amended the state Constitution to allow for ballot initiatives. Six years later it passed the ban on corporate spending, specifically to curb mining companies based in Butte. The Court noted that the state—then and now—was beset with corporate players whose money, power and influence easily overshadow individuals.

“What was true a century ago is as true today: distant corporate interests mean that corporate dominated campaigns will only work ‘in the essential interest of outsiders with local interests a very secondary consideration,’” the opinion said, quoting a historian’s testimony from a lower state court that reviewed the case. “While specific corporate interests come and go in Montana, they are always present.”

The Court said Montana had a political tradition that has emerged in intervening decades and they wanted Montana to remain a state where candidates run low-budget, personal campaigns and do not rely on anonymous, well-financed messaging from outsiders.

I wish I could believe that this sort of populist and democratic resistance to distant (and distancing!) corporate power was actually a major motivation throughout America’s more rural and western regions–or in other words, I wish it was the case that Wendell Berry and Daniel Kemmis and others like them truly typified the often libertarian, decentralist sensibilities of the America West. Too often, though, that doesn’t seem to be the case; too often, I find that many of my Kansas friends and neighbors tend to believe–wrongly, I think–that cutting school and arts and social service funding, eliminating jobs, rejecting federal supports, and hanging out with supply-siders like Arthur Laffer, is how one gets a “Jeffersonian” revolution. But hell: we have to take what we can get. And in Montana, we’ve been given a gift of a clear and ringing denouncement of a principle that, while perhaps originally grounded in a legitimate consideration of the First Amendment (an amendment which I think is overrated anyway), has grown, with Citizens United, far beyond anything that a free community of citizens ought to accept. And you know–even the dissenting vote on the Montana Supreme Court saw the truth of that:

“While, as a member of this Court, I am bound to follow Citizens United, I do not have to agree with the [U.S.] Supreme Court’s decision,” wrote Justice James C. Nelson, in his dissent. “And, to be absolutely clear, I do not agree with it. For starters, the notion that corporations are disadvantaged in the political realm is unbelievable. Indeed, it has astounded most Americans. The truth is that corporations wield enormous power in Congress and in state legislatures. It is hard to tell where government ends and corporate America begins: the transition is seamless and overlapping….

“While I recognize that this doctrine is firmly entrenched in law, I find the concept entirely offensive. Corporations are artificial creatures of law. As such, they should enjoy only those powers—not constitutional rights, but legislatively-conferred powers—that are concomitant with their legitimate function, that being limited liability investment vehicles for business. Corporations are not persons. Human beings are persons, and it is an affront to the inviolable dignity of our species that courts have created a legal fiction which forces people—human beings—to share fundamental natural rights with soulless creations of government. Worse still, while corporations and human beings share many of the same rights under the law, they clearly are not bound equally to the same codes of good conduct, decency, and morality, and they are not held equally accountable for their sins. Indeed, it is truly ironic that the death penalty and hell are reserved only to natural persons.”

Well said, Montana. I need to get back to Big Sky country more often.