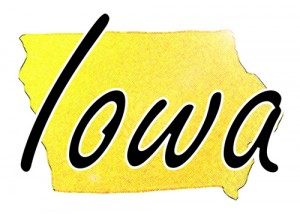 Across the River from Iowa

The Chronicle of Higher Education ran a story recently about the travails of Stephen Bloom, a professor of journalism at the University of Iowa, who, in a piece he wrote for The Atlantic, all but said that Iowans are unfit to participate in presidential elections.

Bloom’s “Observations from 20 Years of Iowa Life,” published just before the Iowa caucuses, begins by noting—with apparent approval—that “Obama catapulted to the top of the Democrats’ dance card when he captured 38 percent of Iowa voters in 2008” and that, “[w]ithout such a strong initial showing in Iowa, Obama might not have been able to steamroll through subsequent state primaries to win the presidency.”

But then, apparently having forgotten how it began, the piece ends on a much different note, a note about “how screwy it is that a place like Iowa gets to choose—before anyone else—who may become the next leader of the free world.” Bloom writes:

I can’t tell you how often over the years I’d be walking [our dog] Hannah in our neighborhood and someone in a pickup would pull over and shout some variation of the following:

“Do much hunting with the bitch?”

“Where you hunt her?”

To me, it summed up Iowa. You’d never get a dog because you might just want to walk with the dog or to throw a ball for her to fetch. No, that’s not a reason to own a dog in Iowa. You get a dog to track and bag animals that you want to stuff, mount, or eat.

That’s the place that may very well determine the next U.S. president.

I think Bloom deserves a full hearing: one does fairly to read the whole essay before joining the chorus of dissenters, which, by the way, includes his university president.

But I don’t think I err in saying that Bloom, though not incapable of affection for his current native state, seems to account it a mark in Iowa’s disfavor that “the graduating classes of most rural high schools are so small that an Iowa tradition calls for silk-screened T-shirts with the names of all classmates on the back,” or that detasseling corn “has become an absolute rite of passage for rural Iowa kids.”

And it does seem to me that Bloom accounts it a mark of approbation that, given what Iowa has become, its “greatest export isn’t corn, soybeans, or pigs; it’s young adults.” “Of the students I teach, writes Bloom, “relatively few will stay in Iowa after they graduate. The net flow of Iowans is out, not in.”

Again: other readers may come to a different conclusion about these remarks. I think the general drift of Bloom’s essay supports my reading of them. And the direction in which the piece generally drifts is this: you’ll find people better suited to choosing the next leader of the free world in states that have larger cities, larger schools, and better work than detasseling corn. Some of the people in those other states are now qualified for such choosing because they have had the good sense to leave places like Iowa.

We’ll see what kind of second stink, if any, arises from the Chronicle piece. It notes that Bloom is visiting for a year at the University of Michigan but that he is defiant about his return to Iowa, notwithstanding a significant backlash to his article in The Atlantic: “Yeah, get used to it,” he says. “I will be back.”

But if there is a stink, I rather hope it issues from this steaming dog pile: “I know Iowa really well,” Bloom has said. “It is my laboratory.”

It is true that Bloom has traveled in and written about Iowa extensively. (I myself have paid some attention to his books and articles, and a year ago I attended a public lecture he gave in Davenport.) But I think rhetoricians might say that claiming to “know Iowa really well” is an example of question-begging. That seems to be what’s currently at issue.

Be that as it may, however, the real problem, at least from my end of the porch, is in the proprietary remark: Iowa “is my laboratory.”

Forget that someone from the coast has come to fly-over country to hold a mirror up to the backward and benighted Midwest. Forget that those actually from Iowa, who have roots in Iowa, whose grandparents and great grandparents live in Iowa, are wondering why they’re being asked to hold hands and sing the nunc dimittis, as if none of them “knows Iowa.” Forget all that.

A home is not a place where, with cool objective detachment, you observe others as they wiggle and squirm under your microscope. It is not in any way—except to its detriment—a laboratory, and certainly not yours. And you don’t get to hand down decisions, invented from afar, about the reasons to own a dog here.

And if you think you may legitimately enjoy the physical benefits of a place—its food, say, or its air or water or sunshine or the goodwill of those around you—while dwelling in the airy regions of judgment above it, you’d better think again. And I think you’d better do so before presuming that you yourself are fit to participate in a national election.

Bonus Feature for those of you disinclined to read the articles cited; or, five passages the Chronicle saw fit to excerpt from Bloom’s piece:

“On the state’s eastern edge lies the Mississippi River, dotted with towns with splendid names like Keokuk, Toolesboro, Fruitland, Muscatine, Montpelier, Buffalo, Sabula, Davenport, Dubuque, and Guttenberg. Each once was a booming city on the swollen banks of the river that long ago opened the middle of America to expansion, civilization, abundance, and prosperity. Not much travels along the muddy and polluted Mississippi these days except rusty-bucket barges of grain and an occasional kayaker circumnavigating garbage, beer cans, and assorted debris. The majestic river that once defined the United States has been rendered commercially irrelevant these days.”
•
“In a perfect world, no way would Iowa ever be considered representative of America, or even a small part of it. Iowa’s not representative of much. There are few minorities, no sizable cities, and the state’s about to lose one of its five seats in the U.S. House because its population is shifting; any growth is negligible. Still, thanks to a host of nonsensical political precedents, whoever wins the Iowa Caucuses in January will very likely have a 50 percent chance of being elected president 11 months later. Go figure.”
•
“In this land, deep within America, on Friday nights it’s not unusual to take a date to a Tractor Pull or to a Combine Demolition Derby (“First they were thrashin’, now they’re CRASHIN’!”). There are few billboards along the washboard-bumpy, blacktop roads that slice through the countryside, only hand-drawn signs advertising sweet corn, cattle, lemonade, or boar semen.”
•
“The bulk of jobs here are low-income ones most Iowans don’t want. Many have simply packed up and left the state (which helps keep the unemployment rate statewide low). Those who stay in rural Iowa are often the elderly waiting to die, those too timid (or lacking in educated [sic]) to peer around the bend for better opportunities, an assortment of waste-toids and meth addicts with pale skin and rotted teeth, or those who quixotically believe, like Little Orphan Annie, that “The sun’ll come out tomorrow.”
•
“They speak English in Iowa. You understand the words fine. … But if you listen closely, though, it’s a wholly different manner of speaking from what folks on either coast are accustomed to. Indoor parking lots are ramps, soda is pop, lollipops are suckers, grocery bags are sacks, weeds are volunteers, miniature golf is putt-putt, supper is never to be confused with dinner, cellars and basements are totally different places, and boys under the age of 16 are commonly referred to as ‘Bud.’ Almost every Iowa house has a mudroom, so you don’t track mud or pig shit into the kitchen or living room, even though the aroma of pig shit is absolutely venerated in Iowa: It’s known to one and all here as ‘the smell of money.'”