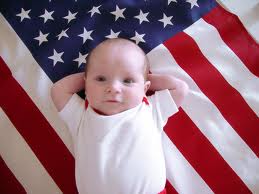 Do you love America? If so, how much? Do you wear an American flag on your lapel (and look askance on those who don’t)? Do you drive only American cars? Do you prefer home-style fries to French fries because, well, isn’t it obvious? Do you support American military operations because to do otherwise would undermine the efforts of those brave men and women who keep us free? Do you take every opportunity to express your belief that America is the best country in the history of the world?

I ask these questions in an attempt to identify an interesting phenomenon and at the same time open a discussion on the propriety of patriotism as well as its limits (assuming such exist). This discussion is especially relevant right now because as the Republican primary season drags on, the leading candidates seem anxious to demonstrate their commitment to American Exceptionalism and all that this entails. For instance, in October, Mitt Romney expressed his belief that God wants America to lead. (Unfortunately, he didn’t footnote his source). Rick Santorum asserts his faith in American Exceptionalism at his website. Newt Gingrich, along with other “conservatives” find it useful to accuse President Obama of not believing in American Exceptionalism, thus suggesting that a belief in American Exceptionalism is a fundamental doctrine in the Republican Party’s statement of faith and to deter from that, or even to appear to deter, is tantamount to heresy and worthy of excommunication. Ron Paul, I should add, seems a bit more nuanced and perhaps even a little uncomfortable speaking in terms of American Exceptionalism. But he is not typical.

Clearly, one way to express a love for one’s country is to assert that it is exceptional, that it is extraordinary. This, of course, is not quite the same as claiming that it is unique, for on some level every country is unique. The rhetoric among the true believers vying for our votes is much stronger than “America is unique place.” But with all this talk of American Exceptionalism and the assumption that those who question this doctrine hate America, it might be useful to consider a few points.

1. Love for a nation must begin with something other than the nation. In this context, it is helpful to recall the words of Edmund Burke:

To be attached to the subdivision, to love the little platoon we belong to in society, is the first principle (the germ as it were) of public affections. It is the first link in the series by which we proceed towards a love to our country and to mankind. The interests of that portion of social arrangement is a trust in the hands of all those who compose it; and as none but bad men would justify it in abuse, none but traitors would barter it away for their own personal advantage.

In other words, love naturally begins with the small, local, and personal and emanates outward from there. To profess a love for a nation without grounding that love (quite literally) in particular places and people that are intimately know, cherished, and stewarded, is to skim along the surface of love as well as responsibility. It is always easier to love an abstraction than to love a neighbor.

2. Consider the following analogy: I love my children. In fact I wouldn’t trade them for any other children in the whole wide world. Yet what if I peppered my discussion of my children with claims that they are the best children in the history of the world? What if I did this when they were around as well as when they weren’t? What if I belligerently insisted on making this claim and was offended if you disagreed? Wouldn’t that give them a strange view of the reality? Wouldn’t you find it annoying? In truth, my love for my children and commitment to them does not depend on my belief that they are the best humans the world has ever seen. True, I am delighted by them (usually) and desire the best for them. Nevertheless, my love does not depend on some notion of exceptionalism even though they are infinitely precious to me.

3. Patriotism is not the same as American Exceptionalism. Patriotism derives from the Latin pater meaning father. Patriotism is a love of the fatherland. It is an affectionate commitment to that which we have inherited. Patriotism is linked closely to the idea of piety, which points us in the direction of fidelity, responsibility, and loving care. The patriot loves with clear eyes, and because of this, can wisely work toward amending the imperfections that inevitably exist.

In a memorable passage, Burke writes the following:

No man should approach [the state] to look into its defects or corruptions but with due caution; that he should never dream of beginning it reformation by its subversion; that he should approach to the faults of the state as to the wounds of a father, with pious awe and trembling solicitude.  By this wise prejudice we are taught to look with horror on those children of their country who are prompt rashly to hack that aged parent in pieces, and put him into the kettle of magicians, in hopes that by their poisonous weeds, and wild incantations, they may regenerate that paternal constitution, and renovate their father’s life.

The American Exceptionalists are the mirror image of the Jacobins, for both willingly blind themselves to reality: the one pretends there are no faults and the other that the faults are fatal. Both fail to treat the state justly.

American Exceptionalism all too often manifests itself in a blind and grating arrogance laced with jingoism. True patriotism, on the other hand, is rooted in a deep sense of gratitude, which gives birth to humility and acts of stewardship. Patriotism loves the good, though inevitably imperfect, gift we have inherited. It works with diligence and affection to improve that which is loved and to pass it on intact and perhaps even improved to the next generation. A patriot is a loving steward, continually mindful of debts to both the past and the future.

This political season, more patriotism would be a welcome (and even exceptional) change.

A Letter from Old Nick to Candidate Santorum

The Rebirth of Conservatism