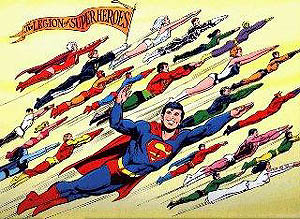 The American appetite for cinematic adaptations of children’s stories about grown men who dress as rodents to save the world from grown men dressed as reptiles is bottomless. The Avengers is already the sixth highest grossing film in North American history, and is all-but-guaranteed to claim the number one box office prize for 2012. Its only potential competition comes from The Amazing Spiderman – the fourth film in the Spiderman series – and The Dark Knight Rises, which if one goes back to Tim Burton’s Batman, released in 1989, is the seventh adult costume party movie in 25 years in which the belle of the ball is a bat.

If one would like to track the simultaneous declines of adult culture and mainstream American film, one can follow these reports and see that, while serious, well-crafted adult dramas such as Rampart and Take Shelter can barely find an open screen, stories of men in face paint attract sizable followings year after year, seemingly with no end in sight. Even the critical sensibilities of Americans who care enough to have them are polluted by the cultural craze of superhero worship. Heath Ledger is remembered for his delightfully campy portrayal of The Joker in The Dark Knight, rather than for his Brandoesque performance in the vastly superior Brokeback Mountain.

At some point, perhaps after Spiderman 14 smashes the box office record set by X-Men 9 or after Hugh Jackman receives an Oscar nomination for his tearful performance as Wolverine in The Claw: Wolverine 4, people may begin to wonder why so many adult Americans are mesmerized by the struggles of people in capes and tights, and why popular American film has changed so dramatically. In the 1970s, the top ten grossing film list included Love Story, MASH, Patton, Ryan’s Daughter, Catch 22, and Five Easy Pieces. Roger Ebert has lamented the state of Hollywood and blamed the shift from the adult to adolescent market, along with the increasing popularity of home entertainment, for what he called “sequel madness and unoriginality in Hollywood.”

The surge in the power of the teenager and the mind-numbing worship of the teenager in American life is surely to blame. Ebert is correct, but only in part. If only pre-teens and adolescents flocked to comic book films, the story would end with Ebert’s interpretation. The grim reality of adults loving superhero movies complicates the narrative. For the answer to this complication, one must turn to one of the greatest living American authors, Gore Vidal. In 1963, Vidal wrote an essay for Esquire Magazine, “Tarzan Revisited.” Vidal writes about the Edgar Rice Burroughs books he loved as a child after rereading them as an adult, and in the process of his contemplative review, he offers some conclusions about adult interest in children’s stories that, sadly, gain relevance with each passing year.

Vidal begins by wondering, “How many adults have an adventure serial running in their heads?” He goes on to elaborate in his characteristic brilliance and acerbic wit:

How many consciously daydream, turning on a story in which the dreamer ceases to be an employee of IBM and becomes a handsome demigod moving through splendid places, saving maidens from monsters (or monsters from maidens: this is a jaded time). Most children tell themselves stories in which they figure as powerful figures, enjoying the pleasures not only of the adult world as they conceive it but of a world of wonders unlike dull reality. Although this sort of Mittyesque daydreaming is supposed to cease in maturity, I suggest that more adults than we suspect are dazedly wandering about with a full Technicolor extravaganza going on in their heads.

Vidal considers the enduring popularity of Tarzan, the emergence of James Bond, and what he perceived as the childlike fascinations of American adults (little did he know what would capture the collective imagination in 2012).  He reflects upon what he witnesses in his culture:

Until recently I assumed that most people were like myself: daydreaming ceases when the real world becomes interesting and reasonably manageable. Now I am not so certain. The life and success of Burroughs lead one to believe that a good many people find their lives so unsatisfactory that they go right on year after year telling themselves stories in which they are able to dominate their environment in a way that is not possible in the overorganized society.

As an adult and author, Vidal was able to evaluate Burroughs with a new degree of sophistication. He determines that Burroughs “cannot reproduce human speech” and is “often redundant,” but that he did have a rare gift – “he can describe action vividly.” To those who have not read any Tarzan stories, the essay is most insightful at the conclusion.

From Plato’s Republic to Opar to Bondland, at every level, the human imagination has tried to imagine something better for itself than the existing society. Man left Eden when he got up off all fours, endowing his descendants with nostalgia as well as chronic backache. Since the individual’s desire to dominate his environment is not a desirable trait in a society that every day grows more and more confining, the average man must take to daydreaming. James Bond and Tarzan are dream selves, and the aim of each is to establish personal primacy in a world that, more and more, diminishes the individual. Among adults, the current popularity of these lively fictions strikes me as a most significant and unbearably sad phenomenon.

The unbearable sadness of the phenomenon that Vidal accurately delineated as daydreaming grows in intensity when one considers not only the popularity of comic book movies, but also of video games. Video games are the ultimate day dreaming medium, because the dreamer is an active participant rather than a passive observer. With the manic pushing of buttons, the IBM employee that Vidal imagined is no longer the occupant of a cubicle for eight hours a day, but a medieval assassin, legendary NFL quarterback, or Herculean dragon slayer. The exact nature of the fantasy is less important than the existence of the fantasy itself. The fantasies increase, and Hollywood and video game creators become more adept at facilitating those lucrative fantasies, as personal boredom and societal confinement increase.

Rapid advancements in technology and the uncontested dominance of liberal democracy in Western culture supposedly create conditions for the enjoyment of unprecedented freedom. It is still fair to ask, however, how much of that “freedom” is limited by the very same order that creates it? To paraphrase songwriter John Mellencamp, “what ugly truths does freedom bring?”

Derrida’s contention was that people have the freedom to choose their role, but lack an authentic freedom to forge their own identity. Writing 32 years after the publication of Vidal’s essay, “Tarzan Revisited”, Derrida brilliantly defines Vidal’s useful phrase, “overorganized society.”

In an “overorganized society”, people are free to choose the role they fill in a prescribed life. Social forces of conformity, economic demands – enhanced during our Little Depression – and the limited path to career availability, lead people through a process they can predict from the early years of childhood. Most middle-class Americans now study a trade in college, and following graduation, work in that trade for the rest of their lives. Technology makes life more convenient, and it does allow a form of control over a person’s environment. That control, however, is detached from the emotional intensity of living that is available and possible. The “persona” and “character” that Derrida identifies as replacing the “person” becomes even more important and inevitable to people when they manage their lives through social networks, and now the social network character has become increasingly confined by the pressures of employment and higher education. More and more employers and universities are monitoring the Facebook pages of their workers and students.

The result becomes a life in which time is overly managed – time divided between work and non-work responsibilities and leisure under the threat of the cell phone; the cell phone can always hold the user hostage with the reemergence of responsibilities, and a life in which one has to constantly calculate, what sociologist Erving Goffman called, “the presentation of self in everyday life.”

The escape from an overorganized society and an overly managed life could and should be the pursuit of creative activities that provide autonomy and individuality. The arts, crafts, and even some trades, such as cooking, allow people to claim a small piece of territory for self-ownership. Time spent creating, rather than consuming, is time spent controlling, rather than being controlled.

The problem with music, literature, scholarship, comedy, craftsmanship, cooking, etc., is that they require time, effort, and energy. To put it simply, they require work. Learning to play an instrument is difficult. It’s much easier to master Guitar Hero. Writing a good book is a challenge – much easier to just start a blog. Studying a topic of interest takes a lot of time. It’s easier to just watch a couple of YouTube videos.

Creativity is the escape hatch that the soul demands from societal confinement, but American culture discourages creativity. Instead it offers consumption. Consumption can be fun, and it is always easy. Technology continually makes it easier – click a button for a song, type in a web address for a movie, and so on and so forth until you get your fix.

The ideology of consumer capitalism preaches instant gratification, reward without work, and effortless pleasure as ultimate virtues, and it seems that most people bow at the altar and accept the doctrine. Unwilling to put in the work that adult culture and creativity require, people are then left with the frivolous consolations of consumption, and they are left to daydream. The daydreams become more far-fetched, extravagant, and fantastical as the daydreamers feel more tightly trapped.

It is a phenomenon just as “unbearably sad” as when Gore Vidal first diagnosed it 49 years ago.

David Masciotra is the author of Working On a Dream: The Progressive Political Vision of Bruce Springsteen (Continuum Books). For more information visit www.davidmasciotra.com