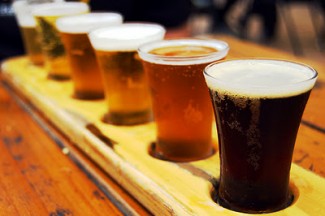 In his estimable history of distributism and its major figures, Jobs of Our Own, Australian economist and former MP Race Matthews records an account of the distinctive atmosphere of the Distributist League meetings in the late 1920s:

“The formal business of the League was followed by after-meetings in the general bar of the Devereux, where an account by one of the members describes pint pots banging on the tables and members ‘shouting texts of St. Thomas at each other, calling on the people of England for the overthrow of their taskmasters, and a return to the religion of their forefathers.’

There was also much singing. ‘I have always, writes Titterton, ‘regarded this singing as an essential part of Distributism.’”

Despite the enthusiasm of adherents like the worthy Titterton, some latter-day observers have found entirely too much singing and pot-banging amidst this group and not enough real action—a criticism which fairly applies to the otherwise brilliant career of one Gilbert Chesterton, entirely a man of ideas, if less so to his more bellicose comrade Hilaire Belloc who at least served, somewhat unhappily, as a member of Parliament.

Still, it is hard not to favor a group whose agenda somehow found room for tavern meetings and singing. And in this delightful collection of eighteen short articles edited by the Distributist Review’s Richard Aleman, the profoundly sane and humanistic nature of this movement manqué comes through quite plainly.

Take Dr. William Fahey’s faux-Bellocian dialogue, “Toward a Description of Distributism,” in which the personages Scriptor and Lector banter amusingly (Lector: “Wait a minute, Distributism has as its founder a Roman Pope?” Scriptor: “Is there another kind?”), amidst serious reflections such as this “catena of Mr. Belloc”:

“I propose no general scheme for restoring freedom and property…the restoration of property must be essentially the product of a new mood, not a new scheme…

“Restoration of property…could never approach mechanical perfection. We are only attempting to change the general tone of society and restore property as a commonly present, not universal, institution.

“Property being a personal and human institution, normal to man, will always be, and must be, diversified.”

To which Fahey’s Scriptor adds, “Does this, dear reader, sound like a man about to propose state control of everything financial?”

By contrast, the tone of John Medaille’s “A Distributist Banking System” is not jocular but his five pages here display his customary brilliance as he comments on the links between money and community, how a distributist money supply would work and why usury and monopoly are examples of bad morals and bad economics.

Joseph Pearce’s essay recalls what is perhaps E. F. Schumacher’s most lasting legacy: his demonstration (in Small is Beautiful and other writings) that the Catholic principle of subsidiarity has found worldwide popular appeal, and that it is a practical and viable alternative to laissez-faire concepts of economics.

Before reading this anthology, I was not familiar with the French author Philippe Maxence whose article “The Common Good” contains these excellent sentences: “Thus, the power of distributism: the purpose of society and hence of man, is not primarily the production of wealth or collective servitude. It is about allowing men to achieve their purpose, to live in political camaraderie, to practice the virtues, and to achieve happiness and contemplation…” Maxence has written a book on Chesterton and is the editor-in-chief of the French Catholic newspaper, L’Homme Nouveau.

For those interested in the specifically Catholic dimension of distributism, Mark and Louise Zwick (of Houston’s remarkable Casa Juan Diego, a Catholic Worker house) note the links between Prince Kropotkin, Peter Maurin and Dorothy Day. The Zwicks note  that “Kropotkin’s Fields, Factories and Workshops (perhaps in anticipation of books like Shop Class as Soulcraft?) introduced Maurin to another idea that appeared in the Worker movement—that the intellectual could find in manual labor, especially in intensive gardening and fine craft work, an enriching dimension to intellectual work.”

Other contributions: Ryan Grant on the distributist approach to education (which would involve homeschooling cooperatives), Race Matthews looking forward to the model of Spain’s Mondragon Corporation, the largest cooperative enterprise in the world, Bill Powell’s piece on creating your own backyard forest garden, and Phillip Blond’s call for both the state and the market to once more be subservient to a renewed civil association.

I don’t want to close without noting both Dale Ahlquist’s beautifully philosophical introduction and Richard Aleman’s pragmatically minded final essay. When so little light is generated in most of American letters and social thought today,  groups like the American Chesterton Society and its cousin website, the Distributist Review do a great service. This anthology is a shining example of that.