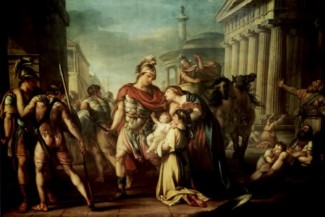 One of the most memorable passages in the Iliad occurs in Book 22, during the climactic scene when Achilles is chasing Hector around the walls of Troy.  As Achilles closes in on his great foe, intent to finally have his revenge for the death of his dear friend Patroclus, the narrator calls attention to a detail which, on first reading, could not appear more irrelevant.  The passage reads as follows in the Lattimore translation:

Always away from under the wall and along the wagon-way

And came to the two sweet-running well springs.  There there are double

Springs of water that jet up, the springs of whirling Skamandros.

of it rises as if from a fire that was burning inside it.

Or chill snow or ice that forms from water.  Beside these

In this place, and close to them, are the washing-hollows

Of stone, magnificent, where the wives of the Trojans and their lovely

Daughters washed the clothes to shining, in the old days

When there was peace, before the coming of the sons of the Achaians.

The mention of the Trojan women’s laundry at this point in the story—at the point when the story of the two great heroes has just reached its intense denouement—strikes one, on an initial reading, as a jarring digression and an obvious error on the part of the poet.  Yet it quickly becomes clear, as one reflects a bit on the passage, how skillful the inclusion of this detail really is, and how deeply relevant to the actions being narrated.  For besides powerfully juxtaposing the misery of war against a background of peaceful existence, as is performed in the last lines quoted here (“in the old days / When there was peace, before the coming of the sons of the Achaians), the reference to the Trojan women undertaking their daily tasks reminds us of all that Hector stands to lose in his impending battle with the unmatchable Greek warrior.  It is not only the momentous joys of life that he must sacrifice—the acclaim of his people or the satisfaction of watching his son grow into a valiant warrior himself—but the minute and quotidian pleasures as well, the simple serenity of meandering along the old wagon-way, and observing the local women at their sociable chores.  What Hector stands to lose is everything, the totality of life, with all of its fantastic triumphs, yes, but also, all of its commonplace delights.  The detail of the laundry serves to remind us that the cost of heroic sacrifice, the tally of all that one surrenders with one’s life, lies perfectly beyond calculation and comprehension, and this serves to emphasize, in an entirely unique manner, one of the great themes of Homer’s whole story.

This technique of meaningful digression can be one of the most impressive devices in the repertoire of a narrative author.  I think, for instance, of that passage in the Laxdaela saga, just prior to the climactic death of the hero Kjartan, when the narrator mentions the farmer Thorkel observing the battle as it is about to commence.  A character who has played no role in the action to this point, Thorkel’s appearance seems oddly out of place; in fact, it offers the narrator the chance to reiterate one of the saga’s primary themes, when Thorkel rebukes his shepherd boy, who wants to run and warn Kjartan, by exclaiming, “Hold your tongue!  Are you so stupid as to think you can save someone’s life if he is fated to die?”  Reading such passages, we are jolted momentarily by the apparent incongruity of the details raised by the author, but this jolt can produce a state of unusual awareness in us too.  In this state, the realization of the profound thematic continuities between the digression and the larger plot will fall upon us strongly, carrying home the story’s significance to our hearts and our minds in a whole new way, a way that is at once subtle and impressive. We feel a sense of awesome revelations disclosed to us through ordinary things, that sense which constitutes so much of the pleasure in the poetry of Wordsworth.  Such moments of insight are among the most important features of fictional literature, and their significance merits some consideration here.

What strikes one, at the most basic level, upon reading Homer’s description of the springs at the Scamander is the unity being revealed between the drama of the military conflict and the mundaneness of the household duty, the sudden realization that Hector falling before the spear of Achilles and the Trojan women washing their laundry in more halcyon days are both part of one and the same story.  Simply by weaving these two things together into his narrative, simply by mentioning them side by side, the poet has reminded us that these immensely disparate experiences belong, in fact, to the same world.  He has confirmed our primal intuition that the world, and our place in it, may be grasped as a unified whole, and that consequently, it is subsumable under a consistent and comprehensive understanding.

It is this intuition that impels every religion and every metaphysical system that ever was.  Every religion and every metaphysics—the one primarily through symbolic networks, the other through consecutive and systematic argument—attempts to provide that unified understanding intimated by the passage in Homer. Yet whether or not such an enterprise even seems meaningful in the first place depends crucially on whether or not we are convinced that such an understanding is to be found—depends, that is, on whether or not we really do believe our lives, for all of their almost infinite variety, do belong to the same overarching narrative.  The examples of meaningful digression I have adduced here serve to demonstrate the way that fictional literature can preserve and nourish this elemental belief.

Moreover, if intellectual history teaches us anything, it is that religions and philosophical systems are subject to the same processes of rise and fall as men and empires.  The symbols of religious dogma lose their purchase on men’s imaginations; the arguments of metaphysical inquiry lose their persuasive force.  Periods that witness such spiritual declines become marked by a profound skepticism; the prevalent theological and philosophical explanations of the world’s unity no longer satisfy the mind, and men come slowly to believe that no such understandings of any sort are valid.  From the weakness of the answers they deduce the meaninglessness of the question; from the failure of their current systems they conclude the non-viability of any system.

At such periods, the contribution which the literary arts have to make to the spiritual and intellectual health of society is immense.  For rather than insisting on the true form of any particular understanding of life’s unity, a well-wrought story merely insists on the unity itself, prior to any of its theoretical or symbolic elucidations.  Homer does not explain to us how the story of Hector’s defeat and the story of the Trojan women’s laundry are connected; he simply shows to us that connection.  He does not assert any theoretical understanding of life’s unity; he merely displays it to us.  Sir Philip Sidney’s dictum that “the poet nothing affirms, and therefore never lieth” is operative here.  Since nothing is being asserted, there is no occasion for doubt or disagreement.  The poet only points out to us a simple but sublime fact, a truth prior to all of our theoretical inquiries.  On the final nature of this unity indicated, he remains largely inarticulate.  But that silence is his strength, as it tends to preserve our conviction in the unity itself, and thus to preserve us from any total skepticism.

I think it is fair to say that the modern period has been a period of total skepticism, a period when the symbols of the Christian religion lost their purchase on the imagination of a very large portion of the educated public, when the traditional metaphysical frameworks ceased to compel the assent of most intellectuals, and were replaced with various anti-philosophies like positivism and deconstruction.  We do well to remind ourselves that the form this skepticism takes is not just a rejection of the various understandings of the world’s unity on offer, nor even the rejection of the possibility of a satisfactory understanding, but the more obstinate conviction that the desire for such an understanding is pointless and insignificant, that our intuition of the world’s unity is fundamentally delusive.  The skepticism of our age is not primarily a matter of disbelief in certain systems of thought, but the attrition of a crucial intellectual instinct.  The unity of being, which is there for all to see, is not seen by the modern mind, and thus the modern thinker takes the whole range of religious and metaphysical inquiries to be not so much erroneous, as superfluous.

I have written previously here at Front Porch Republic about the necessary role which the revival of literature, and poetry especially, must play in any restoration of our cultural health.  I make the point again.   Our spiritual ills stem from a thorough erosion of our rational natures, of the pre-conceptual orientation of our minds towards truth and beauty.  Our task now is not to discover new and compelling arguments; our task is to cultivate that nature again, in such a way to make it vital and efficacious in our civic life.  Only poetry tends to our natures at this depth, and consequently, it is only poetry that can save us now.