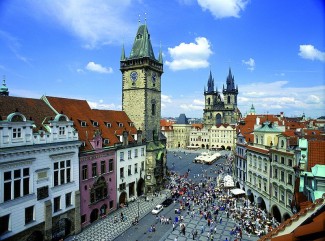 This excerpt is the second in a three-part series from Eric Jacobsen’s book, The Space Between. Read Part I here.

The built environment plays an important role in this dynamic process of space becoming place. I’ve already introduced this topic in our discussion of placelessness. As has been mentioned, certain kinds of environments are conducive to placemaking, and other environments seem to resist this process. If place is to play a role in our redemption, we need to give some thought to the potential for placemaking in the settings we construct as well as the set- tings we inhabit.

The thing that placeless environments fail to provide—that placemaking quality—can be described as town fabric. Daniel Solomon, in his book Global City Blues, breaks down town fabric to its three essential functions. According to Solomon, town fabric

Each of these functions plays a key role in the making of place. We will deal with them in reverse order.

Obviously, when we speak about the built environment, we are mostly talking about buildings. And there are a lot of important things that we could say about buildings. However, as we have already noted, the problem is that if we focus too much on buildings, we fail to see the space between the buildings. And it is important that we notice the space between the buildings because it is here where some of the more interesting things in life are likely to happen.

With regard to the space between the buildings, we can identify two fundamentally different ways of assembling buildings.

Because this seems so natural when one is experiencing such a place, it can be easier to see when we adjust the scale and our perspective a bit. This image of Legoland allows us to see carved space in a more recognizable form.

The desired outcome that carved space allows the town fabric to achieve is called enclosure. Enclosure provides a sense of protection, and it deﬁnes the space in pleasing ways. A sense of enclosure makes us feel more comfortable both when we are moving and when we are stationary.

The majority of buildings constructed in the second half of the twentieth century are guilty of leaking space. There are three primary reasons for this. The ﬁrst is simply a failure on the part of architects and city planners to understand and appreciate the concept of enclosure. This is in part due to an antiurban bias embedded in our institutions.  Most municipal zoning codes require buildings to meet a minimum setback from the street, and they restrict building heights in many cases to a single story. These types of regulations are based on the idea that people would rather be in a rural or small-town setting, where one does not feel crowded by tall buildings.

Of course, most of the churches constructed during this period have followed suit and have provided more than enough parking spaces for everyone of legal driving age to have a parking space. It is not enough to simply have ample spaces for a normal Sunday morning; they must provide ample space for parking even on Easter Sunday. This means that for six days of the week, the parking lot is virtually empty, and on Sunday it is only half empty.

A ﬁnal reason for leaking space has to do with streets that are overly wide. As we noted in the previous chapter, one of the primary goals of city planning during the second half of the twentieth century has not been to create pleasing settings for human interaction, but rather to facilitate the easy movement of automobiles. This goal has often been made manifest in continuing to add as many lanes for traffic as possible. It is not unusual in some cities to see as many as eight lanes of traffic right in the middle of town.

Once we begin to understand the idea of enclosure, we can break this idea further into at least two common spatial tropes. Within a coherent town fabric, we can expect to experience what can be called outdoor hallways and outdoor rooms. In this sense, we can understand a city to be very much like a house with its roof taken off.

The streets of a city with coherent town fabric should feel like hallways. This trope helps us feel more comfortable moving through the city by allowing our eyes to see our destination and by naturally guiding the movement of our bodies.

The plazas and squares of a city should feel like outdoor rooms. This spatial trope helps us feel more comfortable remaining stationary in the urban environment by providing a sense of shelter.

An awareness of the concept of enclosure and of the spatial tropes of out-door hallways and rooms allows our eyes to see more than just the individual buildings within the built environment. We begin by seeing these distinct forms. But then we begin to see some of the detail within these forms.

One detail we can notice is called streetwall. The walls of buildings that form the town fabric work together to form a single streetwall. The buildings don’t need to be the same height or of the same period or style, but if their fronts are at the same depth and they are parallel to the street, we have a streetwall. A good streetwall is a pleasing collage of textures, colors, and moods.

Eric O. Jacobsen, The Space Between: A Christian Engagement with the Built Environment, Baker Academic, a division of Baker Publishing Group, ©2012.

Used by permission. All rights to this material are reserved. Material is not to be reproduced, scanned, copied, or distributed in any printed or electronic form without written permission from Baker Publishing Group.