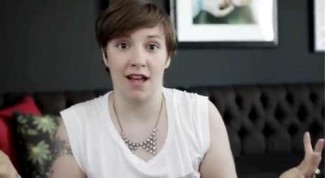 Yes, yes. I know the election is over and, as a third-party voter myself, I don’t believe I’ll smell like sour grapes here regarding the results, but still there’s something about that Obama video. It’s the one where actress Lena Dunham compares her first voting experience to losing her virginity. “Your first time shouldn’t be with just anybody,” says Dunham, and the political ad targeting the college-age voter, presumably female, goes on, and on, and on.

The older I get the more I think the best insights into the important parts of life are gained from looking at things through the lens of contraction rather than expansion. In other words, instead of looking at concrete, mechanistic, tangible, manipulable, supposedly real and primal ‘building blocks’ as being prior, and more important, than the larger, less mechanistic, more fluid, more poetic ideas or substances, I see the reverse. I’ve learned to see what normally goes by the name of progress as ‘a fall:’ a dimming, hardening, shriveling, and ossification of a prior, robust, living reality. The Big Bang, in this way of looking at the world, gets us thinking in the wrong direction, philosophically, and is probably a big bust scientifically as well.

‘Jobs’ talk, therefore, as an example of this way of thinking, is ‘the fall’ of ‘vocation’ or ‘a calling.’ It’s an ossification, collapse and dimming of a much larger reality. And, generally speaking, as a kind of law with all of this, when the larger reality gets collapsed, reduced or hardened into the smaller because of its ‘fall,’ the smaller reality collapses itself.  When ‘vocation’ collapses into ‘jobs,’ we lose the sense of a ‘calling’ and, eventually, we can’t even provide ‘jobs.’

But back to that Obama video. It seems to me to exemplify ‘the fall’ of at least three important realities, the collapse of which have many of our young scratching their head with confusion, and a experiencing lot of hangover-type pain. We put all of our faith in these collapsed remains and, no matter how much we try to squeeze life out of them, they just don’t, (because they can’t), deliver on the impossible demand made upon them.

SEX IS THE FALL OF EROS:  The first example of ‘the fall’ in the video is the typical view of sex it exemplifies. The implicit assumption here is the one of emergent evolution whereby the sex-instinct is the underlying reality and love is, what Owen Barfield calls a “late-come embroidery on it.” Sex is, for Lena Dunham in the video, obviously the central thing but at the same time almost unremarkable. The truth is, however, that Eros is, or should be, everywhere and sex should be its sacrament or flowering.  Eros is ideally that which connects people with nature.  It should be what gives us love of our place as well as passion in our calling.

Sadly, however, through its fall into just ‘sex,’ it aids in hypermobility and rootlessness as people run from the scenes and places of bad sexual relationships. And work, because of its increasingly mechanical and repetitive nature, as well as its apparent purposelessness, creates more nervous tension for which the relief is, yep, more sex. The cycle goes on. “For many people in a technological society,” says Orthodox theologian Olivier Clement, “the only real bit of nature they are ever going to encounter is the body of another person.” So sex itself collapses under and impossible demand made upon it.  As writer Marc Gafni says, “The modern zeitgeist has slain all the gods save Aphrodite, the Goddess of sexual love. Yet she cannot survive alone.”

THE VOTE IS THE FALL OF POLITICS:  In the video, Dunham compares voting for the first time to having sex for the first time, not in order to stress its smell of death or highlight its relative insignificance, but actually to make a case for its central importance!  Countless people have made this case better than I can here but, contra Dunham, the vote should be, in many respects, the least significant act of a citizen who has a robust engagement with politics and with all that has traditionally gone along with civic virtue.

What this context adds to that diagnosis is simply to suggest that the vote could be the flowering or ‘sacrament’ of a healthy political life but when it’s not, and it’s actually the dried-husk remains of the ossification of citizenship, it actually collapses itself.  Substitute, if you will, the word “voted” for something sexual like “got some” in any statement about hook-ups and you’ll see that it also rings true:  “I finally voted but I’m just as depressed, lonely and confused as I was yesterday.” Lacking a larger view of political life, voting, despite the hype, reeks of death.  For many people, the same bad taste could have been their mouth’s companion on the morning on November 7th if, instead of voting, they had picked up some dead leaves and had given them a good chew.

THE FALL OF LITERACY:   In a much less direct way, the video also takes for granted and seems to relish in what I would call the fall of literacy.   Though nowadays, partly as a result of testing and partly as a result of lowest-common-denominator schooling in general, literacy means to most people the simple ability to free words from a page, (or, more normally, a screen), using the tools of a phonetic alphabet.  Literacy, however, used to have many more connotations than that.  In A Is for Ox:  The Collapse of Literacy and the Rise of Violence in an Electronic Age and other books, Barry Sanders, provides a rich history of literacy, (and its collapse, or ‘fall’), that shows how literacy used to connote a robust inwardness and inner life.  It involved mother love and mother’s stories, intersubjectivity and introspection.  As literates in this larger sense, we could look inward and see our life as a story with a past, present and a future.  Sanders contrasts this robust literacy with the case of ‘wild boy’ (feral child) Kaspar Hauser, who showed up inNuremberg in 1828.  He lacked the ability to express himself with more than grunts and groans, and he even lacked a name, Kaspar Hauser being a name given to him later.  Despite later being taught Latin and Greek, Hauser never gained an integrated sense of himself or a satisfactory inner life.  Lena Dunham seems to be seeking to appeal to just such empty, unintegrated ‘literates.’

The fall of literacy mirrors the fall of politics which mirrors the fall of eros.  The worldview espoused in the video which was targeted towards college students is an insult to their intelligence as, in its primitiveness and festishization of fallen realities, it seems to address the college-aged as being closer to feral children than fully realized humans.   Not to worry, though. The sky is darkest right before the dawn. In placing these dark realities in the context of ‘the fall’ there are implicit echoes of the ideas of ‘redemption’ and ‘resurrection.’ In other words, the future is not all in our hands. And any of us who works with young people know there is interest and hope in cooperating in the great work of the redemption of literacy, of politics, of eros. The first step, however, is to pronounce dead things dead, and I think that’s beginning. With a bit of faith and a lot of hard work, the future is bright indeed.