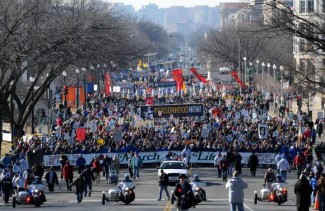 “Perhaps the truth depends on a walk around the lake.”  —Wallace Stevens

January 25,  the 40th anniversary of Roe v. Wade, will mark the fifth time in the last decade that I’ve travelled to D.C. for the annual March for Life.    The first trips I undertook mostly as a part of my job in campus ministry.  It became an easy ‘program’ to put out there for the students in my early years on the campus.  The ever-generous Knights of Columbus make it such that it does not cost the co-eds much to travel there via overnight motor coach, and, as a bonus, they usually screen classic Catholic movies on the bus that I, for one, haven’t seen since grammar school.   I’ve found it cute how the college students at first suffer, then take to, such classics as The Bells of St. Mary’s, Joan of Arc, and Goodbye, Mr. Chips.   A bond is shared between the generations on the bus that would be hard to produce if the students were not trapped in a seat at 2:00 AM on the Pennsylvania Turnpike, headed for D.C with nothing else to do.

The first few trips were eye-openers, and I was struck mostly by the political:  There were pictures of babies in utero flashed on a large screen during a homily at the National Shrine of the Immaculate Conception (not my personal style); loudspeakers everywhere around the Mall broadcasting a variety of messages; and there were different, ghastly, unspeakable pictures carried by many in the March as posters.  I told the students it all was an object lesson in the ‘strange bedfellows’ aspect of politics, albeit in this case it involved some really, really strange bedfellows!

The talent that a Tolstoy, Stendhal, or Crane brought to writing battle scenes would have to be invoked to capture some of the first-person perspective atmosphere of confusion and chaos in this ostensibly well-organized event.  There’s always a mass of humanity, (400,000+), and often we don’t know if we’ve started ‘marching’ or not, where the center of action is, where it ends, who’s in charge, etc.  One year, a pro-choice journalism student of some kind tried to punk me by sticking a microphone in my face and asking me about some provisions of current federal laws surrounding abortion in order to get me on tape sounding like an ignoramus.  (Full disclosure: she got me on tape sounding like an ignoramus.)  The students and I tried to process exactly what we were doing there and, out of desperation to make sense of it, we settled in on some humor about the number of babies we were saving with every step we took.

Now, I’m not trying to downplay the political.  Far from it!   It has my support.  However, in subsequent trips, I have been increasingly taken by the poetical element that exists in this annual January event.  Each year I attend I personally feel less and less optimistic regarding the cause.  On the other hand, each year I get more and more hopeful.  In fact, the theme of hope is woven throughout this mid-winter event, at least for those with eyes to see.  Despite, or possibly because of, the generally cold and overcast weather that usually greets the marchers, the virtue of hope positively shines!

I’ve come to recognize and even relish, with my very limited poetic sensibilities, the day and time of year that marks the anniversary of Roe v. Wade.   Though it’s true that in mid-winter the outside world can seem depressing and devoid of life, mystics and those expert in the inward journey claim that there are new energies springing up in the soul in this annual time-after-Christmas.  And nature poets have helped us ‘ponder dormancy’ to see that this time of year is not devoid of life at all.  Instead, they teach us to reverence the stars that are working on the soil for next year’s growth, and they remind us to think of, and even sense, the seeds beneath the soil as already embarking upon those first, almost imperceptible, stirrings that will become Spring’s visible shoots of life.   The feast of Candlemas on Feb 2 echoes this seasonal theme as well, as the light of Spring, planted at the Incarnation, becomes, at last, dimly perceptible.  The celebration points to the continued expansion and growth of this light, and its dominant theme is hope.

In a similar vein, Conventry Patmore, an expert on the related ‘hopeful’ theme of romantic love, glories in the wisdom of Valentine’s Day falling not in the ‘rich cornet of the coming May’, but in ‘praevernal’ mid-winter:

Well dost thou, Love, thy solemn Feast to hold
In vestal February;
Not rather choosing out some rosy day
From the rich coronet of the coming May,
When all things meet to marry!
O, quick, praevernal Power
That signall’st punctual through the sleepy mould
The Snowdrop’s time to flower,
Fair as the rash oath of virginity
Which is first-love’s first cry;
O, Baby Spring,
That flutter’st sudden ‘neath the breast of Earth
A month before the birth;
Whence is the peaceful poignancy,
The joy contrite,
Sadder than sorrow, sweeter than delight,
That burthens now the breath of everything…

‘Joy contrite’, in my opinion, seems to me to be one of the best descriptions of the essential mood of hope.  How fitting, then, is all this mid-winter symbolism when what the marchers want to draw our attention to is the same processes of life and love’s first stirring in the growing human being!  Fitting, too, or so I’ve come to see, is the annual ‘blackout’ that normally provides this huge gathering little or no coverage in the mainstream media outlets.  It used to shock me, and even anger me a bit.  It was a conspiracy of silence!  And it made the trip feel a little less worthwhile.  Now I simply see it as another reminder of, and a summons to, the inwardness and poetical that must be a companion to the outward and political that is the dominant characterization of this event and this cause.  The event, for me, even apart from the Mass at the National Shrine, has become equal parts Wallace Steven’s reflective “walk around the lake,” (or Mall, as it were), as much as it is a political march.

In looking at any number of social ills, the fierce social critic Ivan Illich, (though a radical, and never one to pull punches), maintained a continual soft spot for the oft-maligned Pandora, as well as her husband Epimetheus, who’s usually seen as a something of a nitwit, because of the strong emphasis Illich himself placed on the virtue of hope (the one blessing left in Pandora’s infamous box) in any attempts to heal society.  Rather than seeing Pandora as the carrier of sin because of her curiosity,  Illich elevated  Pandora as the ancient fertility goddess whose name meant “All Giver.”  For Illich, she was the keeper of hope, and Pandora’s Box, for him, was a sort of ark of sanctuary.  “Hence, for Illich, Epimetheus, Pandora’s husband, was not the ‘dull-witted brother of Prometheus-the-savior but rather the ancient cultural archetype of those who freely give and recognize gifts, care for and treasure life (especially during times of catastrophe), and attend to the conservation of seeds of hope in the world for future others.”[1]

“Seeds of hope”–I like that.   Here’s Illich in his own words regarding “Epimethean Men.”

If you’re near Washington on January 25, stop by the March.  You’ll be inspired.  Beneath the clamor, you’ll find thousands and thousands of people who walking outside on a cold January day who value the virtue of hope above all else.  Being in the presence of Epimethean Men and Women on a mid-winter’s day is good for the soul, and good for the country.