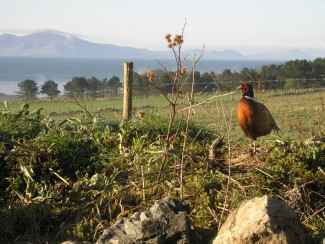 A little over a year ago, after hearing my bitter protests about another pathetic talk by some expert on education whose vision of life I find basically revolting but whose blather I am contractually obligated to attend for my own “development,” my wife informed me that no one wanted me to be at the talk. I didn’t want to be there, the speaker didn’t want me (and my objections), and many of my colleagues would be perfectly satisfied at my absence. “I was,” she declared, “excused.”

While having no authority to grant my absence, I accepted her decision, happily spending the most recent development day in the woods, rather pointlessly walking in circles, a stick in hand. Other people refer to this as pheasant hunting, a youthful love robbed by development days and other such wastes of time and pleasure.

No pheasants were had that day (or the others that followed), but I was ever so happy, and, of course, began to read hunting stories again, including Facing the Hunter: Reflections on a Misunderstood Way of Life, by David Adams Richards, one of Canada’s preeminent writers.

Only incidentally about hunting, although the subject fills every page, Richards is defending his people, the residents of New Brunswick, particularly those living, hunting, and dwelling the woods and bogs near the Miramachi and Matapédia rivers.

“‘Progressive’ is such a damnable word,” Richards states as his opener, now meaning “that most of the people I have known and loved are somehow less than others.…” Progressive now means that “a neophyte poet” can sip Chardonnay, “warmed by oil and well fed by buffet,” despite droning “how deplorable it was for men to work in the oil patch, to hunt with weapons.” While many surrounded the poet, “nodding their heads at those terrible people he got to skewer,” Richards has “always disliked men like this, clever enough to have expensive cloth covering their arses, and pleased to carry with them a register of human complaint … a subversion to a tradition that, so often, they have never themselves encountered.” Basically ignorant, these “transgressionalists … have chosen their targets very carefully, so as never to be alone,” which is a “very strange way to show liberal empathy.”

But these deplorable men and women, those who hunt and log and mine and drill, are most often, without recognition, caring for their detractors, those who sit warm, safe, sheltered, and sated far from the labor. As parable, Richards tells of the local guides who protect, feed, and lead others, usually urban, usually rich—clients are called “sports”—along secret trails to haunts of moose and deer, very often doing the hard and dirty work for the sports, many of whom take bad shots, abandoning wounded animals for the guides to track in the dark and danger, demanding breakfast even as the guides carry out hundreds of pounds of meat.

And as the “sports” mock and deride them for their poverty, ignorance, and lack of hunting prowess. Many of the urbanites, Richards suggests, kill rather than hunt, looking for trophies to “become a symbol of the danger” faced, feeling brave once in the lodge or on the plane back to Chicago, whiskey in hand. Free from any direct dependence on the locals, they were “amused” by them, “festive in their amusement about the backward people,” people whom “their cynicism now emasculated.” Often, Richards states, they mock the backward people not only for their old trucks with bald tires but for their lack of hunting prowess, evidence of which is the locals’ indifference to the trophy kill, often satisfied to take a deer of modest rack. Richards is having none of this, rather forcefully reminding “sports” that the guides use game in ways utterly foreign to them, namely, for food. For the sports, “animals are no longer animals … [t]hey are trophies … used for show.” Sports forget the guides would “have outlasted these men in the woods, and walked them into the ground,” that they had placed tree stands “exactly where they would offer the best opportunity for a rack that any half-assed shots could take home, with bragging rights, to their wives.”

Sports, and other detractors of those who live and love the Miramachi, tend to respond “in that self-complicated silence that unknowing people often have,” rendered “naïve” by their “ideas.” Such ideas, however, are ignorant, utterly incapable of grasping the rich knowledge, usually mediated by previous generations and appropriated by countless hours of toil, attention, and love, which the guides possess of their place and its unrepeatable grandeur and terrors. Richards repeats this frequently in the book, trying to have his reader grasp that his friends, these woodsmen, were “excellent,” “able,” “intelligent,” and “good.”

In fact, praising someone as a “good hunter,” for Richards, means far more than that they frequently bring home game. Many of these men let animals go, intentionally lose fish off the line, wait for another day or a better shot. All this is evidence of their status as “good hunter,” for they have the virtues and excellences proper to the activity. Just as a craftsmen isn’t judged by his output but by his craft, so too the woodsman; and just as the craftsmen has real wisdom—not only the skill of his craft but also the character gained in its pursuit: patience, moderation, honesty, generosity, courage, hospitality, teachability, respect for self and others, kindness, diligence—so too the woodsman.

Crafts have histories, of course, and the craftsmen are apprenticed into the standards of their tradition, and so for Richards it’s high praise that he could not “tell the difference” between his friends and a “picture of hunting guides from the last century … they have lived the same kind of life.”

They have lived the same kind of life, “all of them have lived lives as worthy as the lives of anyone I have ever met.” This is no small feat—to have lived a worthy life—particularly when “the age has moved on,” and when the “idea of being that much a part of the world is … no longer in fashion.”

And yet, to be that much a part of the world, that is, to know and love a place, is to live worthily, hunter or not.