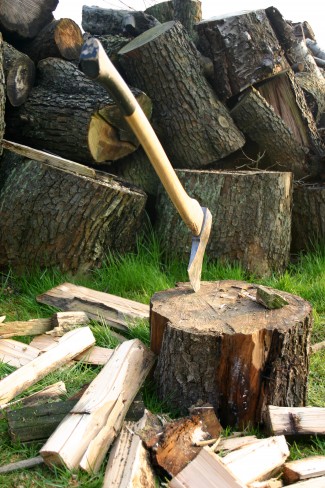 Hilaire Belloc once wrote that he never burned anything but oak in the huge fireplace of his ancient home in West Sussex. For a while I considered doing the same in the wood stove of my home in the Shenandoah Valley.  Oak of several kinds are indeed abundant here. Then practicality intruded. It has a way of doing that. There are in fact a number of eastern hardwoods that have a higher heating value than oak, such as hickory and locust. When upon approaching my home in winter one smells the smoke curling out of the chimney, there are a number of possible suspects: oak (red, black, and white), black locust, red elm, hickory, and less often, cherry or maple.

For thirteen years we have heated this house almost exclusively by wood; and I have never purchased a single cord. All the wood that I use is bucked with my chainsaw and hand split with a maul or axe, by me, my family, or my college students. My commitment to purchase neither wood nor hydraulic splitter is at times a sign of contradiction. It has been pointed out to me on numerous occasions how much time I would save with a hydraulic splitter—a ‘splitter’ in common usage. When upon hearing that I heat my house by wood somebody asks, “Surely you have a splitter?” I usually point either to my son or to my arms. For most people there is a very simple line of reasoning: the hydraulic splitter saves time and is therefore better, if at all affordable. For a number of years I wavered. Time is always at a premium, and sometimes I feel as though I simply cannot keep up with the demand for wood. Before my son Nicholas grew strong enough to be a significant help, the volunteer assistance of my students was indispensable.

The situation recently came to a head when someone simply said to me: “What you’re doing is not economical.” Economical? My accuser proceeded: Why not just purchase the wood you need? Think about it John. Since you are a professional and your time is worth more per hour, you would be better off to pay someone else to do it for you—or in other words, buy the wood. Heck, since you’re a writer and lecturer, spend the hours writing and lecturing that you would have spent getting wood. You will come out ahead.

I really puzzled about this for a long time. It seems that here I have bumped up against an unquestioned, at times unconscious, assumption of many in our society: that money can be used as the most reliable standard for measuring and comparing activities—at least all those activities that are not obviously of a higher order, such as worship. But it seems to me that this assumption is dangerously flawed. There are countless activities and forms of work that I could pay someone else to do for me, at a wage well below what I earn, which as an academic is modest by many standards. Is the goal to make enough money that I can pay others to do all the menial, or manual, activities in my day? Or perhaps more realistically, to pay others to do as much as possible, given the limitations of my income? That, it seems to me, is a common, if unrecognized, trap.

If on the practical level ‘economical’ means arranging one’s affairs to maximize the earning and utilization of money with a minimum of work-input, then the project of heating my home from the wood of my forest is not economical. By the same standard I fear that raising my own children would not be very economical. Once money, especially in the form of hourly wage, is used as the fundamental measure of the worth of activities, where do we stop?

Greek philosophers of the fifth and fourth century B.C. are the origin of the word economy. Oeconomia, literally the law (nomos) of the household (oecos), referred to a rational ability, also called an art, that arranges the various aspects or parts of household life. The word nomos, rather than meaning law in the proper sense here, more connotes an order. Some kind of order must be put into the home. For these Greeks, arts are rational abilities, learned both through the mentorship of masters and much personal experience, whether the art of shepherding, ship-building, or military strategy. Any art at root gives order or arranges its subject matter so as best to achieve the end or goal of the art. The goal and the methods of the art of shipbuilding are relatively obvious and beyond dispute. The arts directly concerning human life and community are more complex, and disputed. But Aristotle stakes out a position regarding oeconomia that echoes down through the ages and reverberates in my ears: “household management attends more to men than to the acquisition of inanimate things, and to human excellence more than to the excellence of property which we call wealth.” (Politics I.13)

People, and their good, must be put first in household management. As Socrates says in the Apology, the good man is the one who actually treats more important things as though they are more important. How we arrange things in our household should always have first to do with the good of the people that most essentially constitute that household. Perhaps I am missing something, but I think this is much easier said than done. I have often found that in my zeal for money, and sometimes for free-time, I have lost sight of the persons whose happiness is the whole point.

How then might I think about splitting wood by hand? The main thought that kept coming to mind is simply how much I enjoy it. There is a unique satisfaction in a well-placed strike that sunders a round of wood. Hand-splitting is a full-body experience, engaging countless muscles and all five senses except taste (actually, sometimes even taste). The rhythmic smack is followed by a pungent scent determined by species and age of the wood. A few rounds slowly grow into a pile of triangular pieces that stands as a solid monument to the work you have just done. You cannot help but look upon that pile, and then look back again, having a feeling of personal accomplishment. “That pile will keep my family warm for … days.” Refreshed, exercised, and satisfied, you turn to whatever else the day holds in store. And this is to say nothing of the conversations had, and bonds formed, with fellow splitters.

So I ask myself: Should I really give this up? Am I being silly by continuing to do that which a machine, or purchased wood, could easily replace? I think I have at last come to my final answer: no. This is not silly; it is good. Work, especially manual labor (manual of course originally means by hand), has an importance in itself. Our society seems to have accepted with little or no consideration the premise that manual labor should be avoided if possible. I suggest that manual labor, as a particularly human form of work, has a special and enduring value in human life. This is especially evidenced in its power to unite the one working with other persons, places, and things.

When Hesiod wrote, “The gods have decreed work for men!” he does not refer to a cruel twist of fate. Certain kinds of work are in fact a blessing, a way not only of producing goods, but of enacting fundamental connections. Given the importance and value of splitting wood in my household, I have realized that to replace those many hours with an hour or two of running a machine, or with purchased wood, would be a net loss, a sign that something has gone wrong. The machine is certainly not evil. And I can picture a scenario—for instance injury or sickness—in which I would turn to it. Nor am I arguing that splitting wood by hand is for all households. But I do assert that to replace a profoundly human form of work simply because one could come out monetarily ahead, or even save time, is not in itself good. To do so might well be an instance  of putting things above persons.

My son Nicholas is now in his early teens. He can swing a pretty mean axe, piling up the wood with steady progress. I remember well when multiple strikes of his little axe were as so many raindrops on a window. As years passed by we kept setting up a chopping station for him at a safe distance from mine. Little talk, much swinging, even if not much splitting. Then the tell-tale sound—a sort of hollow echo—of a strike that has hit home. This followed by the ripping sound of a strike that has broken through. I will never forget his looking over to see if I had heard that magical sound. Of course I had. I would not take that away from him. I would not take it away from us.

John A. Cuddeback is professor of Philosophy at Christendom College in Front Royal, Virginia, where he has taught since 1995. He received a Ph.D. in Philosophy from The Catholic University of America under the direction of F. Russell Hittinger. He has lectured widely on various topics including virtue, culture, natural law, contemplation, friendship, and household. His book Friendship: The Art of Happiness was republished in 2010 as True Friendship: Where Virtue Becomes Happiness. His writings have appeared in Nova et Vetera, The Thomist, and The Review of Metaphysics, as well as in several volumes published by the American Maritain Association. Though raised in what he calls an ‘archetypical suburb,’ Columbia, Maryland, he and his wife Sofia consider themselves blessed to be raising their six children in the shadow of the Blue Ridge on the banks of the Shenandoah. At the material center of their homesteading are their heritage breed pigs, which fattened on acorns, yield a bacon that most of the world can only dream of.