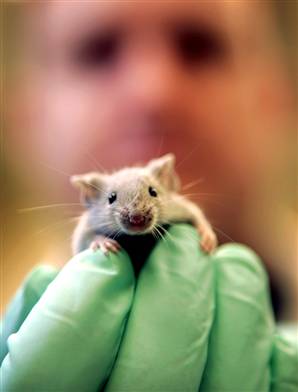 As explained by Anthes, scientists in China are hoping to understand the human genome by “randomly disabling mouse genes one at a time, in order to identify the function of each gene.” Rather than first identifying the gene’s purpose and then looking for uses, cures, or abnormalities, so-called “jumper genes” are introduced into mice embryos, turning off a single gene, as scientists are “essentially throwing darts at a genetic dartboard to see what happens.”

The results would be humorous if not so macabre. There are mice with male-pattern baldness, mice with OCD, mice capable only of left turns (who knew mice could be progressive), mice with tusks—45,000 cages of a bizarre menagerie.

Listening to the interview, I could not help but think of Charles Williams’ novel, The Place of the Lion. All of his novels are “metaphysical thrillers,” and perhaps this novel more than the others, with an utterly remarkable final scene in which a new Adam strides forth into a maelstrom of Platonic principles and angelic principalities to rename and reorder a fragmenting and disintegrating reality, and in so doing recapitulating the primordial task of the first Adam in naming, keeping, tending, governing, and filling the garden.

Here’s a snippet from the finale:

Adam … was calling as he had called in the streets of the town. But now he uttered not one word but many, pausing between each, and again giving to each the same strong summons. He called and he commanded; nature lay expectant about him.… At each word that he cried, new life gathered, and still the litany of invocation and command went on. By the names that were the Ideas he called them, and the Ideas who are the Principles of everlasting creation heard him … [i]n their animal manifestations, duly obedient to the single animal who was lord of the animals, they came.… They were returning, summoned by the authority of man.…

Fantastical as that sounds, Anthes describes a similar power and authority, where at each word cried, new life is gathered, although this work “is experimental, and no matter how well you think it out, you never know quite what the resulting animal might be like, what its health might be like.”

In other words, we speak and new life appears, but we don’t really know what we’re saying, we’re speaking somewhat randomly, curious to see what sort of life appears. “Will it have cancer? Or arthritis? Will it glow in the dark? Will its organs be jellified? Will it have tusks?”

Pursuing a similar thread, in That Hideous Strength, C.S. Lewis narrates a shockingly memorable scene in which Merlin (yes, that Merlin) liberates the animals upon which the National Institute of Coordinated Experiments (N.I.C.E.) conducts horrible experiments before casting Babel’s curse on the scientists who lose the capacity to speak before the animals savage and kill many of them, a reversal of the order of things, but just nonetheless.

In his new book, FPR’s Mark Mitchell explains gratitude as “a disposition of thankfulness that is an appropriate response to an act of goodness.” For those of us convinced that creation is a gift, creation itself depends upon an act of goodness, and thus an appropriate response is thankfulness. Further, since creation is good, and goodness is a proper perfection or act, creation carries internal to itself a proper perfection, a principle of actuality or form which, although given to it, is properly its own. Propriety requires acknowledging this goodness as the property of created things, and thus a disposition of thankfulness in response to that goodness is due.

But the act is not ours, it is not for our disposal or curious use. In fact, since creation possesses its own goodness, gratitude is a demand of justice, there is a moral duty to be grateful, for ingratitude is to not render what is due, namely thankfulness in response to an act of goodness.

Such gratitude is perhaps obvious to any who can recognize the “dearest freshness deep down things,” but for those alienated from that goodness, I suspect all is seared and bleared, and the soil cannot be recognized as an act of goodness.

More and more I suspect that the attempt to order our speech–our power and presumption–is a futile task if our fellows do not respond with horror and revulsion to the notion of insect cyborgs and tusked rodents. But this brings horror only if, like Plato tells us, graciousness is already in the soul. That is, if beauty is not already loved and the cause of delight.

And there seems so little beauty sometimes, and so little delight in what is beautiful.