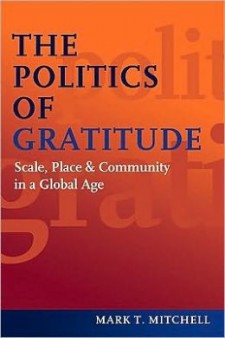 At my worst moments, I succumb to thinking that we have become utterly trite, absorbed by ephemera, thin of character, quick but scattered of intellect, weak of will, and just at a moment in which we face gravely serious issues. We need Pericles or Alcuin or Aquinas or Milton or Lincoln, but we have the UN and Dewey and John Shelby Spong and the National Endowment for the Arts, and . . .  well, take your pick from among the politicians.

Despite some earnest wishes for a Third Way, our politicians and politics seem, as Front Porcher Mark T. Mitchell, puts it in The Politics of Gratitude: Scale, Place, and Community in a Global Age, “dominated by ‘liberals’ and ‘conservatives’ who often seem both illiberal and downright hostile to conserving much of anything.”

As an alternative to politics as usual, Mitchell develops “the politics of gratitude,” articulating foundational principles generally overlooked in our dead-end political oscillations, namely, (1) creatureliness, (2) gratitude, (3) human scale, and (4) place, before explaining the implications of those principles for (1) politics, (2) economics, 93) the natural world, (4) family, and (5) education.

The politics of gratitude is, he explains, rooted in stewardship, to persons “who commit themselves to preserving the good things of the world. Together they dwell in their various places, watching over those places and the good inherent therein as they tend them in trust for the next generation. Stewardship gives birth to acts of responsibility and care that are oriented toward the long-term preservation of the natural, cultural, and institutional goods we have inherited, even as it seeks to improve them.…”

Of all the wise and commendable aspects of The Politics of Gratitude, both theoretical and practical, I was struck most with the primacy of goodness in its “cultural vision.” For Mitchell, we are stewards to dwell with and watch over the good in our places, preserving and developing those same goods for others. Goodness, not scarcity, not competition, not moralism, not choice, not wealth, not nationalism, but “a deep affection for the sheer goodness of life” grounds the vision.

In this, Mitchell is very similar to other prophets of goodness with their accompanying delight and affection for things, folks like Chesterton, Belloc, Lewis, M. F. K. Fisher, Robert Farrar Capon, and also Aquinas, Hopkins, Kirk, Röpke, and Tolkien. Those sturdy souls who need no ideology in order to resist evil, but rather memory, a recalling of the way the beloved place or person or group looked, or smelled, or felt; those treading through doom for the Shire, for the Gaffer, for Rosie, for potatoes. Such prophets know that the dearest freshness is in things, and that this freshness calls for us, first and foremost, to attend, to note, and only then to tend, so that our work and labor is in keeping with the thing’s goodness and not a struggle to make it comport to our arbitrary will.

Such prophets are free, taken up with delight and joy at reality, and the gift of being—that it exists is wonderful. The old line from Chesterton is still a good one:

Because children have abounding vitality, because they are in spirit fierce and free, therefore they want things repeated and unchanged. They always say, “Do it again”; and the grown-up person does it again until he is nearly dead. For grown-up people are not strong enough to exult in monotony. But perhaps God is strong enough to exult in monotony. It is possible that God says every morning, “Do it again” to the sun; and every evening, “Do it again” to the moon. It may not be automatic necessity that makes all daisies alike; it may be that God makes every daisy separately, but has never got tired of making them.

So, too, is Mitchell “strong enough to exult” in reality, and to be grateful.

This is no small accomplishment. In beginning with our creatureliness, he notes our limits rather than our autonomy, our confinement rather our rootlessness, and while the temptation toward hubristic emancipation—the “radical ingratitude” of our age—is almost overwhelming, Mitchell reminds us that we have a duty to be grateful, that ingratitude is moral failure. This is no mere manner or nicety of etiquette, however, for such can be, and have frequently been, means of maintaining the privilege of the powerful and keeping things in their place; instead, real gratitude “is different. It is a disposition that is the result of goodness.” Gratitude is a response to goodness, even, or especially, for that goodness which is our very being and our very nature—the goodness we dwell in as the gift of our limits.

It needn’t be thought this way. Mitchell articulates how the thrust towards independence in Aristotle results in gratitude’s absence from the list of virtues, but an understanding of proper dependence, of creatureliness rather than hubris, and of the goodness entailed in the status as creature, makes gratitude the fitting response.

Consequently, “an appropriate sense of scale,” the rejection of giantism” in favor of what we can understand and where we can dwell, is not a merely aesthetic preference or nostalgic pining, but rather a solid judgment that there are “limits of our love,” which “cannot extend indefinitely.” Scale, place, subsidiarity, the local, federalism, home, tradition, community, these are in keeping with the order of reality because they allow us to love what is good. Progressivism, materialism, centralization, boomerism—these either do not like, or cannot see, what is there, but in either case do not love the good which has been given.

Practical suggestions regarding political order, market economies and private property, mobility and the three-generation family, city, suburbs, gardens, parenting, education, and homemade bread, are thus, in The Politics of Gratitude, not mere whims, excoriations, or assertions, but rather explanations of the goodness Mitchell knows—the goodness of place, vineyards, books, family, friends. Of necessity these will be his place, his vineyard, his books and family and friends, and yet, given our creatureliness and the limits of our nature, there is something fitting for us all in his recognitions. Again and again, however, he notes the reason for his conclusion on this or that issue: “what is good for human beings,” “private property is good” because of its relation to virtue, sterility is to be rejected because of the good “giftedness of life,” we teach children “the goodness of work” and the goodness of good food. All, of course, because “happiness … is a life of excellence in accordance with goods and standards that are suited to human beings.”

Our usual political and social reality is burdened by preferences and desires, rights and choices, but not very much gratitude. We do, at times, hear token notions of thankfulness for our “great country” or some such thing, but even then the spirit is about freedom, choice, wealth, and not often about the great good which is our finite creatureliness. Infrequently are we locked together in political combat as each attempts to outdo the other in expressing delight about the world and those in it.

Much good would come if we, like the prophets of goodness, spent some time exulting.