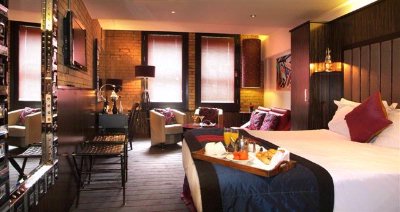 Beyond the purple velvet drapes, the skeins

Of billowed gossamer, my hotel window

Looks down on the back gates of Trinity

College.  Up three floors and pierced by a late

October sun, the room has been done up like

A swinger’s pad, with leopard print and leather,

With mirrors and conic shaded lights in orbit

About the dark mass of the pillowed bed.

This style was once regrettable.  And now:

Now, all regrets are off.  Tour buses crowd

Streets pounded, once, with fire from a British

Hastening to catch the train back to Roscommon

Two women, with whom I shared a cab

In from the airport, stared out at the palms

And waited for some ginger-headed priest

Or pink-nosed drunk to trundle down the road.

My room’s a tiger of prosperity,

Designed by someone so assured that now

The exile ship and Eucharistic Congress

Are past, a buried fashion can be flirted

With; someone who would never understand

Why the tourist from Schaumburg or Roxbury

Would hustle past the brushed steel of the hotel

Bar, off to have a pint in Wicklow or

Sit down for tea and fry while sight-seeing Tara.

Why should the Polish maid in the corridor

Regret that things turned out this way?  Here where

The sorrowed past was only lately lost?

It’s four years now since I last saw these streets,

Since I decided to move home, and since

Life, winding up in South Bend—and met you.

This city’s swelled with luck, and I could wish

It otherwise: the vomit in the late bars,

That vend to hotel guests their “burning passions.”

The fields of Ireland have always wished

Things had been different—or that they were now.

Hilary, the mind obsessed with its own powers

Pretends that this or that decision, words

Called out to a shy woman in the dark

Of summer, with the river sounds, the sounds

Of drunken chatter and the swinging gate,

Unknown.  There may be many things undone,

About which I may think though they’ll not be,

As if they were lead figures on a board,

Subject in their position to my scrutiny.

They can’t be unconceived or lived without.

The great impossible is to unthink the path

And fortune’s fleet missteps that carried me on it,

That brought me to you, and you within my mind

To dwell as the immobile real called love.

Because of the odd shock, I’ve sometimes said,

No counter-factual alternate course in time

Seems less real.  For, your actual love and being

Have made their print so firmly that I can

Neither think of a life without you nor

Quite think without your presence looming up:

Always, your eyes beneath dark hair, your voice

Rising with singular certainty to greet

Me in the silent rooms of every city.

A version of this poem has been published in the current issue of The Raintown Review, and will appear as the concluding poem of my next book, The Violent and the Fallen, forthcoming later this year from Finishing Line Press.  The last copies of my first book of poem, Four Verse Letters, are still available from the author for a discounted price; please write to fourverseletters@gmail.com to purchase.

One of the pleasures of republishing my poems from literary journals on FPR has been providing a little context or commentary to draw out their themes, and this one has always struck me as bearing upon some of the central themes of this site.  And yet, I shall abstain from this pleasure for once, if only because this is a poem whose precise meaning I only properly grasped retrospectively; indeed, it took quite a bit of reading in authors I did not know when writing the poem to build up the vocabulary I needed to explain this poem to myself.  So, at least this once, I’ll hopefully leave that pleasure of exploration to the reader who wants it, and spare the reader who does not the unsollicited pestering.

An Elegy for South Bend