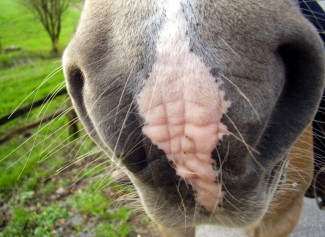 If you could boil our global problems down to seven words, they might be these: we don’t see where stuff comes from. Most of us grew up staring at glowing rectangles without ever seeing a coal-powered turbine. We blithely speed down motorways without ever visiting an oil derrick. Most of all, we eat mountains of meat a year without having to grab a live animal or smell blood. Like most things in our lives, meat just magically appears in front of us, and we eat it.

That last example hit home for people in Europe recently, after the Irish government tested frozen burgers from a major supplier and found that some of the alleged beef was actually horsemeat. Irish and British discovered their top groceries and restaurants had been feeding them horse for a long time — probably unknowingly, but shoppers and investors dropped them all the same.  Within 24 hours of the first announcement, the UK’s top grocery chain lost 360 million euros ($471 million) — five per cent of its worth. Within a few days food companies took ten million burgers off their shelves — although the papers don’t say what happened to the meat afterward – and the next few months saw a reporter’s dream of press conferences, apologies, arrests, pledges and retests.

The scandal quickly spread across Europe, as country after country tested meat sold in its own shops and cafes and found they were not eating what they thought they were. The latest tests announced this week finally cleared Ireland, where the scandal began, but mislabelled meat is still showing up across Europe – and as far afield as South Africa.

The irony, of course, is that horsemeat is not harmful, and little different than cow, as evidenced by the fact that no one can tell which one they ate.  Aside from a veterinary medicine showing up in minute amounts, no one has suggested that eating it had any ill effects, nor is it illegal; my daughter and I happily bought horse-kebab from a street vendor in Dublin the other day. (At least, he said they were horse, but you never know …)

Rather, the emotional punch – and inevitable punch-lines – that came from the idea of eating Black Beauty obscured more important details. If up to 30 per cent of some samples were horse, up to 80 per cent of others were pork. “Meat-filled” pastries in Iceland turned out to have no real meat at all, while South African meats had an interesting menagerie of buffalo, goat and donkey. Other samples allegedly had green mould on them. The horses might have been slaughtered up to two years ago, dead flesh just sitting in freezers.

Most important, though, is the fact that governments and stores had such difficulty sourcing the meat. This detail proved especially galling for many people on these islands, who had already seen UK outbreaks of hoof-and-mouth in 2007 and 2001, as well as mad cow disease in the 1980s and 90s. Restaurants and stores here proudly advertise their “Irish beef,” not only to support local farmers but to distance themselves from such contaminations. Now, it turns out, some of it was neither Irish nor beef, and no one knows where it came from. It just magically appeared in front of us, and we ate it.

We accept buying meat from strangers for the same reasons we buy everything else in our lives from strangers these days: because we trust that someone, somewhere, knows what they are doing. On the rare occasions we associate the food on our plates with actual animals, we tend to assume they must have come from some kind of farm, like the overall-and-pitchfork images of preschool toys. We don’t picture supply chains so long and cobwebby that we can’t find out what kind of animal it used to be, or in what country, let alone how it lived.

Consider how strange this would seem to most of our ancestors, for thousands of generations back. For most of them meat was life; while most foods could be grown or picked, meat was the Leibig’s Minimum that forced people to be predators. Their craving for meat transformed the landscape, wiping out the planet’s large animals as thoroughly as an asteroid impact did the dinosaurs, and we now know Neanderthals or Clovis people by their meat-getting technologies. It was the main reason we domesticated animals, and that spurred empires and conquests – the Sanskrit word for “war,” I’m told, means “a desire for cows,” and the ancient Irish epic the Tain Bo Cuailnge involves a nationwide war over a single breeding bull. The very word “meat” meant “food” in Old English, so inextricable were the two.

Such concentrated nutrition comes with a price. Until recently we lived much closer to animals than we might like to imagine — often in the same house – and pigs ran openly through streets in Europe and the USA even into the 20th century.  Many of our human diseases come from domesticated animals — influenza from ducks, for example – and for thousands of years our bodies have been at war with the germs they send us. When Europeans first encountered the Americas and Australia, the thousands of years of accumulated pathogens in their bodies wiped out 95 per cent of the native population, leaving the wilderness the pioneers found. Our desire for meat, in short, is the reason Americans and Australians will read this in English, rather than Parisians reading it in Aztec.

This dealing of life and death might be the reason so many of our religions bind us in meat taboos — Jews and Muslims ban pig meat, Hindus cow meat, and Catholics all meat on Fridays and through Lent. Many of our rituals do the same, invoking the body and blood of the Word made flesh.

Because meat was so precious, most human societies are much less finicky than we are today about what kind of animals they ate. People throughout world history have eaten insects, snails and other invertebrates; birds, reptiles, amphibians and mammals of all kinds; something as mountainous as a cow or stag might be stretched into months of food. Even today, most cultures eat both less meat than we do and more variety; for example, I recently saw a letter from a Catholic bishop in Louisiana, USA, assuring his congregations that alligator could be eaten during Lent.

When we keep animals for food, they don’t always stay put; the snails so common on these islands were snacks brought by Romans, as rabbits were a thousand years later by Normans. Polynesians carried rats on voyages for meat, and their escape helped scour island after island of their native bird species.

Most Americans I know eat two birds, chicken and turkey, and have never held one alive – but most of our ancestors ate many more, both for meat and to protect crops. Elderly Irish, who grew up in agrarian days when money and meat were rare, caught songbirds in wicker traps called “cradle-birds,” and one elderly couple told me that blackbirds were sold as food in wartime London.

Fishing, likewise, supported many communities, but less all the time these days. To take one example from Mark Kurlansky’s book Cod: A Biography of the Fish that Changed the World, early explorers to places like Newfoundland simply dropped baskets into the sea and came up with them full of fish, so plentiful were the cod. By 1960 fishermen in the North Atlantic were catching 1.6 million tonnes a year, and thirty years later that number had dropped by almost 99 per cent. We are fishing the sea clean.

In my native USA, where people eat more meat per capita per year than anywhere else in the world, we have not yet overhunted the land, but that’s mainly because we get most of our protein from the hog or beef “factories” described in Eric Schlosser’s excellent book Fast Food Nation. I have talked to many Midwestern farmers whose lives have been shaped by these nearby places they can never see but always smell. Towns in my native Missouri, locals tell me, are now filled with two kinds of people: the elderly and the Hispanics that work the meat factories, and neither are expected to be around long.

Of course, many people recommend a vegetarian diet, and they are right to think that most Westerners would be healthier if they ate less meat. However, vegetarians show the same extreme thinking, in abandoning all meat, and the same disconnection from the source of their food. A vegan diet requires using vast areas of land that were once forests to grow high-protein crops like soybeans, and making our society’s soy milk and designer soy-products requires a massive amount of fossil-fuel consumption that might not always be able to afford.

Where we live, the landscape is still divided up into small family farms, and most people are related to a farmer – I’m friends with several around our land, and we see their cows every day. Most villages also have a butcher, and ours now features a sign about how he buys only from local farmers. He actually gives us more meat than we ask for, knowing that we like the bones and cast-off meats for soups.

Everyone here used to get meat from people like him, if they didn’t slaughter it themselves; it was only recently that the globalised supermarkets, with their shelves of cheap frozen meat and opportunities for fraud, began to proliferate.  In my native USA, though, one would have to rebuild the entire infrastructure – local farmers to local shops within walking distance – from scratch.

But we need to. If we want to know where our stuff comes from, and yet keep eating meat, then we need groups of neighbourhood boys raising pigs in the vacant lot, as wartime Londoners had, with neighbours buying shares of the bodies. We need to start sourcing food further down the food chain, to species that are still plentiful and that we will not risk exterminating. We need to expand the number of species we will eat a hundredfold, while reducing our meat dishes to a fraction of what it is now. We need to relearn how to make eel traps and cradlebirds, to grow snails in the closet and chickens in the shed.

And we need to know people like my farmer friend, who I see bleary-eyed from staying up all night with a calf. He gives his animals a better life than any they would have seen in the wild, infinitely better than on a factory farm, before making sure their lives end quickly and painlessly. It’s not easy for him, and it’s more expensive at the butcher, but that’s as it should be. Rather than wolfing mystery meat or snubbing it altogether, we could respect it again. Meat needs to become hard work to get and precious to eat, so that we again put some sacral value in the lives we take.

U.S. journalist Brian Kaller moved to rural Ireland several years ago, where he raises his daughter and studies traditional ways of life. He has written for The American Conservative, the Dallas Morning News, the Columbia Tribune and he writes a weekly column for his local newspaper.