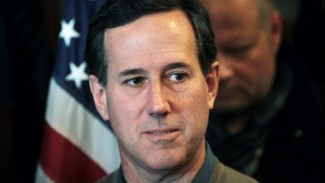 Berwyn, PA.  Many of us will recall the criticism Rick Santorum endured regarding this passage from a 2003 interview:

Every society in the history of man has upheld the institution of marriage as a bond between a man and a woman. Why? Because society is based on one thing: that society is based on the future of the society. And that’s what? Children. Monogamous relationships. In every society, the definition of marriage has not ever to my knowledge included homosexuality. That’s not to pick on homosexuality. It’s not, you know, man on child, man on dog, or whatever the case may be.

I found his remarks unsatisfactory only insofar as I do not think a “slippery slope” argument is necessary to demonstrate the irrationality of homosexual unions, nor have I ever been entirely at ease with the prudential strategy of defenders of marriage to prescind from the larger problem of the normalization of sexual license and perversion in order strictly to take a stand against the redefinition of marriage in its public, civil attributes.  It is true that the state has historically been involved in recognizing marriage because that is the social institution in which children are properly conceived, born, and raised; as is it the case that the argument in defense of that institution as presently recognized, and against its redefinition as the public subsidy of sundry private amours, is sufficiently compelling on that basis alone.

But, such rational claims are likely to be trampled down in a culture largely committed to only two principles: autonomy of appetite and free consent.  We have witnessed our entire civilization gradually bulldozed and reconstituted in order to accommodate the principle that one’s guiding interest is the pursuit and attainment of whatever one happens to desire at a given moment, delimited only by the second principle that all persons involved in that desire consent by their own free will.  I have outlined the features of this “culture of atomic eros” as greater length elsewhere, and have anatomized the social psychology that has made homosexual “marriage” imaginable despite its logical absurdity as well.  Prudentially restricted defenses of this or that sound moral principle cannot long retard the decay of a society so deeply committed — as ours is, I have argued — to its own “liberating” self-immolation.

And yet, what stirs me to write this morning is just one such prudential defense of marriage: Carson Holloway’s excellent discussion of the “slippery slope” argument against homosexual “marriage,” prompted by one of the queries Justice Sotomayor made during the Proposition 8 proceedings before the Supreme Court last week.  Holloway begins,

Opponents of same-sex marriage resist it because it amounts to redefining marriage, but also because it will invite future redefinitions. If we embrace same-sex marriage, they argue, society will have surrendered any reasonable grounds on which to continue forbidding polygamy, for example.

In truth, proponents of same-sex marriage have never offered a very good response to this concern. This problem was highlighted at the Supreme Court last week in oral argument over California’s Proposition 8, the state constitutional amendment that defines marriage as a union of a man and a woman.

Surprisingly, the polygamy problem that same-sex marriage presents was raised by an Obama appointee, the liberal Justice Sonia Sotomayor. Sotomayor interrupted the presentation of anti-Prop 8 litigator Theodore Olson to pose the following question: If marriage is a fundamental right in the way proponents of same-sex marriage contend, “what state restrictions could ever exist,” for example, “with respect to the number of people . . . that could get married?”

In response, Olson tried to set up a clear distinction between same-sex marriage and polygamy, suggesting that the kinds of governmental interests that justify a prohibition of polygamy are irrelevant in the case of same-sex marriage.

The Court has said, he contended, that polygamy raises “questions about exploitation, abuse, patriarchy, issues with respect to taxes, inheritance, child custody” and therefore “is an entirely different thing” than same-sex marriage. Moreover, Olson argued, when a “state prohibits polygamy, it’s prohibiting conduct,” but if “it prohibits gay and lesbian citizens from getting married, it is prohibiting their exercise of a right based upon their status.”

Justice Sotomayor’s concerns about the possibility of a path from same-sex marriage to polygamy may arise from the fact that there is already a case in federal court challenging Utah’s anti-bigamy law as unconstitutional.  In any event, she should be just as concerned about this question after oral argument as she was before it, because none of Olson’s distinctions can reasonably justify a prohibition on polygamy if the Court finds a constitutional right to same-sex marriage. To see why, it’s first useful to note a crucial distinction that Olson overlooked, as well as the most famous Supreme Court case regarding polygamy, which he failed to mention.

He then proceeds to consider Olson’s arguments, point by point, in light of their internal logic and court precedent.  You should read the complete article here.

It amounts to a fascinating and definitive argument of the question out of which — so far as I can discern — there is no escape . . . no escape, that is, unless one wishes, at the last, to pursue the principle of autonomy of appetite, or libido dominandi, to its perhaps inevitable, fundamental extreme.  And I have no doubt that the ever-shifting, because untethered, desires of the contemporary West will pursue that principle until it can no further.  What chance could communal bonds, moral norms, and civilized obligations have of enduring in a society that has already demolished its conception of the rational and intelligible order of nature?  When one can justify the pursuit of  appetite ungoverned by reason, revelation, and custom as just another stage in the inevitable progress of liberty, one can justify anything.  When one disallows rational judgment in the public sphere, everyone and everything comes to appear “equal,” like so many particles of plaster indifferently drifting in whatever direction the wind blows.  So much T.S. Eliot observed some eight decades ago, when he wrote, “It is a commonplace that what shocks one generation is accepted quite calmly by the next.  This adaptability to change of moral standards is sometimes greeted with satisfaction as an evidence of human perfectibility: whereas it is only evidence of what unsubstantial foundations people’s moral judgements have.”

As I suggested above, the “slippery slope” argument on homosexual marriage has never sat entirely well with me precisely because it does not restore to moral judgment attention to its foundation in the natural order of creation.  Anything short of such radical — as in, to the roots of being — argumentation seems too willing to sway public opinion for the moment without revealing to a disordered society its need for perenniel conversion and renewal.

But, I can set that reservation aside long enough to appreciate the fine steel trap of Holloway’s argumentation: advocates of homosexual “marriage” delude themselves to think that they are standing in defense of “equality” or a “fundamental right.”  They are rather, however cloaked in darkness, working to eradicate the moral foundations of “rights” claims entirely from our legal discourse, until “right” becomes nothing more than a synonym for “I will it thus.”  As Edmund Burke so powerfully admonished the voluntarists of liberty more than two centuries ago, the private voice piping “I will it thus,” today, becomes the public fist of power arbitrarily crushing and reordering all beneath it tomorrow.  When reason surrenders to will, justice is only days from succumbing to power.  And no principle of “consent” can long stand in power’s way, as those executed by the Jacobins of long ago pronounced from the guillotine, and as the victims of abortion, in our age, testify with their silence.  Holloway concludes:

As these reflections suggest, there is very good reason indeed to believe that the declaration of a “right” to same-sex marriage will set us on the path to polygamy. To allay these concerns, the proponents of same-sex marriage sometimes respond that they are only seeking what married heterosexuals already have: access to marriage understood as a union of two people. But this reassurance utterly misses the point: All the arguments by which they seek that end can easily be turned to the purposes of those who might next seek polygamy.

This is not to speculate histrionically as to where a ruling in favor of homosexual “marriage” may lead us.  It is to expose the logic that guides an age committed to the incineration of reason for what it is: a culture of atomic eros fostered by a regime of libido dominandi.  If we are to see this clearly, we shall have to come to appreciate that the legislation-into-being of homosexual “marriage” is not the crest of some slippery slope; it rather lies at the bottom of the slope the West began to descend when it legitimated, normalized, and even came to encourage practices that pervert the gift of sexuality and the nature of the family: divorce, contraception, and fornication; the reconception of the home as a place to which autonomous individuals frequently repair for the reheating of frozen entrees and the recharging of their smart phones; and the reimagining of the altar of God as an occasional destination, should the weather be fair, at which to pass an hour reminding ourselves that, whatever else we may be, we are always “just fine, fine, fine.  If we were not, we surely would have noticed.”

Egalitarian Elites and the Academic Dilemma