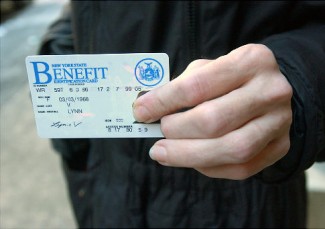 On a recent Monday morning, an officemate and I were discussing the current financial state—always a cheery subject on a Monday.  Mark, a financial planner, said that many believe we are currently in a for-real, genuine, bona fide depression.

“Many think the only reason we’re not seeing soup lines right now is food stamps,” he said.

Food stamps, and other federal welfare programs, so goes the theory, have filled the gap.They hide from most Americans how stark things really are.  If the federal government were to rip away its aid programs, whole industries—various types of farming, food processing, transportation, etc—would face drastic times indeed.  We Americans would see true failure, and would stop spending.  And 2013 America would start to look much more like 1930s America.

That conversation got me thinking.  How very dependent are we, as a nation, when we look to government handouts for something as fundamental as the food on which our lives depend?  Recent estimates have placed the number of those on food stamps at one in five Americans, and half of Americans will have been on food stamps by the time they reach 19 years of age.  Spending on SNAP—the Supplemental Nutrition Assistance Program, the new name for the Food Stamp Program—has drastically increased since the recession hit.  Since 2010, 80 percent of all Farm Bill spending (we’re talking billions of dollars) has been on SNAP and other aid programs.

Mark’s comment also brought back to mind a recent conversation I had with someone who was not at all dependent on anyone for her own food.

On a March vacation to Maui (our honeymoon, actually) my husband and I spent some time in Hana, a quiet little community  of about 1,200 people on the remote eastern side of the island.  The best way to reach isolated little Hana is the Hana Highway, 52 miles of narrow, twisting, cliff-hugging road that gives its drivers breathtakingly beautiful views of the Pacific (and some hair-raisingly close calls with hundred-foot drops).  You can also take a short plane ride from Kahului Airport, or attempt the “other” half of the Hana Highway, an even more dangerous trip along the southern shore of Maui.

On the first day of our time in Hana, we went on a guided horseback tour to take in more of the sights.  Upon arriving at the stables, we were greeted first by a wiggling puppy, a mixed breed but with definite traces of pit bull.  Our guide was a native Hawaiian named Carla.  She introduced us to our horses, and we were off within a few minutes.

Once on the trail, I asked Carla about the puppy.  How old was he?

Carla continued.  She had grown up near Hana, and she and her family ran a small horse-breeding ranch.  Because Hana is so very difficult to reach, food on that portion of the island is prohibitively expensive.  (“A gallon of milk costs five dollars!” she exclaimed in disgust.)  Most of the natives of Hana have learned how to circumvent the high cost of food, however.  They drive to the busier western side of Maui about once a month to visit a less expensive grocery store for the staples.  For the rest, she said, “We get our food from the land.”

Most Hana natives keep a small garden.  The ocean is full of fish.  The hunting is good, if you keep dogs.

I asked Carla how she trained her dogs to hunt boar.

“Oh, it doesn’t take much.  It’s mostly instinct.  You take them along a few times, with another, older dog who knows what he’s doing.  They watch, and instinct takes over.”

She said that almost any breed would do, but it helped if the dog had just the faintest trace of Pit Bull blood.  “It helps them hang on,” she said.

We asked Carla if her dogs ever got hurt.  Oh yes, she replied.  Carla never used guns when hunting boar, because she had seen too many people shoot their own dogs.  She used a knife instead, relying on her dogs to pin the boar down while she slit its throat.  She did her best to protect her dogs, and if they managed to lock onto the head or neck, they were usually ok.  But if the boar wrestled its head loose, the dogs could get deep wounds from its tusks.

When a dog was slashed, the hunter would have to stop the hunt, gather the hurt animal onto horseback, and hope the pup lasted the trip down the mountain to find the nearest vet.  Carla, however, had found a solution.

“KrazyGlue!” she told us, exultantly.  “When I first started using it, everyone thought I was nuts.  But now, they’re using it, too!”

The KrazyGlue works to seal up the wound and stop the blood loss.  If the hunter leaves just the tiniest slit open toward the top or bottom of the cut, any infection can drain out, and the dog’s body will do the rest.  The hunter, meanwhile, can finish up the task at hand—killing the boar—before taking the dog to the vet if need be.

By this point, our horses were plodding back toward the stables.  We dismounted, thanked Carla, and walked back to the hotel dining room to get lunch—no boar hunting for us.

I consider myself agrarian in my sympathies, and yet, that conversation with Carla brought home to me how very easy getting my own food is.  We live in an apartment in an urban setting.  I am starting a small patio vegetable garden.  We try to get our food locally, and we will visit the downtown farmers market regularly once it opens for the summer.   These are all good, healthy things to do.  But we do these things out of choice, because we recognize that there is something to knowing where our food comes from and supporting a local food economy.  I wish we could do more—own some chickens or barter with local farmers for meat.  But we can’t, because the infrastructure that would allow us to do so isn’t in place.  Zoning laws prohibit us (perhaps rightly) from keeping a chicken coop on our patio, and I have no idea how to go about getting my meat locally, because, sadly, I don’t know any farmers.

For Carla, on the other hand, and the other residents of Hana, growing and hunting their own food is a matter of necessity, not choice.  Food is expensive where they live, and so they wrest their living out of the land the best they can.  They are subject to the vagaries of weather and pests.  They ride horseback on the mountainside, relying on their dogs to lead them to meat.  They wrestle wild boar to the ground, and occasionally, they or their dogs are hurt.

Mine and Carla’s are remarkably different stories, and yet, both experienced in the same country in the same time, under the same government.  Both are stories of place, of what it takes to get one’s food in a particular place.  I have the utmost respect for the citizens of Hana, who opt for hunting and growing instead of food stamps.  And I think that stories like Carla’s—and perhaps mine, too—should be shared more often, so that we all might have a better appreciation for how food is obtained in particular places, and perhaps so that we might gain new ideas of how we can grow food in our particular place.

And, of course, so that we might learn new uses for KrazyGlue.

Nicole M. King is the managing editor of The Family in America.