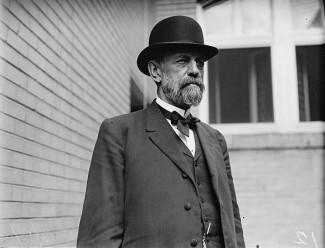 Sioux Center, Iowa.    Thursday I toured the home of Richard F. Pettigrew, South Dakota’s original representative in Washington.  The Victorian house was interesting, with some beautiful features, but I was drawn to the museum in Sioux Falls because Pettigrew is one of my political heroes.  What other former Republican member of the U.S. Senate would write a book published by a socialist cooperative?  His book, entitled Imperial Washington and published by Charles H. Kerr of Chicago, featured a blurb on the front cover saying, “It is a great book.”  The blurb writer?  Nikolai Lenin.  Another first—and last—for a former GOP politician, I’m guessing.

I’m no fan of Lenin.  He was a tyrant who unleashed a tidal wave of misery and evil in the world, but there’s something admirable about the radicalness of Pettigrew, who was so far outside the rotten mainstream of American politics that he could attract and was willing to advertise such praise. And in 1922 it was not yet clear how bad Lenin was, at least from a distance.  As Orwell pointed out in Animal Farm, the communists of the East were not so different from the super-capitalists of the West, but the Bolshevik leader paid lip service to a rejection of plutocracy.  Pettigrew’s book was originally called Triumphant Plutocracy—an accurate description of the Gilded Age and Progressive Era.

Opportunist that he was, Lenin was likely trying to piggyback on genuine populist sentiment in our nation as a means of promoting the new Communist Party USA.  But Pettigrew was the real deal.  His commitment to principle trumped loyalty to party.  He began as a Republican, jumped ship over the currency issue and became a Silver Republican, was briefly a Populist, and ended up as a Democrat.  A Democrat who eventually hung out with socialists.  En route, he backed William Jennings Bryan, William Randolph Hearst, and Champ Clark for president.  He never trusted Woodrow Wilson.

Senator Pettigrew wasn’t a fuzzy-headed idealist lacking experience in the real world.  Nineteenth-century state legislatures didn’t send proto-hippies to the U.S. Senate.  He was a lawyer and real estate developer who helped build his local community by attracting railroad and milling business to southeast Dakota.  In Washington, this realist saw the effects of high-level crony capitalism up close.  It was one reason he opposed imperialism just as the American Empire arose.  He denounced the annexation of Hawaii in 1898.

Pettigrew’s opposition to World War I led to federal prosecution for violating the Espionage Act.  His legal team, led by his friend Clarence Darrow, succeeded in getting the charge dismissed but the fact that an ex-Senate member was even charged—and the same thing was happening to scores of the un-famous—is one of many things that make Wilson the worst president in U.S. history.  I saw the indictment of Pettigrew framed and hanging on the wall of his house.  He stipulated in his will that the indictment must be posted next to a framed copy of the Declaration of Independence.  It still is.  When Republican bosses back home grew tired of his anti-establishment stances, they set him aside.  He spent a little time in New York but returned to Sioux Falls and spent the rest of his life there.

Wilson’s Espionage Act was a bad gift that keeps on giving.  The law sparked landmark Supreme Court decisions enshrining the principle that speech is free except when the government deems it unhelpful (to the government).  Daniel Ellsberg was charged under the law.  Now it’s Bradley Manning’s turn.  Who are the Pettigrews today?  We still need them.

The Letter to Iran and Bipartisan Hype

Of Money and Mouths