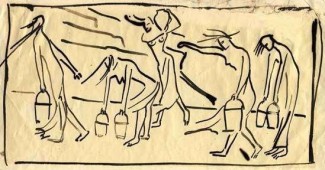 We scrambled up the craterous outcrop

That ruptured like an isle in the gray sands

Half-covering a shallow pool, inside

Which a few snails would slink till the next tide.

Some other aged and rough concentric shells

Hung on a thread of weeds as necklaces hang.

The mussels and the vast Atlantic swell

Lapping away at Innis mór then rang

Of my first time gone musseling in Bar Harbor:

Not knowing such as these and snails were meant

To boil in the gray and white-flecked pot

Adrift on every patterned current or shot

With all the indifference of lead by waves

Breaking against this putty shore—are saved,

Or stranded, really, in a placid pool

No more the ocean for its having come

From there.  Such shells are signs for how it feels

To be on Aran or in Maine.  They sum

Almost to the same place for one like me,

Who visits with scarce responsibility,

For whom the taste of salt mist on the tongue

Is a sure sign that I am far from home.

These sharded terraces of lime are long

From the flat lands I know, though I would know

This dark splintering water in its full

And endless siege on the Dún Aengus shoals.

These sediments, these thickening shells, must seem

For all their subtle mouths and creeping shifts

Proof that no matter where I go, my being’s

Inflexibly one.  This isle may be a gift

Of sorts, but I can’t grasp it whole or take

Just what I need without a sundering break.

Nor can its crooked paths be measured out

As if all were mere property of the mind.

My coming here makes me a part of it,

My sailing makes each cut wave partly mine,

To set against that “awful” sun-bright day

When I dug mussels with my family.

As much I think I’ve known for many years,

Perhaps, though without knowing what that fact meant;

But I don’t have the words to make appear

This place as it is, or more than fake its accent.

However permeable the line between

The self and outward place, desire to be

Some idealized or dreamed-up character

And the cramped, cracked and drifting vessels we

(Driven on by that same desire’s stir)

Manage to make of self and history—

Some outer boundary holds us in its law

Limiting us as a mussel by its maw.

Some children calling out in Irish came

Tearing past us, and splashed on through the veins

Of water inward pulsing with the tame

Grown slick and silver, studded by their heels.

Such was I on the day of that plucked meal,

Before the cagey shells yawned up their meat.

I wouldn’t sit down to that plate again,

Or wish my aging mind were less discrete,

Upon the ribbed and rising sand or broke

I wouldn’t, in fact, attempt a greater change

Than any patient person could attempt:

To map this crescent isle and, stuttering, gage

How close our words and thoughts are—or how inept—

Till, through a plain and patient sort of trying,

Of angled light that hooks off this pool’s mirror

And skips across the waves’ large-muscled toil,

To catch it as it is; and catch the bare

Was deepened, made sufficient to till wheat

By the first immigrants, who in their sweat

Slow-piled sand and seaweed on the rocks,

Year after year, till some stayed covered; then,

They planted, by the fistful, their first crops,

And in a tottering way survived on them.

They too, at first, were strangers to this sand,

And took it as their own with needful hands.

First published in Modern Age Winter/Spring 2013, this poem is from a series on Ireland, history, and the problems of knowledge.  I’ll republish the first in the series in the weeks ahead and the next installments after they have been published in a future issue of Modern Age.