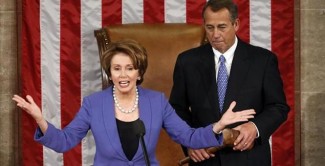 In what passes for political humor these days, Nancy Pelosi has ridiculed the GOP as the “REPEALicans.” She did so in response to the House Republicans’ fortieth vote to repeal ObamaCare, while at the same time not getting much else done. Speaker John Boehner defended his party’s record by saying that Congress “ought to be judged on how many laws we repeal.”In this, the Speaker is absolutely correct; after all, if we want a smaller government, some laws at least will have to be repealed.

However, judged by this standard, Boehner’s Congress is even less successful: they have repealed exactly zero laws. The truth is that repealing laws requires even more legislative skill and cohesion than passing them. In a democracy, by definition, every law on the books has a constituency, and these days that is likely to be a well-funded corporate constituency. Repealing such laws would require both a strong leading ideology and strong leadership; the Republican Party has neither.

This is not to suggest some flaw in John Boehner; rather, the flaw is in the way the House Republicans have defined the Speakership. They have required that their “leader” abide by the “Hastert Rule,” which states that no legislation can be brought up for a vote unless it has the support of the majority of the Republican members. This means that even bills that would easily pass with a majority of Democrats and a minority of Republicans cannot be allowed to reach the floor for a vote; a majority of the majority—that is to say, a minority—controls all legislation. This means that Boehner no longer speaks for the House, but only for a faction within his party; He is no longer the Speaker of the House, but merely the Mouthpiece of a Caucus.

To be sure, the Speaker has violated the Hastert Rule on four occasions, especially when dealing with bills whose failure to come to the floor would make the Party look ridiculous, bills like the Hurricane Sandy Relief measure that lead to the spate with Governor Christie. But in order to insure his re-election as Speaker, Boehner had to promise not to do that again, at least not on anything important and particularly not on the critically important immigration bill. Thus, the Speaker had to promise to speak only when spoken thru.

Hence, Mr. Boehner doesn’t get much respect, not because he isn’t a respectable gentleman and a cagey leader, but because his office has been stripped of all dignity. A speaker who can’t defy his own party, and particularly a faction within that party, can’t be much of a leader and no one need pay him too much respect; he is not in control. But that brings in the question, “Who is in control?”

Here’s where things get murky, since the Party itself is in turmoil. Since its humiliating defeat at the hands of a weak President at a time of economic uncertainty—a time that should favor the “out” party—the Party has dissolved into a set of warring factions, each on a hunt for RINOs—meaning those not in the faction. The result has been a circular firing squad in which nobody has the rule and everybody has a veto. The factions run from the “shut it down now!” group, usually members from safe districts; to Rand Paul Populists, who oppose crony capitalism but haven’t figured out what to do about it; to the neo-neocons, who will do whatever it takes to take power. There is little basis for cooperation among these groups.Washington likes to talk about “bi-partisanship” as the ultimate good, and how the Republicans are therefore the ultimate bad. But the problem with the Republicans is not that they can’t work with the Democrats, but that they can’t work with each other, and hence no work gets done, either to pass or to repeal laws.

Without a legislative agenda they cannot craft a political agenda (and vice-versa.) Hence they enter the election cycle strident in their opposition but with nothing practical to propose, beyond yet another round of tax cuts that benefit a small group and budget cuts that disadvantage large groups. This is not normally a formula for success. So does this mean that the Party faces the same prospects in 2016 that it did in 2012?

We do well to recall that as late as 2006, Karl Rove, the Republican master strategist and calculator, was speaking about building a “permanent (or at least “durable”) Republican majority.” Rove had built a solid, and seemingly unstoppable, political and fund-raising machine. Not only that, but his party was in a position to punish donors who tried to hedge their bets and play both sides; not only were the Republicans fat, but the Democrats were being starved (well, relatively, anyway).  Then came the Great Recession, and the whole house of cards collapsed.  Rove, the great vote-counter, had not counted on the most obvious fact of American political and economic life, the Business Cycle.

Since World War II, the American economy has experienced a recession on average of every six years. This is actually an improvement on the pre-war period, when from 1853 to 1942, the cycle was only four years long. But pre- or post-war, the business cycle remains and no one knows how to tame it. And those who do not count on it get crushed by it. Sometimes the cycle is as short as two years, and once it was as long as ten. But there is always The Cycle.

The Great Recession began late 2007, and if we count forward six years we get to “We’re about due.” And in the normal course of events, it is the President’s party that takes the blame for the recession and normal for that party to suffer at the polls. The inevitable recession works in favor of the outs and helps to account for the rhythms of American politics. It would perhaps be unfair to say that the Republicans are hoping for a recession. Nevertheless, it is the natural for the minority party to play the role of Chicken Little, and if they shout, “The sky is falling” long enough, they will sooner or later be right. And they are likely to be right sometime between now and the 2016, or even 2014 elections.

Ronald Reagan and George Bush were able to keep the cycle going for 10 years, but only thru an expansionist policy that, with the help of a compliant congress, tripled the Federal debt in the largest peace time build-up in our history. But Obama does not have a compliant congress, but one determined to impose an austerity budget, just like Greece. Perhaps some are thinking that the more the country looks like Greece, the better the Party’s chances. And Obama, in another of his “brilliant” negotiating ploys, agreed to give the Republicans everything they asked for if only they would shut-up about the debt ceiling for a few months, the precise months when the last election would be held. Now the time has run out and the sequester is in, and the Republicans feel no pressure to do anything about it. Plus, they get to renegotiate the debt-ceiling yet again with someone who has shown no talent for negotiation, neither with Putin nor with Boehner.

Chicken Little notwithstanding, the sky doesn’t really fall; it just gets a darker. But that can be dark indeed, especially for some people. Given the fact that there was no real recovery from the last recession, or at best a very anemic one, a recession in the short-term could be devastating, especiallyfor the 16 million or so who are still unemployed or have dropped out of the workforce. For them at least, a second recession would be a depression. And maybe even for a wider group; this could be Chicken Little’s best day since 1929.

The Democrats seem to be caught in a trap. Even if they had a plan, they could not implement it. They can only hope that either the recession will be postponed or that the public will not hold them accountable. The former seems a fond hope at best. But have they any hope for the latter? The question is, “Which Party will the public hold responsible?” Note that the question is not, “Which Party is responsible?” Whether blame for the business cycle can be assigned to one party or to anybody in particular is not the issue; the issue is one of public perception. Public perception revolves around which account of the crisis the public is likely to believe. Normally, the most plausible account is that the Party in power is responsible, but in an era of divided government, this is no longer clear.

The problem is not that this is a “do-nothing” congress; that might actually be an improvement. The problem is that they are seen to be bunch of do-nothings. As such, they run the risk of “Truman-izing” themselves. In 1948, President Truman was running for re-election in the midst of a recession. The Republicans had taken control of the House and Senate in 1946, and Dewey seemed to be a shoe-in for the presidency. But in July, Truman called the Congress into special session, sent them a bunch of bills they couldn’t pass, and then ran against the “do-nothing congress.” Along the way to re-election, he collected the greatest political souvenir ever, the “Dewey Beats Truman” headline In the Chicago Tribune.

It didn’t have to be that way; the Republicans could have turned the tables on Truman by passing their own economic agenda and sending it to the White House. Then Truman would have been in the position of vetoing it all, creating the plausible story that he was delaying the recovery. In this way, perhaps, they could have made an honest paper out of the Tribune.

To build a plausible story, the GOP needs a plausible agenda. But lacking a ruling ideology, they cannot devise a legislative agenda; voting forty times to repeal ObamaCare is not actually an agenda, and the whole thing has long since passed the point of grand-standing to become political comedy. What they might have done, and what they can still do, is pass 40 amendments to the Affordable Care Act laying out their own plan. The House could pass the laws now that they intend to pass when they come to power; they can repeal the  laws now that they feel must repealed. They can let the country know what their agenda is in specific legislative terms.  True, the Senate would defeat all such bills or the President would veto them, but then the onus would be on the Democrats. As it is, the Republicans are giving the impression that they just don’t care about the uninsured, or high medical costs, or indeed about anything; they may merely convince everybody that they really don’t have a plan, or at least not one they are willing to share with the public.

If the Republicans are relying on a failure for Obama’s policies, they may find themselves blamed for those failures. And if they pass nothing positive, they run the danger of validating the parody of them as “REPEALicans.” They have a great opportunity state their positions legislatively and change the game in their favor. But once again, they seem determined to snatch defeat from the jaws of victory.