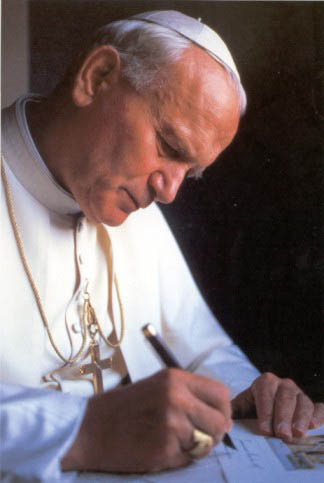 For these revisionists, sometimes terms proportionalists or consequentialists, “right” and “wrong” are divorced from “good” and “evil,” since they hold that actions can be judged right/wrong insofar as the constitute a desirable state of affairs in the world while good or evil refer not to actions but to the person’s intention in acting. A person may have a good heart when doing a wrong action, or an evil will in doing a right action, but since actions are not themselves good or evil there can never be an intrinsically evil action—so long as the person has a habitual desire for the world to be better (understood in quasi-utilitarian ways) their action is not evil per se.

John Paul II believes this to be a serious error, one which not only eviscerates the basis of Christian moral teaching but also persists in its dissent from the Church.

In fact, a new situation has come about within the Christian community itself, which has experienced the spread of numerous doubts and objections of a human and psychological, social and cultural, religious and even properly theological nature, with regard to the Church’s moral teachings. It is no longer a matter of limited and occasional dissent, but of an overall and systematic calling into question of traditional moral doctrine, on the basis of certain anthropological and ethical presuppositions. (4)

In response, John Paul II articulates a profoundly theological response, rooted in the nature of Christian revelation but also in moral philosophy, particularly a philosophy of action. In keeping with his pre-pontificate work in ethics, he articulates how actions involve the agency of the whole person, not just consciousness or “heart.” When I act, he says, the object of my choice must be understood from the “perspective of the acting person,” a perspective in which an action is right or wrong insofar as my will is good or evil in what I intentionally choose.

An example may clarify. For proportionalists, the infamous actions of the Nazi collaborator Paul Touvier, who claimed that his assisting in the killing of seven Jews in order to save ninety-three more meant that his action was right because the state of affairs he desired was the saving of ninety-three people, which is a good desire with right results. Not so, the Pope responds, for what was chosen was the direct killing of seven innocent people, with an ulterior desire of the ninety-three saved. But choosing the direct killing of innocents is an intrinsically evil act, if one understands the nature of choice, the nature of action, and the complete integration of the human person in their acts. In so choosing, Paul Touvier became evil, and his actions could never thus be right.

The point here is not the intricacies of Thomistic action theory but the significance of Veritatis Splendor for those of us doggedly holding on to place, limits, and liberty as both constituents and conditions of human dignity. (Conditions in that they are required to bring about dignity; constituents in that they make up, or constitute, in part, dignity itself.)

We live at a time when consequentialism governs every aspect of human existence, tyrannically claiming authority over everything. Not just those matters where efficiency and results have a proper place, but over the humane realities as well. Sex. Family. Marriage. Health. Property. Community. Faith. Education. All must bow before the calculators and weighers of worth, all must kneel before “objectivity,” however ignorant they are of genuine value, of the first and permanent things, of that which matters most, of those things which are intrinsically good or evil. Their ignorance is matched only by their appetite to control, and they are destructive to their core.

In addition to the content of the teaching, Veritatis Splendor reveals valuable truths for us in how it teaches, in the manner it proclaims. Keeping with his earlier work, John Paul II places himself firmly within the limits of tradition, turning ad fontes, to the sources of faith, both in the Scriptural revelation of Christ and to the ongoing tradition which remain ever ancient, ever new. But he is unafraid to rise to the level of his time, borrowing heavily not only from the patristic and medieval sources but also, although not uncritically, from modern philosophy, particularly phenomenology.

Carefully, with patience, his work (see The Acting Person or Man in the Field of Responsibility) maintains that the metaphysical account of Thomas Aquinas is both true and necessary for ethics, as the tendency towards starting with “pure consciousness” (the human as if they were mind alone) endemic to modernity forgets the way that humans are, which is embodied intellects which act. At the same time, he suggests, and this is not without its detractors from within Catholicism, that the metaphysics of Aquinas are not fully adequate to articulating and grasping what makes us persons, for persons are able to grasp themselves only in their own concrete actions as irreducible individuals, but the tradition tends to describe us through our universal and essential traits, like rational animality. However true, and however necessary such descriptions, they do not give me to myself as the “I” which I am, and thus they do not completely explain or ground dignity.

In keeping with the old, he incorporates the new so as to complete the old. But all within the limits and standards of the ongoing tradition, and without infidelity or trace of dissent.

I tend to avoid language of “war” or “battle” when thinking about our cultural moment. Genuine conservative thought, I take it, alternates between the irenic and the mirthful, the poetic and the tragic, but finds rationalistic demands for perfection and the various tactics and stratagems of “culture war” to be almost perfectly liberal in commitment. And yet, we are involved in a struggle which feels to be of cosmic dimensions. Just as John Paul II’s life involved direct encounters with the Nazis and Stalinists—here was a man who knew that the culture of death was tyrannical—and yet responded with discourses on married love and the self-donation of ourselves to others, so too the encroaching peddlers of utility (that is, the agents of death) steadily engulf our little homes and shires, and they would appear to have no plan other than total victory. We too are in a struggle, and one which is ultimate.

The Splendor of Truth rose to the level of its times by resolutely turning to the tradition while articulating its truths in the level of its time, using, without capitulation, the best tools available. Do we do the same? Does our commitment to the truths of tradition leave us open to embracing that which is lovely and needed from our own time? Or do we risk a sort of crankiness and curmudgeonly romanticism in taking positions which cannot be lively, which are ideological in refusing to dwell in the world we have but long for some imagined past?

Traditionalism always risks flaming out; vanishing into memory after one powerful burst of protest. But fences need painting from time to time to stay sound, just as houses need remodeling to remain bright and cheerful places. It is a particular duty for us, I would suggest, or for those of us who wish to retain the permanent and humane, to cultivate the discipline of remaining open to the best of the new, to remain ever youthful in our hope.

In that respect at least, John Paul II was fully virtuous, so much so that Veritatis Splendor is as dynamic and engaged at twenty as when it was written. I wonder if the same will be said of us.