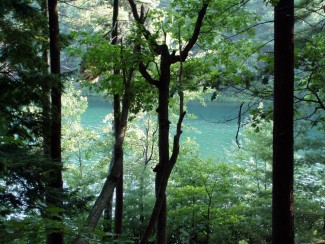 This is an entry in FPR’s One Thousand Words series. Over the next few months, perhaps longer, several dozen contributors will tell us what we need to know about a wide variety of figures—some obscure, some not—in one thousand words or less. Forthcoming: posts on Dwight MacDonald, Mozart, Chekhov, Foucault, Leo Strauss, Paul Gottffried, Charles Taylor, Irving Babbitt, Bernard Lonergan, Machiavelli, and many more.

Thoreau can try your patience.

He has a fine mind, and when he trains the light of that mind on a person who thinks at a different, usually slower, speed he is too often inclined to laugh at that person’s expense. Upon being invited by an Abenaki guide to speculate on how a hunter could have killed a cow-moose as big as Mt. Kineo, which looms over Moosehead Lake, Thoreau winks at his reader (“whereupon a man-of-war to fire broadsides into her was suggested, etc.”), and then mercilessly joins mirth to summary judgment of the guide’s attempt to retell the Abenaki myth explaining Mt. Kineo’s shape: “An Indian tells such a story as if he thought it deserved to have a good deal said about it, only he has not got it to say, and so he makes up the deficiency by a drawling tone, long-windedness, and a dumb wonder which he hopes will be contagious.”

The racist aspects of that remark are not entirely atypical, for in addition to Native Americans Thoreau was prejudiced against Irish immigrants and Catholics in general. But the main way in which Thoreau irritates is his unthinking dismissal of “commerce” as a platform for the cultivation of genuinely human life, his customary blindness to the idea that “wildness,” so called, might include agriculture as well as life-forms on unvisited mountain peaks, and his uncritical acceptance of the tremendously destructive nature v. civilization dynamic that had recently energized the growth of the trans-Allegheny West.

And I haven’t even gotten to his fondness for yoga, flute-based music, Basmati rice, and elfin spirits that “recline on sunbeams.”

Suffice it to say that many if not most contemporary readers of Thoreau reach a point where they are inclined to throw his entire corpus out the window.

Usually, it is fear of rashness, for most people never actually read ubiquitously anthologized works like Walden and Civil Disobedience.

Here, though, an opportunity arises. In the wink of an eye belonging neither to themselves nor to Thoreau, readers can become intrigued by what Thoreau might have said to earn a place on the Modern Library roster of giants. Having made a decision to chuck Thoreau entirely they are suddenly free to pick up Walden or Civil Disobedience as though the manuscripts were messages in a bottle. And after that tipping point is reached, hair usually starts to stand on end, for it quickly becomes clear that Thoreau’s pedantry and Yankee practicality and best instincts are each of them in the service of a most wondrous end, which is to report how heaven works, via a detailing of its cogs and gears and nuts and bolts.

The wild, in Thoreau’s writings, doesn’t just refer to “forest uninterrupted,” or country “not yet settled.” Ultimately it refers to a place of moral summons and abundant meaning and verbal underpinning that is referred to, variously, as “upriver,” “brine,” “the eye of the world,” even (to the extent incarceration is unjust) “jail.” And when he speaks from that wild place—as he does most triumphantly in Walden and Civil Disobedience—Thoreau winds up redeeming our entire American project, let alone the seemingly more modest ones he undertook in the Maine woods, on the beaches of Cape Cod, and outside Concord, close to Walden Pond.

Take “The Allegash and East Branch” (of the Penobscot), Thoreau’s most mature “travel” book, where we are invited to glide down a glassy river that presents as “a regularly inclined plane.” (Thoreau worked, off and on, as a surveyor.) Here, almost every single one of Thoreau’s uncritically assumed dichotomies is eventually transposed and enabled to sound in unanticipated senses. Instead of disdain for “civilization,” we find localized cultural artifacts like word clusters noted as dutifully as resinous pitch pockets and white-throated sparrows, and instead of disdain for how “the street” sullies Nature’s temple, we find sympathetic studies of timber merchants waiting for a “freshet,” and hustlers who cut hay on every possible rush-grass island meadow so that they can make a killing from loggers whose oxen will need fuel, come winter.

It’s a wise, dare I say “settled,” book, yet the source of that bracingly settled aspect is the set of field notes called “Ktaadn” (written during Thoreau’s stay at Walden Pond), as well as Civil Disobedience (written two years after). In “Ktaadn” a friend cries out that “the world is on fire” upon witnessing a fir tree ignite, and Thoreau himself likens the summit of Maine’s highest mountain to “raw materials of a planet dropped from an unseen quarry,” before becoming frightened (indeed, scared out of his wits) by the stunning reality of extant things—of being: “Daily to be shown matter, to come into contact with it – rocks, trees, wind. The solid earth! The actual world! Contact! Contact!”

As for Civil Disobedience, that is the book where Thoreau explains (with ripping, unanswerable clarity) how to disable a “tyranny of the majority” and thus preserve a Union in which—as Thoreau himself conclusively demonstrated on July 4, 1845 (the date he began his Walden project)—every man has access to the same kind of contemplative leisure that Plato and Aristotle knew.

Needless to say, there is more going on here than de-activating a Facebook account or starting a program called Simple Living.

Thoreau is our one, absolutely indispensable American man of letters. He faces east! I don’t mean he looks toward India. Rather, I mean he’s a watchman for morning—which is to say, for the human person and things blazing with there-ness. Given that we Americans now live in a counterfeit world of Anthropologie-anchored “villages,” genetically-engineered “nature,” and ersatz bit-driven “literacy,” the good news that Thoreau sends is most welcome.

It amounts to just six words (spoken after finally sounding the pond on whose rim his hojoki-like hut was built): “There is a solid bottom, everywhere.”

Will Hoyt used to be a carpenter in Berkeley; now he builds housing for oil/gas crews tapping the Utica Shale, in eastern Ohio.

The Dirt on Resilience