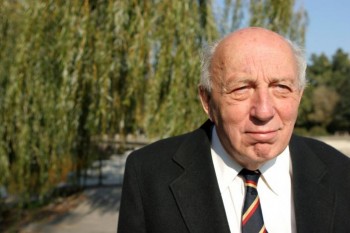 John Lukacs (1924-) is one of the last great narrative historians, to be numbered among Jacques Gibbon, Jacques Barzun, George Kennan and Samuel A. Huntington. Lukacs wrote more than twenty books, erudite histories but ones that were accessible to the wider public, without paying much attention to academic fashion, as well as numerous essays and reviews.  His books on the Second World War, for example, such as Five Days in London and May 1940, remain essential reading for his portrayal of the stakes at issue and the impact of individuals (most preeminently Winston Churchill) on events.  His reflection on historical thinking, Historical Consciousness, is a classic.

Now in his eighties, Lukacs came to the United States from Hungary in 1946 as a young man fleeing the emergent Communist bloc.  He found a home in a small college in Pennsylvania, where he remained, deeply rooted to the institution and served as chair of its history department from 1947 through 1974. He has written a discerning book about his adopted city, Philadelphia, as well as a book about Budapest in his native land.  This dual heritage – a connection to the perhaps less well-understood eastern portion of Europe and his devotion to the Anglo-American civilization he found in the United States, explains some, but not all, of his scholarship (his strong defense of Winston Churchill, for example).  Lukacs, who calls himself a reactionary, often has exasperated other conservatives; he penned a sharp review, for example, of Patrick J Buchanan’s book on Hitler), and has been sharply critical of American intervention abroad. At one point he even styled himself an “anti-anticommunist,” attributing Soviet aggression not to Marxist ideology but to deep-seated features of the Russian national character. He was one of the few who believed Russia was always too weak to win the Cold War.

In 1990 he published his first “auto-history,” called Confessions of an Original Sinner.  this was followed in 2009 by the second installment, Last Rites. An auto-history is different, for Lukacs, from an autobiography. The former is focused on thoughts and beliefs; the latter is primarily a chronological story of a life.  This distinction is just one of many in Last Rites, reflecting the Lukacs’s careful ear for the nuances of language.  A “fact,” for Lukacs, is qualitatively different from an “event;” the latter term is fused with human observation and the notion of time’s passing.  Nor is historical “detachment” the same as “separation,” which is impossible in history, for we are never separate from how we choose to think about that past.

Lukacs is perhaps best known for his conviction that history is “participant,” and for holding that the barrier set up by Enlightenment thinking between subject and object is an illusion.  History is not concerned with attaining objectivity, but in seeking understanding.  “The ideal of objectivity is the total, the antiseptic separation of the knower from the known.  Understanding involves an approach, that of getting closer. In any event, and about everything there is, there can be no essential separation from the knower and the known.” Drawing on his lifelong engagement with the work of the physicist Werner Heisenberg, Lukacs finds even scientists improperly focused on false “facts” in creating an illusory objectivity.  For what makes a scientific fact at all of interest is because we are there to observe and understand it, and as Heisenberg taught, our very observance changes the observed event itself.

This may seem simply postmodernism in another guise, but that would mistake Lukacs’ point.   All does not dissolve into subjectivity.  Because we are historical beings, our understanding of the past must be a deeply moral and humbling enterprise.  Humans “invested” the universe, according to Lukacs, with meaning.  We remain at its center, and are responsible for what we do with it.  “The universe is such as it is because at the center of it there exist conscious and participant human beings who can see it, explore it, study it.”

Like Kennan and Huntington, Lukacs writes in defense of a lost world, what he calls the Bourgeois Age, which has now passed.  That age was rooted in European civilization, finding one of its highest expressions in England and America. Populism was its downfall – like T.S. Eliot and Christopher Dawson, Lukacs knows each age has its gods; in the current democratic age, elites worship, and answer to, the mob. These elites use and are formed by mass media; like Russell Kirk, Lukacs was a cultural diagnostician, identifying the emergence of new social forms in place of the traditional Western heritage.

This European civilization will be no more, but its passage too is part of history. Lukacs’s works are essential tools to understand that passage.