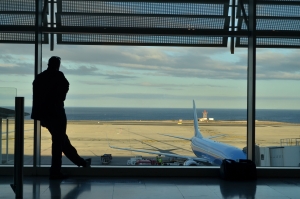 As I write this, Edward Snowden is moping his way through exile in the Moscow airport. He can’t leave because crossing through passport control would mean legally entering Russia, and a diplomatic fracas would ensue. So he sits, amid the plastic furniture and shuffling travelers, within the borders of Russia but beyond outside its polity. It is, of course, absurd to believe that he is really beyond the reach of Russia’s laws. Vladimir Putin has never been inclined to let actual national borders stand in the way of his agents, so the legal fiction of an internal border at an airport is certainly not preventing him from moving against Snowden. However, there is something oddly true about the argument that the Moscow airport is not in Russia.

Here in America, you’ve probably had a connecting flight through a city you’ve never visited. You get off the place, walk from one gate to another, maybe stop for a Cinnabon, and then climb on the flight to your real destination. Later, when someone asks if you’ve visited the city of your connecting flight, how do you respond? Yes? No? An awkward smile and “well, I’ve been in the airport?”

For instance, I’ve had connecting flights in Salt Lake City, but I’ve never been outside the airport. I wouldn’t say that I’ve been to Salt Lake City. Why is that? I’ve been within the city limits, just like Edward Snowden is within the borders of Russia. The best explanation I have is that airports are not places. They are non-places, extreme manifestations of modernity.

The airport exists for the sake of air travel. Now, I have no burning criticisms of flying qua flying. Indeed, sitting down with a good book and having a waitress bring me a glass of Wild Turkey is a great way to pass a few hours. However, the web of flights that cross over our country creates a set of very modern problems. How can an airport get thousands of individuals onto the correct flight? How can these disparate travelers be moved to their aircraft safely, cheaply, and above all efficiently? How can they be entertained in the time it takes to organize them? The airport employs the techniques of scientific management, supervised by the omnipresent state, in order to sort the planes’ human cargo before take-off.

The geography of the non-place begins at the entrance. As soon as a man enters the airport, he is transformed into a traveler. His orientation to his surroundings is now based entirely on movement; not only is he deracinated, the possibility of putting down roots is foreclosed by his motion. No one entering the airport can experience it as a place to belong, but merely as a conduit to move through. A visitor to a foreign city may feel a vicarious sense of belonging watching the locals, but a traveler in an airport will never hear even the echoes of community life, because constant motion is the order of the day. Architecture reflects this, with long galleries dominated by moving walkways and escalators. Since everyone moving through the airport is equally unconnected to the space, they remain unconnected to each other, passing like airliners in the night.

After entering the airport, the traveler checks in and receives a boarding pass. The bar code on this document is the key that permits the traveler to move through the circles of the airport. It is also the digital mark that follows the traveler, allowing them to be monitored and sorted by the benevolent eyes of the state and the airline. Corporate and governmental power are woven together in the airport, with the traveler’s status as customer and subject frequently overlapping. The boarding pass, purchased from a private corporation, is the interface between the individual and the security apparatus, manifested in the TSA. This makes the modern airport the ideal transit hub for Belloc’s servile state.

The impossibility of community in the airport necessitates this security apparatus, just as it does elsewhere in the modern nation. Because travelers cannot trust one another, and because there exists no cultural mechanism for inculcating and enforcing virtue, the police power of the state must be brought to bear. In the anonymity fostered by the deracination endemic to the airport, is impossible to know if the traveler behind you in the security line is drug trafficker, a terrorist, or a fugitive from justice. In case you were tempted to trust this stranger, a disembodied voice will remind you it is illegal to watch your fellow traveler’s bags. Therefore, a plethora of armed government agents must maintain order.

The focal point of airport security comes at the x-ray machines. Here the travelers approaches the eye of Sauron, and let its gaze pierce through clothing, skin, and bone. First, the travelers place their bags on the conveyor belt, followed by their belts, wallets, jewelry, and shoes. Next, they advances barefoot, like the supplicant King Henry IV trudging through the snow to Pope Gregory. Then, raising their hands in surrender, the back-scatter x-ray machine washes through them. In a building dedicated to annihilating distance, marked with a document that has annihilated their personal identity, the x-ray machine annihilates their faces, their clothes, and the entirety of their form. Moving through the X-ray, the travelers have very right to proclaim with Eliot that “We are the hollow men/We are the stuffed men/Leaning together.”

After being subjected to the total gaze of the state, the travelers hurry to collect their effects from the conveyor belt. Rushing to put their shoes on before the next subject of the surveillance assembly line arrive. Harassed, harried, alone, and deemed innocent, they are the perfect modern non-residents of the modern non-place.

Upon entering the innermost circle of the airport, the traveler is nowhere. Cool air shuffles slowly, driven not by the wings of a giant demon surrounded by traitors, but by a silent and sprawling air conditioning system. Other anonymous travelers shuffle past. The travelers here are arriving from disparate cities, each with their biological clocks set accordingly. In their various degrees of jetlag, the non-citizens of the airport do not share even a common experience of time’s flowing. Wandering in their isolation, what do travelers see?

Bright screens with crisp images display reams of times, flight numbers, and cities: Tokyo, Paris, Nairobi, Cleveland. These tables change constantly, reading out new instructions for the travelers watching them, as the configuration of machinery and services at the terminals shifts. The modern economy is hear in full force, with beautiful graphic design conveying constant creative destruction to eager consumers.

As travelers shuffle along the ley lines laid by these screens, they see various chain restaurants beckoning them. These are the fastest of fast food, heavily processed and unhealthy meals, sourced from factory farms scattered across the world, treated with sodium and high-fructose corn syrup until palatable. McDonald’s is perhaps the most ubiquitous of these chains. A traveler can step to the counter and receive the same burger and fries whether he is in Seattle or Savannah, and never have to trouble his thoughts or his emotions with a genuine gustatory experience. This is food for the stomach, and for no higher part. Indeed, McDonald’s newest advertising campaign seems cynically calculated for to appeal directly to the appetites: “Think with your mouth.”

Suppose the traveler does not want to spend his money on food. Surely he must spend his money on something while he waits. Knick-knack shops abound in most airports. Here, a glimmer of place is visible. These stores sell souvenirs meant to reflect the character of whatever town the airport is planted in. A t-shirt with a cute local saying, a shot glass with the city skyline, or other any other bric-a-brac locally imported from China. These are Baudrillard’s simulacra of souvenirs, imitations without an original. These trinkets reduce place to a commodity, and offer it to travelers drifting through the non-place of the airport.