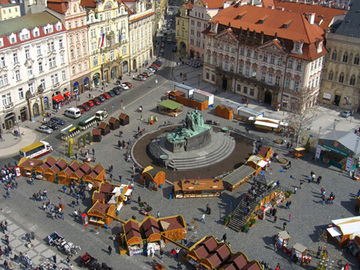 Politics on a Human Scale: The American Tradition of Decentralism.

On occasion a political book emerges with such a wealth of information and evidence of discernment that it alters the way an institution is studied or a policy field is understood. This prospect is plausible as its regards Jeff Taylor’s new book on the tradition of political decentralism and community in America as shaped by political party activity.

For three-quarters of a century, America has been swept along in a current of national administrative and social policy centralization—a countercurrent to the country’s earlier preference for decentralized, state-level policymaking.  At the behest of national special interests with their encompassing political agendas, policy centralization has raised both the stakes and  spending in national political affairs.  This ‘winner-take-all’ nationalized policy environment has contributed to a legislative polarization that mismatches public policy initiatives to the preferences of the general electorate, especially when unified party government holds sway.

Gone are the days when divided government produced expressions of bipartisan governance.  With the legislative middle hollowed out, and a decent respect for the autonomy and self-determination of communities at low ebb, there is little but conflict on the political horizon.  Indeed, national pressure for a few faddish brands of diversity threatens the prospect of self-realization for individuals seeking traditional social norms on a communitarian basis.

Traditionally, federalism made it possible for people to vote with their feet.  If, for example, the rewards of public policy were concentrating benefits to the few in a particular state, while widely dispersing the costs to the many, the disaffected many could vote with their feet and congregate in another state so as to become the jurisdictional majority, thus reaping on a non-exclusive basis the benefits of majoritarian democracy (within the policy purview allowed by the federal constitution).  Unfortunately, the democratic liberty that sprang from decentralization fell into disrepute when the South misused federalism to evade their region’s responsibilities for the equal advancement of all citizens.  As the book makes evident, there is a good deal more to learn about decentralization than can be extracted from its errant episodes.

Jeff Taylor, the chair of a political science department at a private college in northern Iowa, successfully shifts the focus on federalism from its institutional moorings to the way it was scuttled in the Twentieth Century by party politics gone astray.  In this respect, the book is unique.  What one learns by thinking about decentralization through the lens of political party evolution is that the rush for electoral advantage in building national coalitions came at the cost of sacrificing a good deal of liberty and sanity.  Most critically, the hunger for power and national scale led to a forfeiture of politics on a human scale: the politics of decentralism.

Nowadays, we have 315 million Americans spread across 3.8 million square miles of American territory.  Oddly, the higher the population and wider the range of policy preferences, the more intense the push becomes to settle on one brand of economic justice, one approach to health care, one ideological conception of best practices, and one oversized approach to national defense.  Lost in this cacophony for centralization are the sober voices who remind that symbolic diversity in the face of considerable constraints upon community autonomy is a hollow pursuit.

If Jeff Taylor’s book was merely a retelling of the benefits of federalism, it would have less value.  Political scientists like Thomas R. Dye have already made the case that federalism—rooted in multiple, independent governments with considerable responsibility for the welfare of people within their jurisdictions—protects important political values such as individual liberty, pluralism, party competition, political participation, and the management of conflict (American Federalism: Competition Among Governments, 1990, 175).  While Taylor’s book addresses these considerations, it is much more focused on the idea that decentralization helps nourish attitudes, understandings and relationships that are central to real human flourishing.

Beginning with his own agrarian-oriented experiences in the part of Iowa with “the darkest, richest black dirt,” Jeff Taylor gives decentralization a socio-political quality that other writers fail to adequately convey (18).  Carefully avoiding abstractions, Taylor builds a compelling storyline by focusing upon the philosophies, attitudes and actions of important politicians and party leaders in American history.  Repeatedly, he offers instructive connections or comparisons across parties, ideologies or time.  For example he depicts Idaho’s Senator William Borah as an individualist who opposed all concentration of power, whether political or economic, in contrast to Franklin D. Roosevelt who had “no instinctive appreciation of American liberalism in its oldest and most authentic sense” (122).  In respect to H.W. Bush, the president demonstrated “the same ideological program possessed by Dewey, Eisenhower, and Rockefeller” (315).  Regarding Ronald Reagan, Taylor avers that if the president paid more attention to the conservative values of LaFollette and Taft, “he might not have staffed his administration with Nixon retreads and Rockefeller allies” (468).  Strikingly, Ron Paul is linked to the isolationist foreign policy of Robert Taft, the decentralizing domestic policies of Barry Goldwater, and the laissez faire economic sentiments of the Austrian school (519).  From a multitude of angles, Taylor links political actors with the evolution of the decentralization debate, thus creating a memorable storyline.

In linking federalism to a “quadratic persuasion,” Taylor advances the notion that decentralization facilitates a valuable equilibrium.  This quadratic persuasion combines elements drawn from four perspectives: populism, libertarianism, communitarianism and conservatism (with its traditional morality).  This political balance enriches the human experience and transmits wisdom for societal development.  Call it a sense of proportionality, decentralization puts governance, agenda making, and policy goals on a modest scale that reduces the temptation for irresponsible overreach and coercion.  It makes politics more personal, incorporates a greater degree of friendly collectivism, and invites people to engage their neighbors on the front porch of moral reflection.  In short, decentralization nourishes a favorable political cultural and more promising ‘spirit of the times.’

While some writers address issues by means of theoretical abstractions or surrogate models, Taylor avoids artificial constructs in examining federalism.  Aided by a comprehension of both historical and current party politics, he provides hundreds of insightful details about the migration of both the Democratic and Republican parties away from decentralism as a core political value.  Along the way he surveys the Agrarian value system, observes the psychology of several states’ rights nullification movements, casts light upon partisan struggles over the philosophy of governance, and examines the hijacking of Ronald Reagan’s decentralization initiative.  One cannot find another narrative so informative for probing these matters.

Serious readers will like the fact that the book’s observations are lavishly documented with some 1,200 chapter endnotes and 500 bibliographical sources—a matter noted in the book’s Foreword by former Congressman Glen Browder (D-AL).  Beneficially, the writer provides a multitude of contextual details in the endnotes.  For example, following chapter three, Taylor reluctantly cites Adolph Hitler at some length on federalism vs. centralization.  The quotations from Mein Kampf provide a chillingly clear picture of how Hitler saw German federalism as a major impediment to his designs, consolidation of power, and a reordering of the lives of Germany’s people (83).  As Taylor observes, “Beware of false messiahs who peddle their wares of national salvation and global utopia.  That is the way to regimentation and genocide” (11).

The book is packed with elegantly developed historical observations and erudite observations.  Consequently, by the time one reaches the book’s bibliography on page 557, the big challenge is organizing the information now at one’s fingertips.  The author could have cited more books on federalism.  But what end would it serve?

After finishing Politics on a Human Scale, this reviewer took a fresh look at three of political science’s most widely celebrated books on federalism: Vincent Ostrom’s 1991 work, The Meaning of American Federalism: Constituting A Self-Governing Society; former Harvard Professor Samuel Beer’s award-winning book, To Make A Nation: The Rediscovery of American Federalism (1993); and Forrest McDonald’s landmark book, States’ Rights and the Union: Imperium in Imperio, 1776–1876.  Interestingly, none of the three seemed as informational and useful as Taylor’s work.  Indeed, one of the most highly regarded new books on federalism, David Brian Robertson’s Federalism and the Making of America (2012), is clearly an incomplete telling of federalism’s story without the inclusion of the party-salient material that Taylor competently unpacks in his book.

While the foregoing assessment is perceptual and subjective, it is nevertheless based upon the observation that Taylor examines federalism not merely as a constitutional institution or byproduct of state jealousies, but as a necessary outworking of innate human needs.  Decentralism’s benefits outweigh its costs not merely because of political expediencies or utilitarian objectives, but because decentralism—in the context of a prudent culture and sound national constitution—compliments human nature.  A decentralized approach to governance helps us realize our best selves.

All things considered, Jeff Taylor provides the best available account of the varied ways partisan interaction and electoral competition shaped decentralism’s development and subsequent demise in America.  Now that we are better positioned to comprehend how decentralism fell on hard times, and how its decline complicated the prospect for American cultural flourishing, we are empowered to make headway toward Politics on a Human Scale.

Timothy J. Barnett is associate professor of political science at Jacksonville State University.  He holds degrees in marketing and theology, an MPA from Boise State University, and a PhD in political science from the University of Kansas.  He is a former president of the Alabama Political Science Association and has written on legislative politics, constitutional federalism, monetary policy, and freedom of religion. Dr. Barnett’s latest book is entitled America’s False Recovery: The Coming Sovereign Debt Crisis and Rise of Democratic Plutocracy.