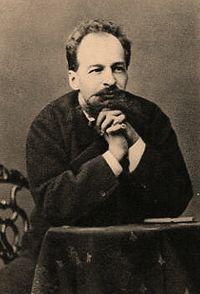 Berwyn, PA. Everyone knows G.K. Chesterton’s aphorism that, if a thing is worth doing, it is worth doing badly.  Dappled Things writer Karen Ullo has deepened our understanding of that truth in a new personal essay, where she reflects on the inevitably indirect and wayward, but no less real, ways a mediocre and forgettable artist can play a pivotal role in the life of culture.  She writes of her hearing a performance of Mussorgsky’s Pictures at an Exhibition, at which she learned of the piece’s unpromising origin in the paintings of Viktor Hartmann and what it has to teach us about the life of a tradition:

Maestro Sebastien Lang-Lessing showed slides of the existing Hartmann works during his presentation, and the program writer was quite justified in calling them “forgettable.”  The only reason Hartmann’s work did not die is that Modest Mussorgsky, a man of much more memorable talents, happened to attend a posthumous exhibition of his friend Hartmann’s work, which inspired him write a piece for solo piano.  Several decades later, that piece caught the eye of the brilliant Maurice Ravel.  Ravel was not the first to orchestrate Mussorgsky’s work–over a dozen composers have tried their hands at that task–but Ravel elevated Pictures at an Exhibition into the canon of established symphonic music, creating something that professional symphony conductors think worthy to lecture about to an audience of children.

It took three men in two countries more than forty-eight years to create the half-hour of music I enjoyed on a different continent, in a different century, through the intercession of an actual hurricane.  Somewhere in St. Petersburg in 1873, a butterfly flapped its wings.

The improbable sequence of events that led both to the creation of Pictures at an Exhibition and to my having heard it in the exact context that inspired this post will seem to some as evidence of the randomness of the universe, to others as proof that God always has a plan.  For me, however, the lesson is simply this: Viktor Hartmann did his best.  His best could never put him in a class with contemporaries like Manet and Gaugin, and I guarantee that when he sat down to paint “The Hut on Hen’s Legs,” he had no notion that a Frenchman not yet born would someday use it as the backdrop of an orchestral work that would endure for centuries.  Hartmann sat down to paint it, nonetheless.

It so happens that I count myself among the world’s mediocre artists.  I am a singer and choir director working in a humble parish church.  Someday, my voice and my arms will die with me, and this music stuff I have been slaving at for decades will become nothing more than fodder for my obituary.  The odds that I will inspire some greater artist to create something lasting are pretty slim, but I have, at least, been known to inspire smiles.  I have taught a few people to improve their craft, and, most importantly, enriched a few prayers.  It is enough.

For my part, I count myself as a mediocre poet, one who hopes that on a few occasions in my life serendipity may still strike and lead me to produce something great.  But even should that not happen, I would keep at the trade of rhyme and meter, remembering as I go Timothy Steele’s wise words, “As true as it is that meter alone will never produce fine poems, even a poor poet who writes in meter keeps alive the tradition of versification.”

Sometimes, the first expression of an art form will become also its classical realization.  There are other great epics, but almost  no one who can bear to read epics would choose any of them over the two we have from Homer.  More often than not, the potential of an art form takes generations to find adequate realization.  That was certainly the case with airplanes and automobiles, as it was the case with the sonnet: a fact perhaps made the more remarkable when one considers that there were far more people working at sonnets in sixteenth and seventeenth century Europe than have ever worked on the engineering of cars and planes.  But, greatness aside, things are as good as they are real.  To keep alive a tradition, to continue to produce mildly good poems, and reasonably memorable concertos, capable of rousing the ear and the mind to attention, thought, and pleasure — these things are good in themselves.  To perpetuate a traditional practice enriches the storehouse of being while also stitching together the eternal society of the dead, living, and those still unborn in such a way that past, present, and future remain habitable places, where human voice can still hear and answer human voice.  It keeps words, habits, and techniques in common, it cultivates, tempers, and preserves a climate of opinion, whatever the other storms of history.

Mediocrity makes visible something about tradition that greatness can often obscure.  It is one thing to say, for instance, that the West possesses a valuable tradition because, within it, we find a sampling of awesome geniuses, from Homer and Plato, to Dante, Shakespeare, and Nietzsche.  But this hardly explains the value of tradition.  Traditions are self-authenticating.  They are good in themselves.  To live within and participate in a tradition is, again, to keep something alive and to draw things and persons together, across time, in a community of knowledge and love.  The second-rate imitator of Keats in Kentucky, the belated composer of an oratorio in Ohio, may seem derivative, as if merely preserving the shadow of greatness in amber.  But, to the contrary, they take their place in a way of being and keep that way open for others to tread.

Authors’ names not withstanding, art, technology, and science, the whole world of work and culture, are starkly impersonal enterprises.  The anonymous mediocrity, no less than the legendary maestro, gives his life in the service of keeping a tradition alive; in being himself forgotten he helps something else to be remembered. What a blessed thing to do.

Confucius–A Man for All Seasons