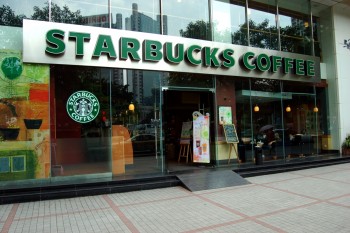 For several decades now, the business plan of fast-food chains has been to build restaurants with a similar design: a drive through around the back and side, an indoor playground in front, parking spaces surrounding, a counter to order food at, a counter for napkins and lids, tables along the walls. The similarity is even more pronounced when you look at the materials. The floor is always tile, the tables are standardized, the colors correspond to the brand’s palette, the menu is always the same, and the uniforms of the workers, is, well, uniform. Everything is prefabricated. The Taco Bell in North Carolina is the same as the Taco Bell in Georgia. A change of theme in the Starbucks in New York is registered in the Starbucks in California. The color scheme, the atmosphere, the cups, the decor come out of a design handbook. Think of how many businesses work according to this model: 7-11, Cracker Barrel, Walmart, McDonalds.

But a recent article on Wired.com explains how Starbucks is changing its design to something more local. The design teams of Starbucks are being told to make stores with a mind to the local aesthetic. According to the article, “The intense customization of stores is actually an ongoing effort to make the Starbucks brand a little less brand-y.” As the “designers become more familiar with their surroundings, they began to incorporate the communities’ stories into the designs.” Locally-informed design: and it’s not only Starbucks, either. Another article , also in Wired, looks at a similar case – only this one’s about office space. Tech businesses want their offices to look less like offices. The pictures of the new non-offices are quite lovely. The design process uses computer-generated blueprints that consider most and least used spaces to account for bottle-necking and to help people see each other often. “When you first hear it described,” the article explains, “NBBJ’s [the architectural company’s] computational design can sound like a somewhat manipulative scheme for mechanizing human behavior. Pleasure does not seem to have a place. But NBBJ’s architects insist that’s not true. “Data-driven design,” the sort of thinking that high-tech companies are already familiar with, “is about presenting options,” not answers, they say. And some options are all about “making people happier.”

In each case, the businesses want to look less like corporations alien to the town and inhospitable to the people who work and eat there, and more like an organic part of the town.              What are we to make of this? There is the sense in which Starbucks is realizing the same thing that localists have been advocating. How a place is built, what it is built with, the design, all speak of a geography, a climate, a history, a personality, practice and habit. How a place is should correspond with where it is. In another sense, this is still Starbucks, and Starbucks is not founded locally (unless you’re in Seattle). It is still international, still a corporation. Isn’t this disingenuous, a grasp at the appearance of being local, to respond to the demand for local coffeehouses, while the finances and ownership are elsewhere?  This seems to be a localism without consequences.

Starbucks has this much correct. Being local matters. A place can look like it belongs or not. But what is this look? Real wooden tables? A barista with creative tattoos? Knowing you haven’t seen a place like this anywhere else? Maybe the problem is with the definition of local.

While I have an intuitive sense that localism has much we need, much that could remedy our current ills, I know very little about what it actually is. I think this is in part because the ways in which we think about it assume a definition rather than provide one.

The obvious counterpoint to localism is globalism, especially noted in the case of industrial agriculture. The ability to make things faster and cheaper, and a steadily expanding market seem to offer something that the quaint mom and pop enterprise cannot compete against. Living standards rise as markets grow outwards.

Localism, on the contrary, says that certain things, small and subtle though they may be, are necessary for human flourishing, and are lost in the milieu of globalism. It is somehow better to buy food grown in the fields that you drive by on your way to work. A localist has in mind something like Hayek’s valuation of local knowledge. Market prices, on which the global market depends, emerge in part from the local prices, which themselves depend on local knowledge. Local knowledge is cultivated, though, with the cultivation of the locality. It needs a husbandry that globalism potentially neglects, devalues, or replaces. To that extent global prices could lose their accuracy.

Jake Meador and Rod Dreher recently exchanged articles about the influence of small-town living on local parishes and local economies. Certainly, it is good for a pastor to care about where he lives, instead of focusing on when he can move to a bigger church.  It is good for a farmer to be recognized and valued for his work of feeding the town. Small towns need the Church and small businesses if they are to live.

The comments on these articles, however, acted as a list of counter-examples, or at least difficulties. One commenter explained that he works from home on his computer. His job is remote. So he works in the town but for a business elsewhere. He might buy groceries in town. But his labor and the source of his money exists in other places. Many other commenters described similar scenarios.

The problem with emphasizing localism over globalism is that this emphasis is harder to prescribe than it is to identify in our own experience. Understanding localism primarily as against globalism does not define localism (or globalism). Living locally cannot not mean joining a tribe, completely isolated from the outside world. Local and global are permeated by each other. Every town is local and global. Coffee is not local to anywhere in the lower forty-eight, even if the coffee shop is. Consider a trader on the New York Stock Exchange. His job is the global markets and yet he knows when to tip his favorite bartender generously. He spends much on the local economy. He has small talk at his favorite halal cart, knows his tailor by name. He changes the price of aluminum in Europe in the morning and asks for the usual in the evening. Granted, a city in Idaho does not have a community of stock brokers, but more likely a community of farmers. Nonetheless, whether a place is a port city or Midwest town, it participates in varying degrees of global and local integration. And however localism is understood, surely it is must be hospitable to the stranger.

Consider Western expansion and the railroad system. American towns were not built with local living in mind. In fact, many of the early towns between the two coasts arose to serve families looking for their own land, looking to get out of town, and create a new life. Not only did those in-between towns often depend on supplies from the train coming in, but, given the motive for expansion, most were waypoints for people getting on the train headed out. Those towns had hotels, not neighborhoods, restaurants, not farmer’s markets. For the family heading west in 1850, the towns were what the family in 1950 called a drive-thru. You stopped for supplies and went on your way.

Describing localism as “not suburbia” or “against globalism” makes an assumption. It assumes what it is, by which to compare what it is not. But we need the is. What is localism? To think of localism in negative terms provides no insight into actually livinglocally, any more than telling someone to eat less sugar is the same as telling him to eat more fruit.  And to tell someone a story of the fruit your grandparents grew is not the same as handing him fruit to eat. There is much in globalism that needs clarified and tempered. But correction is not construction. Often, it is necessarily deconstructive. More specifically, what localism is not cannot answer what is praiseworthy or problematic about Starbucks design that appears local. Saying that Starbucks is global or is not how our grandparents got their coffee gets us nowhere.

Positive construction is already beginning, though. Dreher’s The Little Way of Ruthie Lemming is a splendid example of localism precisely because it is not about localism. By that I mean that Ruthie’s life is no more characterized by localism than a human being is characterized by having a head. To have a serious conversation simply about localism is somewhat bizarre. It is like attempting a serious conversation among so-called headists, arguing for headism, because people seem to have lost their heads. They may be right. We might have all lost our heads. But in focusing on our heads, we will not be able to understand what a head is, because the head is not understandable except as attached to a body, and the body attached to a soul. We understand what is real by what is alive. In a literal sense, we point at what is true.

We need to be able to point at what is true. And what is true, more than the quality of being local, are real towns. We need – as Dreher did – to look at actual towns.  We’ll have gained understanding of localism, globalism, flourishing, all joy and all sadness when we can point somewhere and say, not that it is local, but that it is a real place. To know the head, we do not need headism, but a human life. To understand local living, we do not need localism. We need villages, towns, cities. We want to understand the whole, not a part.

This requires artistic and literary work. We need for the village what Jane Jacobs did for the city, for the town’s history what Rod Dreher did for familial history, for mayorship what Aquinas wrote on kingship. We need good neighbors and good streets. We need good coffee, too, which means a global market and local coffee shops. We need places that are real, not over-against. We are not looking for the ideal place, not for the old place, not for the pessimistically real place. We need for the polis what the church gives for our spiritual lives: we need saintly towns.